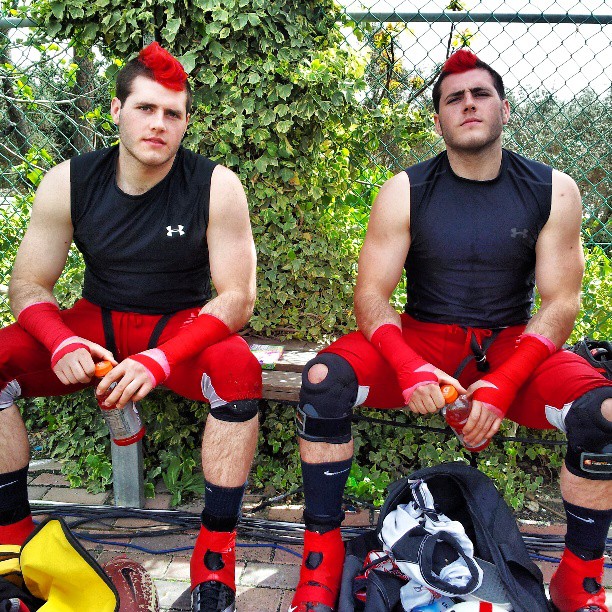 1. You feel compelled to pretend like you give a shit.

Feigning interest in his games/matches/tournaments/whateverthefucks is difficult; his team doesn’t win shit, and you really, really don’t care.

2. He thinks he and his boys run the social scene… and, unfortunately, it’s kind of true.

If he’s a football player, say, the Fall social scene at your (tiny) college undoubtedly revolves around his team’s losses (and wins). If they lose a big game against your rival school on a Saturday night, you won’t expect to turn up that evening. When the team is depressed, their house is out of commission, which means your going-out venues are critically limited. His defeatist attitude will also likely result in a belligerent drinking binge, so you’ll find yourself avoiding his cuddle company at all costs.

For the fact that, you know, he’s not a *serious* college athlete by taking his sport very, very seriously. Holy moly… this dude is in the weight room for like, at least an hour a day. What a haaardo (very, very impressive).

4. …Because he’s entered into a masculinity competition with himself (and his boys).

You’ve become desensitized to some extremely silly showings of *manhood,* many of which come at your expense. You’re walking across campus, his sweaty fingers curled around yours, when his coach suddenly materializes and he quickly uncurls those phalanges. Duhhh… real men—real athletes—don’t hold girls’ hands, ya dumb betch.

5. You can never win an argument over who has more work.

6. …So you have to work extra hard to spend time with him.

Yes, it’s true, he has a lot to do. These dudes are recruited under the premise that academics, and not athletics, are their priority. But they gotta shine bright on the field too, ya know? So, yeah, practice often gets in the way of cuddle time. You find yourself making unwanted sacrifices as a result.

7. He limits his extracurriculars, even if it means giving up something he really loves.

You have a really hard time grasping why lacrosse and photography are mutually exclusive activities. But sportzzz take precedence over everything, and you’ll just have to learn to understand that.

8. He “respects” your paltry displays of athleticism.

“At least you’re not, like, one of those NARPs who never works out.” Thanks, homie… flattered to know my minimal gym efforts elevate me above the rest of those sedentary nerds.

Jesus Christ, dude, I get it… Winter Is Coming, which means you’ll have to retire the cleats for a minute. Maybe get a little hyped that, whoa, that means we get to spend a little more time together…?

10. You have to be sympathetic to his futile efforts to quit.

There’s many a moment in all these guys’ collegiate athletic careers when they’re itching to *abandon the team.* He doesn’t get enough play time to justify the hours he spends away from school work (and you), and he bitches about it endlessly, threatening to quit but never following through. His whining gets real old real fast, but as a good, supportive girlfriend, you feel obliged to heed his mewls.