I just walked back alone from Diane’s open studio. The horse and all the cows were out, the air was cool, and the mountains and trees are the last of rural Virginia I’m going to see for a long while. Part of me would like to stay here and hide out from the world in safety and security.

The 5 Best Christmas Music Videos Of The 1980s 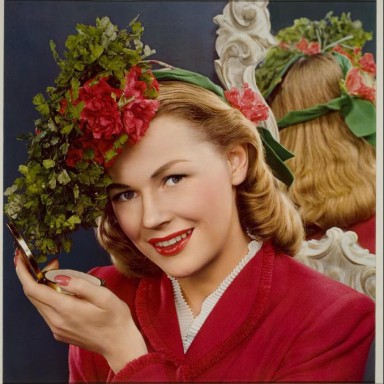 he best thing about the Hall and Oates Jingle Bell Rock video is: Everything. It’s the way they bop almost-but-not-quite in time with the music. It’s the cheesy special effects. It’s the rockin’ granny. It’s so very tongue-and-cheek, as if Daryll and John created it not for their contemporaries, but for the future.

30 Dumb Blonde Jokes That Will Actually Make You LOL

These terrible but hilarious jokes will makes you laugh, and maybe feel nostalgic for the 80s.

How do you know if you’re dating someone who can handle a sordid rendezvous? Someone worthy of being your partner in crime? In conjunction with the premier of ABC’s WICKED CITY, a crime drama featuring a notorious couple that wreaked havoc on Los Angeles’ gritty Sunset Strip in the 1980s, we’ve listed 15 telltale signs that your significant other is co-conspirator material.

The Whisky A Go-Go started out as a dance club in the fifties featuring caged Go-Go dancers and over the decades became one of the most iconic clubs on the Sunset Strip. In the 60s, house bands like the Doors graduated to international fame because of the exposure they got from playing the Whisky.

The 70s saw a thriving punk scene play there as well and while the Whisky fell on hard times financially in the 80s, the club still managed to feature some of the decade’s most iconic acts while they were still in their infancy.

Some of us just have too much personality for this decade. If you think you can’t handle the monotony of a desk job, maybe it’s because you were really meant for the lifestyle of a rocker. Specifically, a head-banging, hair-whipping 80s rocker. For decades, The Rainbow Bar & Grill in LA has been a premiere meeting place for musicians and their fans. But in no decade did it rock harder than the 80s, when bands like Mötley Crüe would frequent the bar and raise hell.

In anticipation of ABC’s upcoming series WICKED CITY, we paid homage to 80s rockers (and rockers at heart) everywhere.

Why Men Look Up To Tony Montana

He doesn’t let the fact that he is without education, power, money, or influence become roadblocks. Tony uses the tools he has—balls, decisiveness, and street smarts—to help him overcome every obstacle.

4 Reasons Why We Should Bring Back 1980s Hair

It was The Hair of Possibilities. Big Hair was the great equalizer: you didn’t notice if a person was maybe too thin or too heavy.

14 Valley Girl Insults From The 1980’s We Should Like, Totally Bring Back