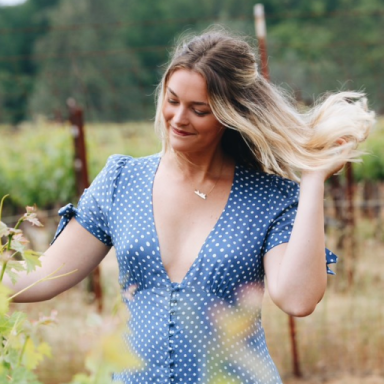 When you feel too deeply, it is a scary world. Feeling deeply is confusing and all-consuming at times. Sometimes it can feel like the best moment of your life, the greatest sex of your life, or maybe the most amazing meal of your life. Other times it feels like you’re drowning and you suddenly forgot how to swim or like you have an elephant on your chest that is made up entirely by intense emotions you didn’t know you could feel all at once. Some call this being unstable, but I call this being emotionally intelligent.

My whole life I have been told to some degree that I feel “too much”. My reactions or coping mechanisms may be viewed as over the top. The first person who told me I don’t actually feel “too much” was my Dad. He told me that what I was feeling was reflective of my emotional intelligence – a term I had never heard of before. I didn’t quite understand until I began reframing my own emotional depth as intelligence. Once I started viewing it as so, I was able to stop feeling ashamed of the vivid spectrum of emotions I could feel throughout a single day. When my view shifted from feeling out of emotional control to development of my own emotional intelligence, I began to understand the wide array of emotions that I felt more clearly. They were no longer watercolor nouns of emotions bleeding together; instead, they seemed to fit together like a paint by numbers sheet. It all started to connect that what was happening was actually a blessing in disguise rather than a curse of mental instability.

Emotional intelligence is something unique that not all people can develop. I am a 24-year-old woman, and the life I have already lived feels like it was riddled with every noun depicting emotion in the dictionary. What’s scary is that I (hopefully) have an entire portion of my life left to live and, most importantly, feel. I have lived a large portion of my life already being frustrated and frightened by the emotional surges I experience. The emotional surges that have been both positive and negative in nature. I have stayed up all hours of the night searching for a way to describe my feelings while being crippled by the anxiety of not knowing if there are words to describe the overwhelming sensation of “everything at once.” My life has been beautiful yet sprinkled with moments of pure fear, sadness, grief, and anxiety. I feel like my experiences far outweigh the time I have been on this earth, which I am mostly grateful for but sometimes deeply mad about. For each experience I have lived, I have come head to head with combinations of feelings that felt utterly out of my control. Feeling out of control while still being able to identify what you are feeling is extremely confusing. It’s frustrating at times, but it’s all going towards the investment of developing emotional intelligence.

I am writing this in a moment of clarity where my thoughts don’t feel like they are bouncing off the interior of my skull and getting trapped in the 100 trillion synapses in the human brain. This is a moment where I feel grateful and lucky for the life I have lived and the chaos that has graced my complicated mind. In a sudden moment like right now, I can feel my thoughts becoming less and less clear, because writing about emotional intelligence is like opening Pandora’s box. You begin to think deeply into feeling deeply, and that is a scary rabbit hole to go down. I don’t quite think I have ever gone down that rabbit hole completely, perhaps because of the fear of the unknown. Maybe it’s the fear of revisiting painful memories or the fear of thinking you could have done something better.

I believe a key trait of someone who is emotionally intelligent is perfectionism. Perfectionism, in my terms, is striving to fulfill the wants and needs of everyone else in order to gain acceptance and praise while avoiding any and all disappointment. As someone who is emotionally intelligent, you are constantly striving to understand not just your own emotions but everyone else’s. In some cases, your own emotions go to the wayside while your full attention goes toward understanding someone else’s. Emotional intelligence is meant to be independent, but sometimes it gets wrapped up in the feelings of other individuals. This leads to a great deal of confusion and sometimes pain. While neglecting to lean into your own feelings, you are trying to understand another’s emotions that aren’t yours to understand.

One of the most prominent experiences in many individuals’ lives that triggers an enormous emotional cascade is heartbreak. My 24 years of life has been filled with what I already feel like is too much heartbreak, although in the grand scheme of things, it’s a normal amount of instances. In the initial moments of heartbreak, I hate that I can’t turn off my emotions or close the floodgates for what’s about to be a wild ride down Emotional Lane. I hate that I can’t just pretend that I don’t know what I am feeling, because I know exactly what I am feeling. I am feeling sad, unworthy, helpless, lonely, robbed, and heartbroken. Although I have felt all those things before, it’s difficult to see the other side of the tidal wave coming barreling into your life.

Those days, weeks, and months that follow heartbreak are some of the most unpredictable. For instance, today, four days out from heartbreak, I was content when I woke up, and then in a matter of minutes I felt like a part of me was missing – because it was. That feeling is overwhelming emptiness, and it flat out sucks but I recognized it and knew what I was feeling. Being able to identify what I am feeling in a moment like that, when you feel a sensation of quite literally nothing, showed me how far I had come with my own emotional intelligence. In moments like that, I don’t feel like crying or ignoring the world I feel familiarity, and with familiarity comes routine. You know you can get up and walk to the bathroom; you know you can go downstairs and make breakfast; you know you can go on with your day. By doing mundane tasks, you’re actually filling the empty space of mildly loud emotions with actions – and actions speak louder than words.

Every process involved in the aftermath of heartbreak has no rhyme or reason. There’s no good reason for not showering for several days or ignoring the homework assignments you should be doing. But it happens, and that’s just the unfortunate part of the process of feeling too deeply sometimes. Sometimes being a complete slacker is what you need in order to feel every emotion being thrown your way. One second you’re feeling fantastic, the next you’re taken aback by an overwhelming feeling of sadness or loneliness. Just because everything else in your life continues moving doesn’t mean you have to continue moving for that given second. You can stop and lean into the emotions you are feeling.

Feeling deeply is not something to be ashamed of — in fact, it’s something to be proud of because you have experienced enough in your life (and overcome enough) to have developed your own emotional intelligence. Being emotionally intelligent is phenomenally beautiful; it’s an incredible attribute that unfortunately not all people can handle. Perhaps that’s because they don’t connect with allowing emotions to take over, but that’s not our battle to fight. The only battle we need to acknowledge is our own which resides in our minds.

Emotional intelligence is an eternally evolving form of knowledge. It’s your responsibility to nourish it and allow it to grow through heartbreak. Continue to strive towards improving your emotional intelligence, lean into your feelings, and most importantly, don’t be scared to feel “too much.”

My secret talent is getting tired without doing anything.