It’s midsummer in Nicaragua. The sky is a cerulean blue while the treacherously hot sun thickens the air. As I gaze out my bus window – just one of many bus rides I’ll take during my three months backpacking Central America – my eyes feast on the drama of everyday life. Three street dogs cross the busy boulevard, our chicken bus barely missing them. A Nica family artfully splayed on their front stoop, three whole generations in dirty plastic lawn chairs, talking little in the midday heat. Young children jump sidewalk cracks in their Catholic school uniforms, all recently freed from the nuns, and giddy. Street art, trash, and coconut palms stretch along the main highway, leading to the countryside.

This is modern Managua, the setting of la Revolucíon. Crayon-colored street art and the remnants of revolutionary murals haunt the city’s corners and corridors. On the side of a modest skyscraper towards the center of town, a mural of Nicaragua’s biggest revolutionary hero and father of the socialist state, Augusto Sandino, is painted twenty-feet high, completely black, a shadow of the past in an old vaquero hat. El Parque del ALBA, which features the portraits of such revered leaders as Ernesto “Che” Guevara, Fidel Castro, and Hugo Chavez, decorates the center esplanade.

I am utterly charmed by this place and confounded by it.

I’ve been a backpacker for many years, and my preferred way of traveling has taught me a few things. All humans, regardless of origin, create a cultural dictionary in order to define their vision of history. Words like “socialism”, “democracy”, “revolution”, and “freedom” take on different meanings once you’ve met a Nicaraguan soldier who actually fought in the Revolution, or lived in a tent on a mountainside where Guatemalan rebels hid from the government. Images change too. Street art in San Jose and San Salvador becomes the community loudspeaker, while the Che Guevara tattoo on that Nicaraguan soldier’s left breast, over his heart, becomes something more than a token symbol. Though that same soldier lost an eye during the war, he sees things more clearly than others ever will. Living art still breathes, like fading hieroglyphs, or a ghost, and it tells a story to those who listen.

I spent most of my time abroad in Nicaragua, and I found myself hearing a different version of the 1979 Revolution than what I was raised on. Most of my extended family (admittedly quite Republican, and Southern) thought I was insane to travel through Central America, given the unrest and violence there in the 80’s. I know they fear what they’ve been told from thousands of miles away, by newscasters with shiny teeth and six-figure paychecks. To Nicaraguans, the Revolution was the moment they were given a sense of freedom, having long struggled against Spanish colonialists, and finally the U.S.-supported Somoza dictatorship. To many Americans, the Revolution was when Nicaraguan socialist rebels murdered their own people, anarchy ensued, and the Contras were bankrolled to clean up the mess.

While contemporary Nicaragua is very much shaped by this young revolution, classifying it as a present-day “socialist” society is sort of a misnomer. Following the coup that collapsed the Somoza political dynasty in 1979, the U.S. launched a wave of defense against instability in the region: a Contra guerilla war headquartered in nearby Honduras that lasted about a decade, and killed thousands and thousands – whole communities – of Nicaraguans. The U.S.’s influence in Central America throughout history has always been a palpable thing – starting famously with William Walker, an American “filibuster” who was sent to Costa Rica in 1856 with the intention of extending American imperial interests and enslaving the Costa Rican and Nicaraguan peoples. A Costa Rican soldier named Juan Santamaría and his guerilla defenses organized against and defeated Walker, and Santamaría is now openly considered a war hero against U.S. imperialism (there is, also, a major airport named after him).

Today, a U.S.-influenced Nicaragua is the second-poorest country in the Western Hemisphere. The labor co-operatives established by the Sandinistas were disbanded starting in the early 1990s, coinciding with the FSLN’s election loss in 1990 and structural adjustment policies pushed by the U.S. that attempted to make Nicaragua more open to liberal trade and development. The revolutionary murals that characterized the Sandinista period and decorated Managua and other major cities were steadily destroyed starting at this time; this includes a mural rendition of an infamous photo of captured American Contra soldier and CIA employee Eugene Hasenfus, accompanied by Sandino’s words, loosely translated to: “More than one battalion of your blonde invaders will bite the dust”. The revolutionary art movement in Nicaragua is represented by both its streets and its people, and can be dug up from texts like David Kunzle’s Murals of Revolutionary Nicaragua, 1979 – 1992. Texts like these captures how important the mural expression movement is to this country’s history, and, in many instances, act as the only record that most of these murals existed.

Meanwhile, in the “Northern Triangle” region of Honduras, El Salvador, and Guatemala, gang violence and organized crime dominate these countries’ politics and geography. The pressures from gang turf wars and forced recruitments affect millions of lives, and this region has had the highest consecutive homicide rate in the Western Hemisphere for years. All three of these countries have civil war legacies that link strongly to this modern form of violence. “People talk about violence and gangs, but nobody connects it to the war, which they should,” states photojournalist James Gonzalez, who documented for the New York Times how Guatemalans affected by the civil war and gang violence pursue government recognition and justice for war crimes. “The effects of the war are so current. To me, that has been a massive push in the whole immigration issue,” he says. Government ignorance and impunity only worsen the gang violence, and the region is embroiled in a refugee crisis that has touched every single family.

“Choices are made every day, but [they’re] choosing between the worst possible situations”, says Hannah Perls, the Development Director for Foundation Cristosal, a faith-based nonprofit in San Salvador. She works with families and communities directly affected by organized crime, on projects like safe houses and a Refugee Network that builds capacity for community development. Contemporary El Salvador has the highest concentration of gang members in Central America. During a civil war that spanned from more than a decade, two million Salvadorans (out of a population of approximately 6 million) fled the country. Refugee communities were established in Los Angeles, sometimes in the form of illegal gangs, who when deported would bring the gang dynamic back to El Salvador. These organized crime gangs leave their impression on the community every day, with forced recruitments, threats of rape or kidnapping, and rampant homicide.

Despite the fact that El Salvador has the highest concentration of gang members in Central America and one of the highest homicide rates in the world, Perls points out that the government of El Salvador doesn’t actually recognize that it has “internally-displaced peoples” created by community violence. Many families find themselves forced to move two to three times in their own country, living constantly in a purgatorial middle ground between vicious street war and lack of government recognition or assistance. Endless marginales (“slums”) are formed throughout the country, which only serve to propagate conditions that are conducive to gangs and continue the cycle of poverty.

For the majority of Salvadorans, there are insurmountable barriers to leaving the country. Those who seek to apply for asylum often fall through the cracks because they can’t cite the internationally recognized reasons for asylum like civil war, genocide, or other forms of government persecution. They can’t check those boxes that don’t exist specifically for them, but often constitute the majority who are affected by gang violence or forced recruitment: “young”, “impoverished”, “vulnerable”. The visa application process is also fraught with difficulties. The U.S. embassy in San Salvador, one of the largest in the world after Baghdad, is an intimidating, Orwellian structure; its visa application process is completely in English, and the fee to apply ($160) is steep. Many Salvadorans find themselves forced to illegally immigrate to North America, making a dangerous voyage on a rickety train called “the Beast” through the belly of Mexico to the Texan border.

El Salvador’s history of civil war and its current problems with organized crime created an unstable and malleable society, and one that is very open to outside influence. In 1991, President George H. W. Bush granted $42.5 million in military aid to the Salvadoran government and its army, whose tactics for fighting FMLN communist rebels included death squads, assassination of pro-Communist political and intellectual figures, and ultimately resulted in the disappearances and deaths of thousands of citizens. The Salvadoran Civil War ended in 1992, and as a longtime proxy for the Cold War, the desire was that a postwar El Salvador would be one of profit, development, and freedom. In 2000, the U.S. helped open the Salvadoran economy as a free trade zone, and the currency was changed from the colon to the U.S. dollar. El Salvador is a longtime cash crop economy whose main exports are coffee and sugar cane, and when post-war aid packages came in for developing commercial industries and the economy, the fourteen richest families in El Salvador, dubbed “Los Catorce”, benefited hugely. Today, Perls laments that there’s “no investment towards human capital” and how post-war Salvadoran society is not one of “citizens”, but of perfectly packaged consumers. 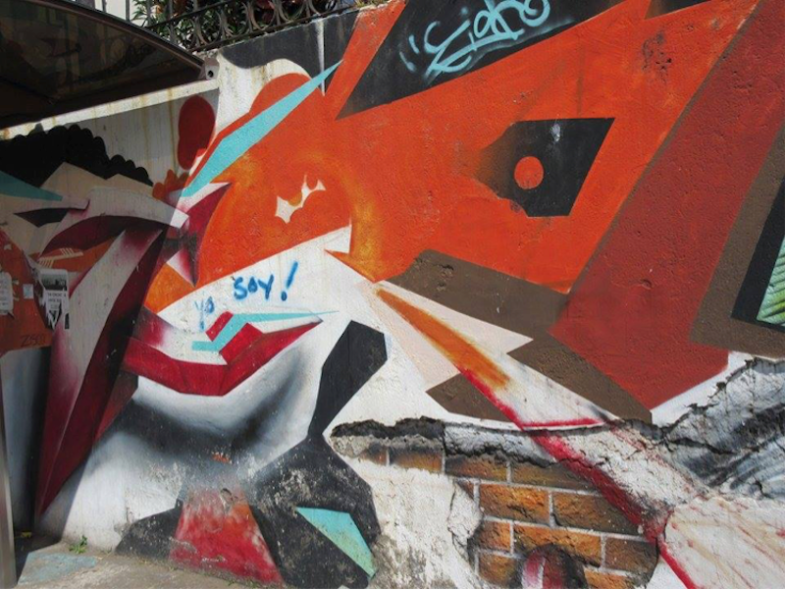 The popular arts movement in El Salvador is a huge reflection of consumerism in the country. Music is a big pastime, and El Salvador’s Festival of Jazz (sponsored by La Constancia, or El Salvador’s Anheuser-Busch equivalent) is one of the biggest in Central America. Some characteristic exploitation of artists by large brands definitely occurs. Similar to the Ex Cops’ SXSW tiff with McDonald’s – “There isn’t a budget for an artist fee (unfortunately)” – as well as Taylor Swift’s recent open letter to Apple, a group of artists in this year’s Jazz Festival in February had to speak up against unfair pay practices by corporations. Gerardo Alvarado, a born and bred Salvadoran and a saxophonist who has performed in the Festival, acknowledges that companies run by billionaires try and rely on “exposure” in order to exploit artists who, already, do the majority of their life’s work for little to no pay. “It’s a monopoly of brands, not a movement of culture”, says Alvarado, who led his fellow musicians in demanding a fair pay rate from the Festival.

It’s not all doom and globalization, however – Perls and Alvarado note how the recent election of Nayib Bukele for San Salvador’s Mayor is a big step forward for the whole country. Considered the “hip” new face of the FMLN, he’s already acknowledged many of the problems that face Salvadoran youth and has created a platform specifically for young people.

Art has such a definitive place within our memory of legacies, and our shaping of the future. As a traveler in Central America, I got to engage with this visual culture every day. I came to understand that what we leave behind is essential to our decisions for our ideal world. Perhaps by looking at others’ history, American youth like myself have some hope of creating a better future – one who’s past and current bloodshed is not in vain. Our sacrifices of the past shouldn’t be for nothing.

That’s why my message, and my hope, as a writer is this: while we continue to create art, we can openly pray for “anarchy” – and we can openly welcome change. This human element of chaos may be the very thing that saves the world.