We all have our insecurities and fears, but what happens when these get in the way of leading a normal, functional life?

There is little research on it, and only in the upcoming DSM-V will the disorder finally be given an official place in the psychiatric text. People with Body Dysmorphic Disorder see themselves as hideous, no matter how they look, the mirror always shows something frightfully ugly. Body image issues, eating disorders, social anxiety, and obsessive compulsive disorder weave themselves into BDD and it is not a surprise that drug and alcohol use is often a means to self-medication.

My mind and body’s dark journey into this disease began after reading the book, The Picture of Dorian Gray, and from there Dorian’s obsession with youth and beauty leapt off the page and became my own. The only thing that held any value in the world became Beauty, and I lived this to the tee – spending hours working out, tanning, whitening, shaving, tweezing, dyeing.

I researched new cosmetic procedures, making lists of what I wanted to save for: laser genesis, fraxel laser treatment, buccal fat removal. I became an expert on skin care and fascinated with the rejuvenating powers of peels, acids, and retinoids. However, there was always something more that could be done, another face mask to shrink my pores or another skin care treatment to be discovered.

The obsessive grooming rituals and thought pattern took over my life, and the disease became my identity. I went from being a carefree, social college girl to becoming someone I would never have recognized – anxious, nervous, kept inside the house from fear of being seen in public.

When company came over, I would retreat to my room, not daring to offend anyone with the hideousness of my face. I wore baggy clothes and long pants to the beach, and tried to become invisible – if no one saw me, they could not notice my flaws.

After two graduate schools from top universities and a military career ended abruptly, I knew I had to face my demons head on. My life was stagnant, plateaued since the day I read those words, “Beauty is the wonder of wonders…At least it is not so superficial as thought…” 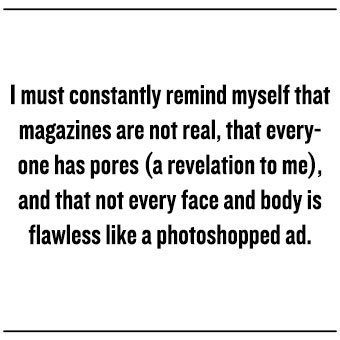 Now, I am trying to live with my BDD, and use it as a means for self-improvement, rather than as a bear trap. I do not think I will ever be truly content with my physical appearance, but now I have to learn to put that aside and get on with the day and my life. Life doesn’t wait for anyone or anything. I have to remind myself each morning that this prison of the body is just temporary, and I find solace in knowing the spirit will soon be free.

I must constantly remind myself that magazines are not real, that everyone has pores (a revelation to me), and that not every face and body is flawless like a photoshopped ad.  It may seem obvious to some, but to those with BDD, we fail to realize just how similar we are to the movie stars on the big screen, and even to the people around us. We are not hideous monsters in comparison – though we may be far from perfect, our eyes tend to distort our own image as much as a fun house mirror.

It is a basic human tendency for people to seek Beauty. As Keats wrote, “Beauty is truth, truth beauty, that is all ye know on Earth and all ye need to know.” We want faces to be symmetrical and things to be beautiful because we associate beauty with truth. We need to see ourselves as beautiful in our own way, and to be the best version of  ourselves. I used to think looked like an alien, something common to those with BDD.

Keep doing, keep improving, keep getting better. This might not be a solution to BDD, but if we do this while accepting our steps in progress, the ugliness will fade away.

My mindset has not changed, however accepting it has proven extremely healing. Using the serenity prayer as a backdrop, I shall accept what I cannot change and take looking like an alien as a neutral fact, a nonchalance of life. However, I have the power to change some things, and I will do everything I can to be the prettiest alien I can be. I will go tanning, do copious amounts of ballet to lengthen my body, and spend thousands of dollars a year on firming lotions, peels, teeth whiteners, thermogenics – anything to improve my looks. However, life with all its responsibilities must come first, and not be put into the background by the sole goal of Beauty.

Used in the right doses, perhaps these obsessions and rituals may be the cure to “ugliness,” imagined or not. Keep doing, keep improving, keep getting better. This might not be a solution to BDD, but if we do this while accepting our steps in progress, the ugliness will fade away. We will obsess less and less because we will literally be prettier – just don’t fixate all that freed up energy on a former flaw – that’s the rub. You need to accept you look better, keep up the good work, and relax. Chill out.

Your Body Is Talking—Are You Listening?