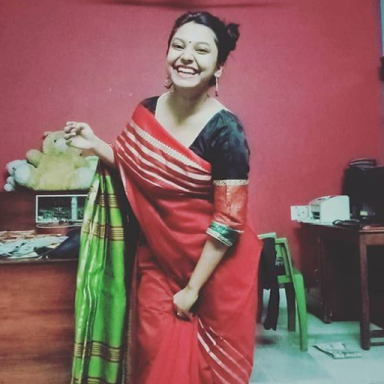 Back when I was a kid, the winters here used to be lazy. I live in a small town, away from the commotion of the city. The afternoon sun shone rather sluggishly, as if inactivity was the motto of the day. The neighborhood went quiet and languid at noon and people would mostly doze off after a heavy brunch. In fact, if you listened closely enough, you could hear people snoring in unison. My mother waited for me to return from school so she could feed me in a hurry and put me to sleep. I would feign sleep on most days and wait for her to fall asleep instead.

I used to be smart but very stubborn. I was extremely restless and my parents would go crazy trying to make me sit at one place for more than a minute. I remember how every winter afternoon I used to sneak out of my house and wait for my friends behind the huge mango trees of my neighbor’s garden. There were five of them, all boys, dressed in shorts and hoodies. Among them, I was the only girl, wearing the same stuff I borrowed from my brother’s wardrobe without asking him. We would go fishing for carp in the neighbor’s pond or sometimes pluck oranges or dig out carrots from the field. The owner of the garden never found out who did it, until one day when he tied Juno to a mango tree and did not leave him for hours. My Dad nearly killed me that day, but everybody else laughed at it. After all, we were just kids making memories.

Juno never liked the idea of stealing from someone. He would accompany me every day to keep an eye on me when I would climb trees or just jump in the pond for no reason at all. He did not trust my immensely impulsive nature and he knew I always had a way to fall into trouble. We were not even 10 years old then, but my Dad used to say his eyes were always bursting with wisdom. Polite, courteous, and awfully intellectual, he was the kind of kid my parents could only dream of. I would sometimes wonder how in the world is he even my best friend.

He would help me with my homework every evening and teach me how to play the guitar. His taste in music was the most beautiful thing in the world. He would listen to Beatles and make mix tapes for me and was often found looking out of the window, lost and humming his all-time favorite, Norwegian Wood. I now wonder how a ten year old could understand the lyrics to that song.

Juno was a different kind, but I knew him like the back of my hand since the day I was born. No, not just metaphorically — we even shared the same birthday.

We were poles apart, but he was my wonderwall.

I remember distinctly that one time we did not see each other for six months. He was away with his family and nobody told me where. I was upset with him for being so far off lately because I could not figure out why, for the first time in 16 years, he had to just disappear. We were in the ninth then and I hated going to school without him, and why would I not? I did not have any other friends.

It was winter again when he returned home. I was so furious that I ditched his calls and texts. It was New Year’s Eve when I finally gave up. Juno got me chocolates and a mixtape of all my favorite Pink Floyd songs. We sat on the terrace at midnight, watching the firecrackers bloom all across the sky when the clock struck 12. He sat with his guitar under the moonlight, his eyes gleaming and his fingers playing ‘Wish you were here’ as I sang loud and clear like it was the happiest day of my life.

My best friend had come back to me and I did not have to worry about being alone anymore. I could just look at him and know he was my person, my own human. And sometimes in life, that is all that you need — somebody to accept you as you are and look at you like they have not seen anything more calming.

Winters were not adventurous anymore after I grew up. I came back from school one such winter afternoon back in 2011, hoping I would find mom screaming at me for being so late. But everything was quiet. I called for mom and she peeped out of the kitchen looking like she had woken up from the worst nightmare of her life. She did not say anything, just ran towards me and hugged me tight, rubbing my back vigorously. Her tears made my shirt wet and I shrugged her away. I kept on asking her what was wrong but she did not answer. I imagined all the worst things possible, but nothing made sense.

Then suddenly, as if within a nanosecond, my world fell apart. I dialed Juno’s cell phone. He was absent from school for a week, and again, I did not have any idea about his whereabouts. I dialed him 20 times in a row like a mad person, sweating profusely. My mom kept sobbing silently at my side when suddenly someone picked up. It was Juno’s mother, and for some reason, my heart stopped. My voice breaking over the call, I asked her where he was, and she broke down. Her words made it sound like she had been crying for weeks.

She told me she loved me and that Juno loved me too, but he had to go away; his time was up.

He had brain cancer and nothing they did would keep him alive anymore.

My world and everything in and around it felt obscure. Nothing made sense anymore; nothing really mattered. I now understood the reason behind his severe headaches. He would run to my house and sleep on the couch only so that I could massage his forehead and put him to sleep. I used to stay up all night beside him. Seeing him in pain would rip me apart.

That day, I gave up on the world, on my belief system, my life, my dreams. I remember how I ran to his place after the phone call, barefoot, tears flowing like my breathing would stop. In that moment, for the first time in my life, I felt empty, still, inactive. That was the day I lost myself.

Today, six years later, I still do not know where I am or what I am doing. I’m lost in this dreary maze of being alive and not existing at the same time.

Juno was my lifeline, my crazy diamond, my safe space.

As my eyes are filled with tears right now; my vision blurred. I am thinking of how far I’ve come and how further I could still go alone. And no matter how many times I write about this, I am never going to find my peace of mind.

The 6 Things The Most Productive People Do Every Day

Fighting Loneliness Will Save Your Life