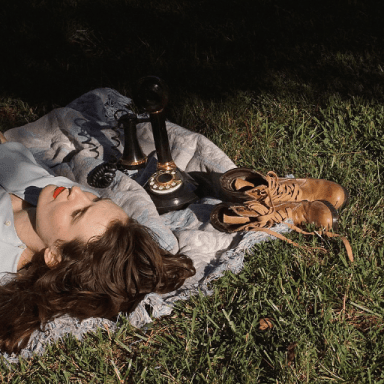 The thought of work looms over me; I’m an adult now. Bills are due. However, they aren’t piled high in envelopes like dad’s used to be. I pay everything automatically. The money goes out like water down a drain. I never see it, never touch it. It’s the idea of something.

When I moved into this apartment in January, more bills seemed like a good idea. After all, I’m 23 going on 24. That’s practically a dinosaur to a high schooler. “It’s time to move on,” I thought. “This is my big break,” I said.

I approached adulthood as a big, independent FU to all the people who picked on me, doubted me, or made me feel invisible during my youth. My maturity was, and always has been, my trump card, a way for me to simultaneously win and transcend the game. You can’t get hurt if you don’t play. Isn’t that winning?

So to me, moving into my own apartment was the trump card to end all trump cards, the holy grail of being an early-20-something-year-old. It was my solution to transcending the game teenagers play, lining up their experiences like pictures in a museum for the inspection of their friends.

“Yeah, that’s cool but my story is WAY cooler. We were all trashed at the Millers’ last weekend, since Jake’s parents were in San Diego visiting his sister. He was so fucked up, he jumped out a window and shattered their glass patio table. We had to tell Mr. Miller it was a rouge football but we all know it was Jake. Lauren told me he was probably trying to avoid being seen coming out of the bathroom with Sabrina since she heard them, ya know, having sex. So gross, right?! But what did you want to tell me about your dance class?”

I screamed my success from imaginary rooftops. I was finally free. In the museum of experiences, my transition into adulthood felt like the Mona Lisa. Buried deep inside a museum with a name the cool kids couldn’t pronounce, unpredictably small but with great impact, there was my treasure (and my trump card).

I looked at the bills each month with a smile on my face, watched the money wash out of my accounts, and said “I can do this.” I was proud of it. No more rogue footballs, my house was The Fucking Louvre.

The trouble with using a trump card is that, although you might not be totally playing, it implies you still care about the game. Enough to hold on to a secret weapon of transcendence, folded neatly between your pawn cards, hidden just so by the angle of your thumb.

I wanted their gaping mouths and dumbfounded eyes on MY masterpiece. Our experiences all lined up, I wanted mine to matter the most, to finally be the showstopper in an ocean of stories about the Millers. I made it, didn’t I? I won, you weirdos. Now where’s my trophy so we can get on with our lives?

I didn’t realize, maybe from my lack of participation in the game as an actual teenager, that responsibility doesn’t win you recognition. High schoolers don’t award you their approval for being a grown up. All that matters is what’s cool and what’s not, and paying bills is decidedly NOT. Having an allowance: COOL! Paying for car insurance: not so much. Fortnite holds the attention of the masses longer than the Mona Lisa these days. An invaluable painting over 500 years old? Yeah, not cool.

Over six years out of high school, I played the trump card and still got played. I thought, after 11 years of mandatory education (I graduated early), that independence in the presence of youth was a good place to peak. You’re still young, beautiful, and financially capable of enjoying the bars you once used a fake to get into (I literally never had a fake, just FYI). I suffered a lot through college at the hands of that belief. I treated it as a means to adulthood and rolled my eyes at the newest iterations of stories about the Millers, unable to enjoy it for what it was.

But this, this one bedroom apartment with a washer-dryer in the best part of town, is not my peak. It’s just a place where I live and on the loneliest of nights, I miss my dad’s stack of bills and the way the door slammed when he came home. I miss dinner by the fireplace and Saturday morning drives. Because now I’m just as clueless as a high schooler, but rent’s due and the person I hoped would care is too busy telling stories about the Millers instead of looking at the Mona Lisa.

Shawna is a 26-year-old writer, artist, and photographer.

It’s Okay That I Wasn’t Enough For You