I love reminiscing about past experiences. I’ve been known to lock myself in my room and just look through pictures for hours, blocking away the present moment and just engaging fully with my past. Sometimes my reminiscing can be in regards to a vacation or just an event that left a mark on me. For the most part, I’m able to snap back into reality after a quick pity session.

Not so much anymore.

Not too long ago, Facebook introduced its response to the popular app, Timehop, known as “On This Day.” Like Timehop, this feature informs you on your Facebook activity on said day. Of course this depends on how old or new your account is. If you’re like me and got on the Facebook train early on, then it can go back eight years.

Sometimes an embarrassing conversation between you and your friends will show up. You know, back when people would religiously comment on your wall. Other times it will show you who you became friends with on said day. Most of the time, it’s quite innocent. You take the past reminders with a grain of a salt. It’s harmless fun and self-deprecating at times.

Well, recently I’ve allowed myself to get too caught up with my past.

2015 as a whole was the best year of my life. I graduated college, traveled, and finally found friends who encourage and challenge me. This time last year found me studying abroad. This week last year, specifically, found me on spring break in Santorini, Paris, Rome and Naples. What more could a twenty year old want? I felt like I had it all and each day I reminded myself of how lucky I was. Back home, friends were studying for exams and working doubles. Meanwhile, I gallivanted around Europe with no worries except for where I was going to eat. 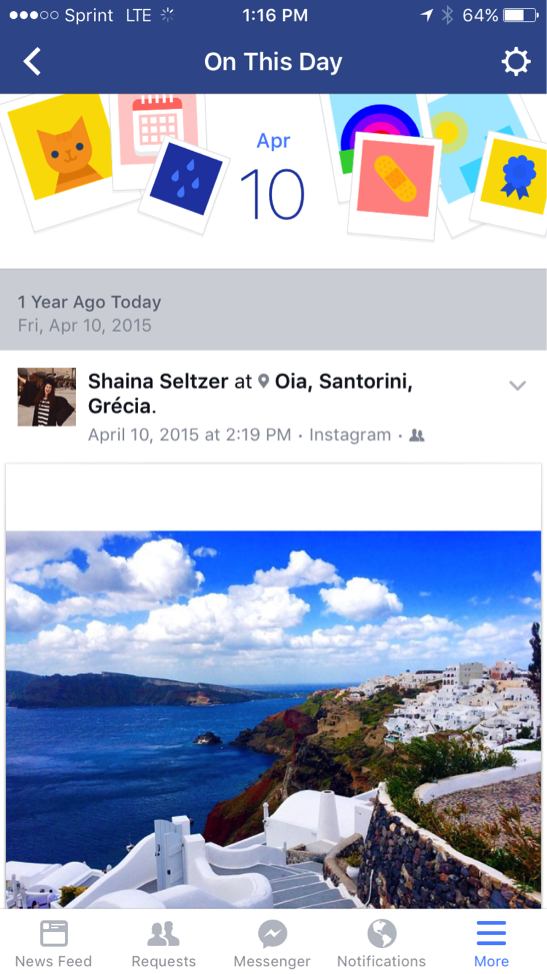 Then came 2016 and that “life high” came crashing down in full force. It’s not that this year has been relatively bad, but it’s not a Grecian vacation or an entire six months in England.

The anniversary of me leaving for England was a personal challenge. I woke up that morning and Facebook reminded me that “on this day” I left Florida for bigger and much better things. This was in January. April has since shown its skin and my habit of looking at my past has gotten a tad out of hand.

I’ll send my friend reminders of what we did this time last year and we both allow ourselves to be engulfed with pity. It’s a crash and burn, but most importantly, it takes way from the present.

I’m not condoning this behavior and I don’t think it’s relatively healthy by any means. Is it cathartic? Sure. But, like anything in life, it can be too much.

This is the first step of my recovery. My New Year’s resolution was to be more in tuned with the present and so far, I’m doing a very bad job. It’s going to change though and I truly think that I’ll be able to find a happy medium. One that can allow me to reminisce, but still be fully aware of what’s happening right in front of me.