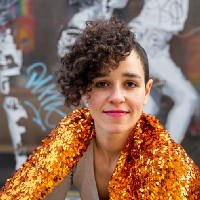 Almost a year into living together, Phil and I decided to open up our relationship. We thought it was the only way to prevent breaking up.

I wanted to have a baby in the next few years and he didn’t. So we decided to date others in hopes that I would be able to find a partner who wanted to have children in place of him.

We knew it would be an abnormal relationship — living together while I tried to find someone who wanted to be the father of my child. Still, we were optimistic. He, because it would mean he could stay with me without worrying about fatherhood. And I, because I had been interested in having an open relationship from the start and now this was my chance to realize that. It seemed like the perfect solution.

To get some guidance on how to move forward, we went to a polyamory discussion group in Berlin.

“One of my partners has children, and it works out great,” one participant told me when I explained our predicament. Another member suggested we use OkCupid to find dates since on that platform you can declare yourself as non-monogamous. After the meetup, we felt confident in our decision to open up.

But what works in theory, does not always work in practice.

For one, I hated the process of trying to meet someone so specific online. I created profiles on two apps geared toward people open to less traditional relationship structures: OkCupid and Feeld on which I wrote bios which looked something like this:

“Looking for someone who is interested in having children in the next few years. By the way, I live with my boyfriend.”

After hitting publish, I spent the next days cringing as I thought back to it. I would not want to date someone with a bio like mine. It felt more like I was looking for the perfect bike, not the perfect date. “Here’s the exact product I want. Give it to me.” That was not how I wanted to interact with romantic prospects. That was not how I imagined my long-desired open relationship to look.

So I removed the part about wanting a child and wrote only that I’m polyamorous and live with my boyfriend. That would narrow everything down enough without the additional information about wanting children.

After two weeks of swiping and matching with a few people, I ended up chatting with one guy, who seemed attractive and smart.

We went on a lunch date and had a nice conversation. However, there was no spark, and while we were talking, I had this feeling that my boyfriend was there at the table with us. I couldn’t completely open myself up to this new person. I went home disappointed and frustrated.

Tapping into my single self

I didn’t want to keep wasting my time looking through profiles, which gave me close to no information. I knew how to meet people out in the wild when I was single, I just needed to tap into that mindset. Dating needed to be fun — not a job, if this was going to work. And it needed to work to save my relationship.

I had to put myself out there and be open. I had to make room for someone else. I had to have the mindset that I’m not consumed by my live-in partner and that I have more love to give.

Once I rethought the way I would approach my new dating life, I ended up meeting two guys at roughly the same time. One was a guy I’d met traveling in Sri Lanka a few years ago, who also happened to now live in Berlin.

The other was a musician I’d been following for a few years, who I randomly ran into at the boulder gym and asked for his number.

I hung out with both of them for the first time during the same week. I felt a connection with both men, and I felt reinvigorated after spending the last months feeling directionless and uncertain of my future.

But back home, things were messy.

One day I was making dinner and listening to Nils Frahm, an artist one of my new dates had recommended. When my ex came back from work, he asked me who I was listening to. My answer and the backstory put him in a bad mood for the rest of the evening.

Another time, as we were lying in bed, I said “I have a date on Wednesday.”

“Did you have to tell me that right now before we go to sleep?” he asked.

He wanted to be open-minded and accept this was now our life, but in his heart, he didn’t want me to see other people, and it wore on him.

As I went on more dates, he tried to bargain with me. “Can you only see them once per month?” he suggested. “Can you wait until I meet someone else too?”

I tried to understand his perspective, but I was also losing my patience. When he’d told me he didn’t want children, it broke me. The future I’d imagined had disappeared. I knew it wasn’t his fault he’d changed his mind, but I felt that now, he owed me this. He needed to be okay with an open relationship, something I’d wanted from the beginning but had put on the wayside for his sake.

Furthermore, I had started connecting with people — real people, with feelings. And I was starting to care about them too. I wanted to treat them with respect.

I couldn’t only see them once per month. So I kept going out on dates, and Phil and I kept arguing. He broke up with me once, and the next day, we got back together again.

Then one day, he suggested. “Let’s try working out having kids together again.”

But I knew it was just a desperate attempt to return to the relationship we’d once had.

It hurt me to see him in pain. I wanted to have a healthy polyamorous relationship like the people at that meetup seemed to have. I wanted to keep loving Phil.

It wasn’t that I cared for either of these new men more than Phil. But I’d tasted that excitement, I’d started to feel what it’s like to connect with others again, and I loved that feeling. I could no longer put my relationship, one which might not have had a real future, above all of that.

There were too many reasons we were incompatible, too many ways we didn’t see eye to eye. So finally, I put my foot down and broke up with him. And it was the hardest decision I’ve ever made.

Reflecting on the end

For a while, I thought that because I was the one who wanted to date others, the breakup was my fault.

All he wanted was to be with me and me alone. All he wanted was what all of our movies, books, TV series, family, and friends hammer into us multiple times per day that we should all want: a “normal” relationship with one person.

I was the one who wanted what a person in love should not want: to have romantic relationships with multiple people. And thus, I felt like I was to blame for it not working out between us.

But recently, I realized that’s bullshit.

His pain came from my happiness

Just as he is happier in an exclusive relationship, I am happier in an open one. And ultimately his pain came from me doing what makes me happy. I don’t need to feel guilty about that.

Still, my heart hurts sitting on this couch that we picked out together on our trip to Ikea when we were planning the rest of our lives together. The one where we used to read and drink coffee on Saturday mornings. The one where he’d start to touch me, and we’d undress before going to the bedroom.

I loved how much he loved me. I loved how loved he made me feel. The way he looked at me, the way he admired me.

When I think of him, my bones shake and hollow with his absence.

But he doesn’t. And that means he doesn’t want me, all of me.

Our disagreement surrounding having a baby was the start of our problems and the reason I gave all my friends and family and even myself, when asked why we’d broken up. But in fact, I was afraid to say the other reason: I didn’t want to give up dating other people.

But I’m not afraid anymore.

I don’t need to own the person I love. I don’t need to limit the connections or love they can feel with others in order to feel secure about myself or my relationship.

We broke up because I wanted to see other people. It’s not his fault, but it’s not mine either.

A longterm monogamous relationship structure doesn’t work for so many of us. And our society still doesn’t recognize that.

But it can and will one day. And that starts here.