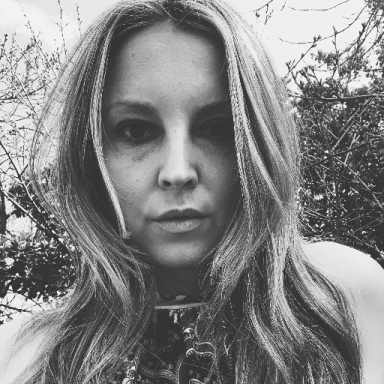 Fast forward to when I was older, around 20 years old, I became addicted to clitoral orgasms. I would have five clitoral orgasms a day but I always felt drained from having them. It was like I was hungry and would go to McDonalds to eat, it felt good at the time but left me feeling so unsatisfied.

Then I reached mid twenties and started exploring further my sexually.

I wanted to feel more.

So, I started exploring with different kinds of orgasms, and found energy and power when I had g-spot and cervical orgasms, they left me feeling satisfied, creative, and charged up.

Clitoral orgasms are so easy to have and they are somewhat fun, but the problem is we can get stuck in the cycle of them, and not truly experience the deeper pleasure and levels of surrender that come from the deeper g-spot and cervical orgasms. (I have also found that if I have a clitoral orgasm mid period that I will end up with terrible cramps, but if I have a cervical orgasm it relaxes my body.)

I decided to test a theory out… what if I replaced my coffee with orgasms instead for my afternoon pick-me-up.

To test out my theory, I stopped drinking coffee. As expected my energy would get into a low in the afternoon so instead of reaching for a coffee, I reached for my crystal pleasure wand and started having a daily cervical orgasm instead.

To have cervical orgasms, you really need to feel emotionally open, safe, and totally accepting of yourself, and your body. The cervix is governed by the vagus nerve (this is a cosmic powerful force that connects you to a deeper channel from the cervix to the crown chakra). As you go deeper into your vagina you go deeper within your soul path, spirituality, and awakening. I have found cervical orgasms to be extremely helpful, in energising and relaxing me, and opening me up to so many creative insights.

Not only is my health better, since I stopped have clitoral orgasms and switched to cervical, I feel like my sex drive has increased. Win/win/win.

Struggling with coffee? Try a cervical orgasm instead.

Getting a Happy Ending: Buying Sex As A Girl

Confessions Of A Man Who Has Faked An Orgasm

Here’s Why Sexploration Is So Damn Important For Women