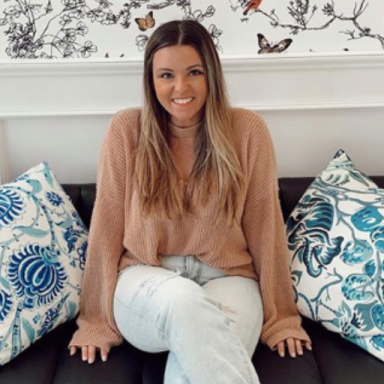 It is a special kind of soul crushing to be almost dating someone. It feels like all of the pieces fit together and you’re putting everything you have into him, but somehow it’s never enough. It’s never enough to make him say yes, to make him call you his, to make him yours. You’re playing the role of his girlfriend, but he’s certainly not your boyfriend. Why does this situation wreak emotional havoc equivalent to that of the demise of the most serious relationship?

I’ve allowed myself to fill the “almost girlfriend” position before, and I’m not sure I’ll ever find myself so emotionally exhausted again. I was broken more times than I thought I could handle, and for a long time, I believed I was truly ruined.

I am so sad for the girl that I was then– the girl who thought that “almost” was enough, the girl who thought that something was better than nothing. That girl made herself so small and weak for someone that didn’t even deserve the opportunity to pick her back up once he had destroyed her. Her world depended on his sporadic hints of affection, but in the end, that wasn’t enough to keep her afloat.

But I can’t hold him responsible for the eradication of my self-worth, right? Because, at the end of the day, we were never really dating.

It started as a friendship that dripped with the kind of sexual chemistry that people write songs about. It didn’t take long for lines to become blurred and clothes to come off. I quickly drank the sweet poison of his words and sank into the empty promise of his touch. What should have ended as one night of impulsive passion erupted into an endless string of days and nights spent together.

To my naive mind, consistent sex and dates meant that he had feelings for me and that there was the potential of a future together on the horizon. But he ripped that facade out of my arms and was not shy about letting me know that we were never really dating.

I heard the words “I will never get serious with you” escape from his lips and it suddenly reaffirmed everything that I felt about myself. I wasn’t pretty enough to be with someone like him; I wasn’t funny enough to make him happy; I wasn’t outgoing enough to keep his attention. The only box that I checked was that I would slip out of my clothes when he looked at me a certain way. I melted into his gaze for months on end as he whispered to me what I wanted to hear. He would fill my deepest voids, but in the blink of an eye, he would retreat, and I was nothing again.

I was falling for someone that I knew would never even attempt to catch me. It was like seeing a train hurtling towards me,and planting my feet firmly on the tracks, willing to be crushed. I welcomed the disappointment and the disrespect because I convinced myself that it was worth having some small part of him to myself. I could feel it in his touch that he was never fully there with me, but I shoved those instincts aside; I was grasping at the minimal efforts he was willing to give. But all he needed to give was minimal effort, right? Because we were never really dating.

I felt so many new things thanks to him. My least favorite was learning what it felt like to be left truly breathless. It happened every time he pursued a different girl when our friend group went out to a bar together. If you’ve ever been in my situation, you know the feeling that I mean. The oxygen is ripped from your lungs and is left dangling in front of you, unable to be brought back in. You choke for air as you forcibly rip your eyes away from his lips touching hers, and suddenly you feel swallowed by the night.

He can’t see you now because his eyes are lost in hers. You take another shot, chug another beer in the hopes that you’ll forget the pulsating weight that is pressing down on your chest. Your thoughts and feelings become numb with the sting of tequila and you manage to stifle the erosion of your sanity. You find a stranger to take his place for the night. In the morning, everything between you two goes back to normal and you never tell him that his one night stand devastated you because you’re not really dating.

I knew I loved someone who would never love me back. I coped by indulging in alcohol. I coped by smoking. I coped by sleeping with other people. I lost so much of myself that I wouldn’t even recognize that version of me if I met her now. It sucked everything out of me, from my emotional capacity to what little self-esteem I had. He handed me everything I needed to feel whole on a silver platter, all the while keeping a firm grasp in order to rip it all away when he changed his mind.

It’s hard to explain how it felt to need someone who wasn’t really mine. I became dependent on someone who was simultaneously making several other girls fall for him the way I did. The worst part of it all was that I knew exactly what was happening, and I convinced myself that if I tried a little harder and held on a little longer, he would finally see in me what I saw in him.

In reality, I gave up who I was for him when he wouldn’t even give me a title. I danced through this disaster for the better part of a year, until one day I decided that I didn’t want to feel like that anymore. I went from thinking that I wasn’t enough, to knowing that I’d had enough. I gathered up what was left of me and walked away from the most toxic “friendship” that I’ve ever known. But hey, we’re still cool because he didn’t really do anything wrong, right? Because we were never really dating.

If you’re anything like the girl I was back then, you are better than this. The thread that you’re dangling by isn’t strong enough to hold on to you forever. One day it will break, and you will break with it. Do yourself a favor, and let him go. He is not yours to keep, and he will never fulfill you in the ways that you need. He will never love you the way you deserve to be loved. This should be easy, it’s not like an actual break up, because you were never really dating.

Just a girl with an obsession for turning her thoughts into stories.