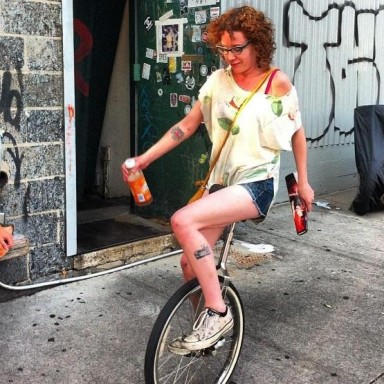 Whenever I see someone light up a cigarette, I am flabbergasted. Not because of the countless studies about how unhealthy smoking is, or the nearly seven million deaths worldwide that are caused by it every year, or those pictures of diseased lungs they stick on foreign packs of cigarettes. It’s not as if I can’t imagine what it’s like to smoke, but if I could quit, surely anyone can.

I grew up in a house filled with cigarette smoke. My mother smoked, my father smoked, all of their friends smoked. The walls of our home were stained yellow and the air was always heavy with fumes. My mother smoked while she was pregnant with me. I was addicted to nicotine before I could walk, and by 14, I had a pack a day habit. The number would fluctuate over the years, both up and down, but it always hovered around the one pack mark.

I tried smoking for the first time at 11, but learned to smoke properly at 13 from another eighth grader. We were sitting on a bench sharing a menthol cigarette after school one day when she looked at me sideways.

“You’re not inhaling,” she barked at me in a thick New York accent.

“What? Yes I am.” I sucked on the end of the cigarette and blew out a puff of smoke. “See?”

“No you aren’t. You’re just putting it in your mouth and blowing it out again. Take a pull.”

As I took a drag and she grabbed my shoulders and shouted, “Ya mothah’s coming!”

I gasped and in the process drew all the smoke that had been sitting in my mouth down my trachea and into my little 13-year-old lungs. After that, smoking was easy and became an integral part of my personality.

In high school, I aligned myself with other smokers and brand-jumped when necessary. I smoked mentholated Newports in stairwells while listening to hip-hop and Marlboro Lights with their dainty white filters to fit in with my oddly preppy best friend. I smoked Camels when I wanted to be one of the guys or accentuate my JNCO jeans, dog collar, and chain wallet. When I was broke, I would pilfer horrible off-brand cigarettes from my mother’s purse. Once in a while, I would dress up in fancy outfits and only smoke the corresponding color of Nat Sherman Fantasias. They tasted terrible but looked beautiful with their colorful cigarette paper and gold filters. Red nails, red shoes, red lips, red hair, red smokes.

As an adult, I was exceptional at smoking. Cigarettes punctuated my whole life. They dictated my schedule and characterized my gestures. I could put emphasis in my stories, exactly where I wanted it, with a well-timed cloud of blue smoke or the flick of a butt. I had cigarettes and backup cigarettes. I rarely had to bum and was always willing to share. I had lighters and matches in every pocket. Smoking was the first thing I did when I woke up and the last thing I did before bed. Smoking meant automatic kinship with other smokers. Smoking meant breaks from work. Smoking meant an excuse to leave. To me, smoking was freedom.

I loved smoking so much that I didn’t quit when my father got throat cancer. I didn’t quit when my mother developed heart disease or COPD. I didn’t quit when my father died. (The doctors said they didn’t think his cancer came from smoking, so I soldiered on.) I decided to quit at 29 after reading an article that said quitting smoking before you’re 30 greatly reduces the risk of smoking-related illnesses. I had tried to quit before with little success, but it was getting harder and harder to make it up the stairs of my boyfriend’s fourth floor walk-up without panting, and I was tired of spending so much money.

Quitting cigarettes is not easy, but it is absolutely worth every second of nicotine withdrawal-induced rage and hunger. Luckily, nicotine only takes about three days to leave the bloodstream. After that, it’s just habit breaking, so here are some tips to help break those habits.

1. Change your routine! I started the process of quitting while visiting family in China. Being in a strange place with a language barrier and severe jet-lag was enough to kickstart a major life change. Not going to travel anytime soon? Try taking a different route to work or waking up at a different time.

2. Start a new hobby! I really dove into knitting when I quit smoking, because on top of suddenly having a lot more money for yarn, I needed to keep my hands busy.

3. Eat all the food. TREAT YOURSELF. You will gain weight. And you will lose it again. Life is a process. Buy some sweat pants and eat a brownie. You’ve earned it.

4. Don’t drink alcohol. If you find you smoke more when you drink, then try abstaining for a few weeks. If you do decide to indulge again, you will find the day after much more pleasant. Everyone talks about weight gain, but no one ever tells you that your hangovers are suddenly much less painful. I was happy to wear leggings for a few months if it meant I didn’t want to die after having too many IPAs during a night out.

5. Be kind to yourself. Don’t sulk if you stumble. Try again tomorrow. You can do it!

6. Think of the money you’ll save! Cigarettes in New York City cost $15 a pack. That’s almost $500 per month. Quit for a year and you can afford a trip to Europe (if anyone is ever allowed to go to Europe again). Even someone from Montana, where cigarettes cost just over $6 a pack, can afford four and a half PlayStation 5s or an older pinball machine. It’s worth it!

If extra money, comfy pants and quieter hangovers don’t sway you, look at the older smokers in your lives. None of them are doing well. As I watch my mother struggle with COPD, emphysema, and a myriad of other health issues, I implore you to do what you need to do to quit smoking. Maybe it’s traveling or getting a new job or picking up a hobby. No matter how cool you look and how well your stories are punctuated, it is not worth how awful you will feel in your golden years. So grab a crochet hook or book a flight. Do whatever is right for you. It’s time.