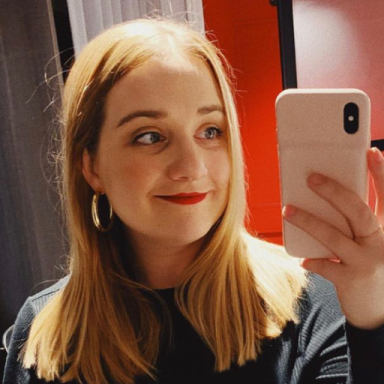 Since we’ve all been isolated to our respective homes, I, like many others, have spent an increasing amount of time in my kitchen. Some are getting aggressively into sourdough. Others are regrowing scallions in their window sills. As for me? I roasted my first chicken. In non-quarantine times, I would have found this task intimidating and “saved it for another day.” But there’s something about being in my house with the rules turned on their head. I’ve become a pretty fearless cook. Eyeballing ingredients. Perfecting my chiffonade. Finally remembering to save that pesky pasta water. (Game changing, by the way.)

Our chicken arrived in the afternoon with another precious grocery delivery. Each one begs remarks like “Did they finally have eggs?” and “OMG, we got Eggo waffles!” It’s always a gamble that we’re thoroughly thankful for as a couple without a car.

The bird was bigger than I expected. The recipes I’d read suggested three to four pounds and this guy was a whopping six. It was also glacially cold, and as I closed my eyes and reached into the cavity to remove the (ew) giblets, it felt like an actual freezer. “Okay, it’s fine, I can do this,” I said, somewhat already regretting this endeavor, tiny kidney in hand.

I diced lemons, garlic, and shallots, diligently blotted with paper towels, furiously sprinkled salt and pepper, and placed it in the fridge to await the end of my work-from-home day. At 5 p.m., I returned to give it a butter massage. I made a bed of carrots, potatoes, and celery in my dutch oven and off it went into the heat for two and a half hours.

The smell was out of this world, so I knew I’d done something right. Now my only challenge was overcoming my fear of Salmonella and not overcooking it “just to be safe.” This is my personal downfall with most chicken recipes. When the timer went off, it was stunning. Brown and crisp, steaming with chicken-y goodness. Plus, the thermometer read 165. Bingo, I had courageously roasted a chicken. Check.

Later that night, I was thinking about this old clip of Julia Child flipping a potato pancake in a frying pan. “You just have to have the courage of your convictions,” she said. Some pretty heavy language for a 1960s kitchen. But it gave me a sinking reminder of how much we let fear hold us back. Fear of failure and fear of rejection, especially as a creative. Suddenly, a drawer full of dead-on-arrival ideas skulked out from the mental space I shoved them in. That collection of essays I never finished. The podcast I never took seriously. A graveyard of projects and ventures I convinced myself weren’t good enough to complete. Bigger things emerge. Like, why didn’t I move to New York and do the whole starving writer thing? Why didn’t I stay up later, writing pieces and pitches? Why did I spend my early twenties at a reception desk waiting for something to happen?

I guess I lacked the courage of my convictions. But that’s okay. We all have our own path. If I didn’t spend those years answering phones, feeling feelings and living life, I’d have nothing to write pieces and pitches about. I can always dust off that collection of essays. I don’t think Podcasts are going anywhere. And as for New York? I’ve learned that a full tummy in California isn’t so bad.

Sarah is a copywriter in Oakland, CA.