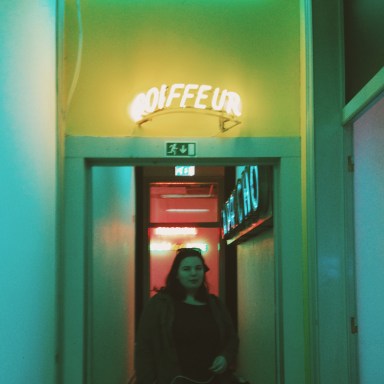 This summer I had a casual friends-with-benefits relationship, which took its toll on me. Most importantly, it made me realize that I’m incapable of not developing feelings for other people.

In this modern age of dating, we expect people to keep it cool, and the real winner is the one who cares less. But if that’s winning, I’d rather lose the game altogether. Because when you like someone, you don’t play mind games and you show them exactly who you are and how you feel. I’ve been afraid of being vulnerable for such a long time, but I don’t regret anything about this. I don’t regret the late nights sneaking into his house, the kinky sex, the long talks, not even the forehead kisses that made me realize I was in too deep.

And this is me not apologizing for it. I refuse to get angry at myself for falling for him and I refuse to get angry at him for not feeling anything, because I understand he’s been through a lot in past relationships and life in general, and I refuse to be bitter and unkind about both his pain and mine. We’re human beings, not robots. We were made to have empathy and care about each other, and if the world cared a little more instead of wanting to win more, people would be much happier.

At the same time, I refuse to pretend to be someone I’m not, so when I felt the rollercoaster-type stomach drop as he kissed my forehead, I knew I had to be honest, because I don’t deserve to be with someone who isn’t head over heels in love with me, and he doesn’t deserve to be asked for more than he is capable of giving.

After the talk, it was like a weight had been lifted from my shoulders. It was uplifting and I was resolute. I knew there was a lesson there for me, and I knew I had committed the bravest act of self-love I’d ever done. For someone who had hated themselves and had self-esteem issues for most of their life, it’s an incredible achievement to not keep up with a situation you know will hurt you long-term just to feel good in the moment and scratch the itch of wanting to be with the person you fell for.

The days after were Hell on Earth, but I had to hurt myself and save the good memories. Because despite it all, he’d been nothing but good to me, and I will cherish the little things of our time together—how smart he was, his enthusiasm about Philosophy, the funny memes we sent each other, how cute he looked in glasses while reading to me, his scent. But I suppose the Six Feet Under quote I so love holds water in this situation: “You can’t take a picture of this—it’s already gone.” We can’t suspend these moments in time forever, like bits of dust floating mid-air, so we have to live them fully and keep them alive in our memories. Moments are ephemeral, and that’s why they’re so special.

To be brutally honest, I really thought we fit well together, and maybe we do in some alternate reality. But he can’t be with me and I understand that fully. So I want him to be happy someday, no matter how long it takes him to achieve it. I believe he can do it, and I believe in personal growth. But for now, I’ll need the space to grieve and get back on track.

Casual flings aren’t bad if both parties are on the same page and agree on the terms of the relationship. But all too often someone falls, and I refuse to believe that caring about other people or getting attached is a weakness.

I almost made something of myself, my mom was almost proud of me.