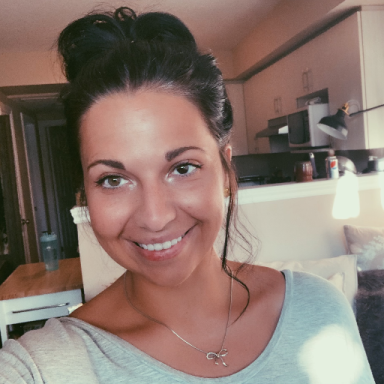 Recently I was at the gym and walked into the women’s changing room. Peppered on the walls were large posters, printed out by a fellow gym-goer: Positive affirmations. Quotes with idyllic imagery and beautiful fonts. I thought to myself, “Cool, that’s a cute idea. Brighten someone’s day.” But for whatever reason, on this day, I was in a foul mood.

There was one quote that stared at me from the back of the bathroom stall that read, “What’s yours will find you.”

I can appreciate cutesy affirmations that are posted on walls, Pinterest, and Instagram feeds, but this quote (and its vagueness) was absurd to me.

My automatic thought was, “How do you know that?” Followed by, “What is actually mine? How do you know if you don’t even know? How would someone else know?”

It went on and on for a bit, but it really got me thinking.

Many people throughout my life have advised me to stick post-it notes on my mirror telling me I’m beautiful to help with the low self-esteem or quotes about getting through the day as I battled with anxiety and depression. And to be quite honest with you, it never worked for me.

Because although I posted these affirmations on my wall and mirrors and repeated them to myself every day, I wasn’t putting the work in. I really didn’t believe in it, and I know that many people say that the affirmations won’t work unless you believe in them, but it’s difficult to do when you need to work on yourself a little more than surface level.

Here are some reasons that the positive affirmation game wasn’t my jam, and why it possibly isn’t yours either.

Positive affirmations have been known to work on a conscious level, but subconsciously your brain is fighting you every step of the way.

For a lot of people, when you read these affirmations to yourself and you don’t really believe them, your brain bombards you with more negative self-talk than you perhaps can handle.

You can literally feel the tension in your body as you fight a mental battle in your head about what to believe. That’s why it is so important to start talking to yourself on a deeper level and work on those deeply ingrained and visceral beliefs that you’ve been repeating to yourself for the past lifetime.

It’s hard to relate to affirmations that you scroll through on your social feeds when they say something like “I am living my best life now, I’m not waiting for tomorrow!” When I read that, I don’t find that relatable at all. To be honest, my brain isn’t even able to compute it. My automatic inclination is to roll my eyes and keep scrolling.

I think it would be better to make your affirmations more relatable to YOU, within the context of where you’ve come from and where you want to go.

For example, instead of the above affirmation, I thought I would much rather prefer, “I’m determined to make this day a good one. I might have ups and downs, but that’s all a part of life. And I am okay with that.”

I think the detachment that many feel toward vague affirmations lead them to quitting while they’re ahead.

3. You’re Only Saying Them And Lack Conviction

Just as stated above, many affirmations that you see online are ambiguous — you don’t know how to relate to them. When you say them, you only say them because you feel like you have to. There is no empathy behind the spoken words, and it leaves you feeling like doing your daily affirmations is just another box on a list of things to do waiting to be ticked off.

4. You’re Lying To Yourself

This one might seem a little harsh, but it’s true.

Many times, body positive accounts preach that you should continuously say, “I love my body. It’s beautiful!” Although I completely agree with it, I think it’s a little counterproductive when you say that on a day when you eat more poorly than you’d like or feel like trash.

In times like that, it’s much better to say, “Okay, I fell off the wagon, but it’s OK. I’m human. I’m still me and I’ll still keep fighting for this body. If I stick to my plan of eating better, I’ll start feeling better mentally and physically. My body is strong and we can get past this slip!”

Be honest with yourself — gentle, but honest. And again, work on the deeper issue.

It’s also been said that “interrogative questioning” is helpful when practicing daily positive affirmations. So instead of saying to yourself, “I am beautiful,” ask yourself WHY you’re beautiful. Dig deep and find those things about yourself that you appreciate and that make you a beautiful person.

5. Affirmations Need To Be In Sync With Our Deepest Selves

The affirmations that we decide to repeat to ourselves on a daily basis should be tailored to you as an individual. I believe that if we write out definitive affirmations for ourselves, it will not only work better, but it’ll be easier for us to assimilate to, since it’s our words that we are repeating back to ourselves.

So you need to dig deep. You need to find out what it is that YOU ultimately want out of this life.

Anything is attainable if you put in the work — 110% nose-to-the-grindstone hard work will get you to your goals.

They say not to make lofty goals when trying to reach something that you want out of life, so why would you repeat lofty affirmations to yourself?

It isn’t that affirmations don’t work, it’s just that they might not work for you in this particular circumstance because it isn’t coming from your authentic self. If you repeat these personal declarations to yourself on a daily basis that comes from your heart, then you will have an easier time believing them and will poke holes through the negative facade.

So start letting a little light in.

i have two different coloured eyes