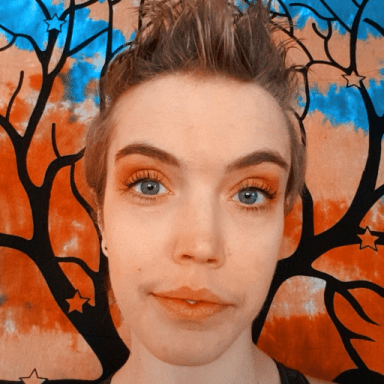 “You look so…” he trailed off as he struggled to find the right word to describe what he wanted to say. “So… different?” I could tell he wanted to say weird. Strange. Bizarre. Bad. He came up with “different.”

I had just come downstairs, ready for my first day of high school after spending a good 45 minutes sculpting, painting, repainting, lining, and coloring my face into the picture-perfect palette I believed at that time was the general expectation of my appearance. The bare minimum. A thin layer of concealer, followed by an overall coverage with liquid and or powder foundation, depending on how tarnished my original skin was that particular morning. A dusting of bronzer and some blush to highlight the cheekbones, of course. Enough so you begin to resemble a supermodel. Basecoat on the eyelids, line the crease, fill in the brow line, extend the color from edge to edge. Line. Thickly. Mascara. Another layer. Another layer. Also the bottom lashes, so you can see your eyelashes in the edge of your field of vision, making it harder to see properly. Line the lips, fill them in with gloss or stick until it’s impossible to eat or drink. Blot. Check teeth for runaways. Finish with setting spray so it doesn’t run when you inevitably begin sweating. A quick 45-minute routine. The bare minimum. A booty-enhancing, chest-highlighting outfit, accented with the most uncomfortable pair of shoes you can find so it all comes together. The bare minimum.

Today’s eyeshadow color of choice was MAC’s Vivid Hunter Green with pearl—a subtle choice for covering my entire eyelid, corner to corner and top to bottom. I traipsed past my stupid brother with the dumb smirk on his face, ignoring his opinion completely. I tried not to care what he thought, of course, but being as he was my only brother his opinion did in fact matter a lot to me. The word different swam around in my head and I avoided making eye contact with myself in the mirror that morning. I had spent so long “making myself beautiful,” and I was devastated that someone I thought loved me so much couldn’t see me for how beautiful I was, how much effort I had put in.

It took me a good three entire years of trying, failing, and trying again to get used to not wearing makeup. There was no other way to say it: I was conditioned to believe that I was only beautiful, only worth talking to, only worth dating or hiring, if I was painted and created. It was a devastatingly difficult norm to override and unlearn. It was woven into the very fabric of my being. I had a long history with wearing makeup and changing my mind about its necessity seemed like an insurmountable task.

Can we just take a step back for a second and try to suss out a root cause of this behavior? For decades and generations now, women have been brainwashed by corporations into believing that they need a certain type of hair or makeup product in order to be worthy of existence. It is the most insidious marketing scheme in history, if you ask me—the same industry used an ad campaign to start selling razors to women, convincing them that their body hair was undesirable, especially to their male counterparts, which as we all know is the sole purpose of existence for a woman (to attract and impress men).

NOT. We, as womxn, have so much more to offer than our dressed-up, painted-up selves to be a servant to the man who could do our job better because he’s not impeded by not being able to see, eat, or walk. It wasn’t until years later, when I was well into my intellectual studies and didn’t have a second of spare time to do 45 minutes of makeup in the morning, that I began to realize the most profound and simple truth of my life: I am naturally beautiful.

Now when I look in the mirror without makeup on, I see the real me. My eyes look bright and familiar, wide and natural. My skin has a million different tones to it, most of them paler than the next, and it is a stunning complexion. My lips are a perfect shade of pink and well defined without the aid of a pencil and brush. Unconditioning is really fucking hard, and it took me a long time. Don’t get me wrong, I still love getting dressed up and putting a good face on, and I’m grateful for the tools I’ve gained over the years of competitive dancing to be able to do it well, but I no longer rely on these tools for my self-esteem and self-worth. I no longer look for myself in a tube of mascara or a palette of eye shadows. These things can enhance me, but they will not define me. Not again.

I would never tell him to his face, but my brother was right that first day in high school when I had way too much makeup on. I did look different, and not in a good way. I didn’t look like myself anymore. But this was what people wanted from me—people whose sole purpose for existence was to extract wealth from the public by any means necessary. I listened to the voices of these people at that time, because I watched cable TV with ads and I read magazines with ads and I went to see movies with ads and and and.

And I was a teenage girl. A mandatory part of being a teenage girl is to feel bad about yourself for minimum one year and to try to fill this void by changing your hair, doing your makeup, and buying clothes. I don’t know a single adult woman who didn’t go through this identity crisis sometime between 13 and 20, perhaps multiple times. It was a rite of passage.

I came out the other side and I learned some important lessons from the journey. It took a lot of failing to finally stand strong outside of my house with my naked face on. It was purely terrifying to break that norm. I’ll never forget how good I felt about myself when I went out to a club in university, wet hair up in a bun, glasses on, without makeup, in T-shirt and jeans, and got hit on multiple times, whereas my roommates who had done the mandatory bare minimum plus extra and were dressed up all nice just ended up dancing with each other all night. We were all equally beautiful. That didn’t matter, though, because the confidence that came with me going out au naturale was sexier than any layer of makeup.

If you love wearing makeup, own it. Be beautiful however it works for you. Just ask yourself who you’re doing it for. Try one day seeing yourself without any paint or corrections and notice how it feels. Practice loving yourself when you are in your most natural state. Use your makeup tools to enhance the features of the already perfectly crafted vessel that is your body.

Always been obsessed with words