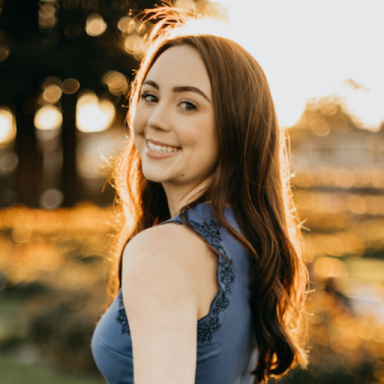 It’s only been a few weeks since my 23rd birthday, and I already know this is going to be my year. For the first time ever, I love myself.

Last year, when I graduated college and sprung into the adult world, I felt shocked that I was in control. Before, I felt like my life belonged to someone else. As a child, I belonged to my parents. When I sat in class, I was property of the school.

I became a people pleaser because I didn’t take ownership of my life. I didn’t think I could control my future. Although I was great at making other people happy, I never showed myself any love or respect.

And then, boom—I graduated. They sent me off with a white sheet of paper that had my name and degree on it. I had no idea what to do. As an adult and college graduate, I had no one left to impress. Not my family. Not my professors. The only person left to impress was the same person I neglected for 20-something years: myself.

In the following months, I was lost. I found comfort in vodka shots and small talk with strangers. Without the approval of others, I felt like my identity was extinct.

Dreams kept me holding on. I only had abstract goals with no real plan in place to achieve them, but those slivers of hope got me out of bed every day. I realized that, even though the future I wanted seemed far away, the only way to go was up.

So, I got to work. I accepted the things that were out of my control, and I made a list of things I wanted to change. It was a long list, but the improvements had one thing in common—they were all out of self-love. In a dark place where I could barely see my surroundings, self-love was the light that guided me to happiness.

Here are five ways I learned to love myself.

1. I changed my mindset.

No longer allowing myself to be crippled by self-doubt, I developed a “can-do” attitude. To shift my mindset, I chose to celebrate my positive qualities instead of criticizing myself every five seconds. Even when it got hard, I forced myself to think happy thoughts—I realized that the world around me would appear more beautiful if I viewed it through a positive lens.

2. I saw every day as a new opportunity.

Mornings became my friends. I quit dreading them and instead I viewed them as opportunities to improve and succeed. To me, every morning was another beginning. My 5 a.m. alarm didn’t seem so bad anymore. I got excited by the potential of each new day.

3. I took control of my destiny.

Instead of just letting things happen to me, I took responsibility for the circumstances of my life. I realized that my actions would directly impact my future. So I started exercising regularly. I cooked more often and ate less takeout. I started a blog, launched my freelance writing career, and made professional moves that scared me. Comfort zones became things of the past—my life was racing ahead at full speed.

4. I recognized my worth.

In high school and college, I undervalued my skills. I only felt confident in my abilities when other people praised my work. After I graduated, I realized I had to build up my self-confidence because my own opinion of myself was the one that really mattered. I slowly began to recognize my worth as I improved my mental wellness. I told myself I was beautiful. I told myself I was smart. I told myself I had potential. After repeating those statements hundreds of times, I finally started to believe them.

5. I decided to be myself in a world that put so much pressure on me to be somebody else.

When I was growing up, I thought I had to be this “cookie cutter” version of the perfect child. I didn’t want to break the rules, and I didn’t see the value in my uniqueness. As an adult, I’ve realized that individuality is everything. I won’t succeed in life by doing what everyone else is doing. I have to go above and beyond, forge my own path, and live on my terms. To me, there’s no point in trying to fit a mold. I am my perfectly imperfect self, and that is enough.

I spent most of my life doubting myself and believing I couldn’t control my fate. Now I know that my quality of life depends on my own actions and mindset. Even if “nobody likes you when you’re 23,” it doesn’t matter—because today, I love myself.

I am a freelance writer and lifestyle blogger from sunny Florida!