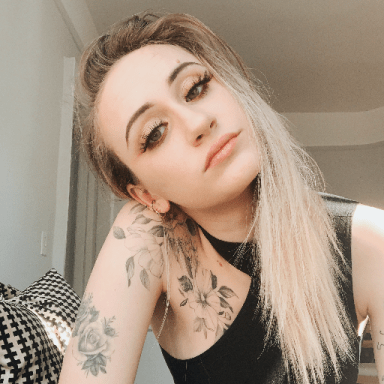 If you’re at all familiar with the tattoo scene—and honestly, even if you’re not—you’ve probably heard the name JonBoy before. He’s given Bella Hadid her permanent wings, Justin Bieber both of his face tattoos, and Kendall Jenner her little white dot. Jon is famous not only for tattooing celebrities and supermodels, but more broadly for encouraging the rise of tiny, fine-line tattoos—acceptable and permanent accessories. His coworkers at the time were equally as talented, together garnering a constant stream of customers at the sunny, West Village shop.

And while all this was happening at West 4th Tattoo, I was always in the background, responding to emails and having clients sign consent forms.

I was a receptionist at one of New York’s most famous tattoo shops for a brief but blissful year of college. Every night was exhausting and exciting as I learned about the world of tattooing, something I had been fascinated by since I was young. A lot has changed since then, but the lessons I received—and the ink—have stuck with me.

I don’t regret any of my tattoos, which might be a surprising statement from someone who has over 30. Each of them flows with my body, like they’re supposed to be part of me. But sometimes I regret memorializing a moment in my life that once seemed glimmering but now doesn’t carry such monumental importance. That point of my life passed, as it should, and yet I still carry its weight around on my body. Did Lorde’s album Melodrama change my life and shape my entire Summer 2017? Sure. Do I wish I’d waited more than 12 hours to immortalize that album on my body? Honestly, yes. That summer was harder than I anticipated it would be, those songs heavier.

Admittedly, not everyone suffers from the same impulsiveness I do. But from my time at the shop, I know that many people do share that impulse to rush permanence. I saw people get tattoos days after their pet died or a week after coming back from a trip—or even while on a trip. It’s not a bad thing, just an observation. I think in the wake of feeling something deeply, we immediately search for a way to keep that feeling with us, to ensure we don’t forget.

That being said, I think there’s some kind of pressure for tattoos to mean something—people at parties inevitably turn my arms over, asking, “And what does this one mean? This one?”

I have answers for some of them. But sometimes you just like the way a bunch of roses look crawling up your wrist. Sometimes you think a set of vampire fangs looks sick. Sometimes you just love Scooby Doo so much you want The Mystery Machine permanently on your ankle. The meaning of these tattoos ends at aesthetic pleasure—you just like it. Someone at the shop got an avocado because avocados are their favorite food. Someone got an outline of a pig because they thought it was really cute. So many people got flowers because they are dainty and beautiful. Their post-tattoo smiles were just as big as the people who got tattoos with a “story.” Your joy is still meaningful, and you don’t owe anyone an explanation beyond that.

3. Tattoos do not indicate character.

This is probably the lesson I hold closest to my heart. Growing up, most of us are taught that tattoos are “bad” in some way, that they are meant for troublemakers. But at the shop, I saw people from all walks of life getting tattooed, and surely not all of them are bad people, right? Also, every single tattoo artist I worked with is generous beyond belief, going above and beyond their roles as an artist. They really care about making their clients happy and respect the power they hold in altering their bodies forever. They welcome every person into the shop, listen to their story, and never judge people for their choices or their appearance—for they know, better than anyone, that first impressions are often only skin-deep.

Preoccupied with stories and skincare.