We all have outcomes we want to achieve.

Whether we want to commit to a diet to lose 14 pounds, exercise to feel more productive or join a Meetup group to meet new people, changing our habits will help us get what we want.

Fortunately, transforming our habits has never been easier. With books like Charles Duhigg’s The Power of Habit: Why You Do What You Do and How to Change it, and research by Professor B.J. Fogg at the Stanford Persuasion Lab, we can now utilise frameworks like The Habit Loop, to help us change when change is hard. (See Figure 1) 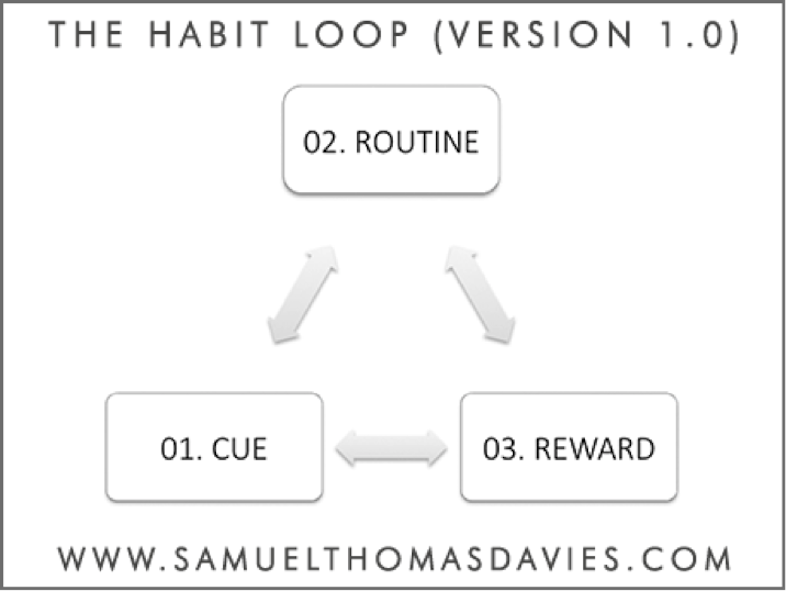 If you read my previous post, How to Break a Bad Habit (and Replace It With a Better One), you will remember at the core of every habit is a neurological loop called The Habit Loop. This consists of a cue, (what reminds you to do the behaviour), a routine (a mental, physical or emotional behaviour) and a reward (the reason you do the behaviour).

However, in order to automatise behaviours in the long-term, a finite reward – like drinking a post-workout protein bar – may not be enough.

The Problem with Finite Rewards

Feedback loops are everywhere; we indulge in alcohol, chocolate chip cookies and pizza because we know, from previous positive feedback, we experience pleasure when we do.

The behaviour, in other words, is rewarding.

However, when feedback loops become predictable, they don’t motivate us. Companies understand this all too well; hundreds of millions of dollars are invested in marketing annually to prevent this from happening.

In the book, Hooked: How to Build Habit Forming Products, Nir Eyal explains:

How do you counteract people losing interest? You introduce variety. New ingredients. New flavours. New recipes. And what was once a predictable reward becomes a variable reward.

We become hooked and the behaviour becomes a habit.

Companies have realised, fundamentally, if you want to automatise a behaviour in the long-term, you have to introduce variable rewards; ones that not only satisfy your cravings, but leaves you wanting to reengage with the behaviours in the future.

We can apply this same fundament to building new habits (see Figure 2.0).

Before we learn how we can do this, let’s look at how variable rewards work, and how one company successfully built them into their Habit Loop.

When we’re expecting a reward, dopamine – an excitatory neurotransmitter – is released at a higher level.

And when a variable reward is introduced, the effect is multiplied. We want and need immediate gratification, and our desire blinds us to any logic or reason that may otherwise dissuade us in that moment.

In 2001, Research published in The Journal of Neuroscience discovered the nucleus accumbens – the special area of the brain that is the source of our cravings – isn’t activated when the reward is received, but rather in anticipation of it. [2]

What draws us to act is not the sensation we receive from the reward itself, but the need to alleviate the craving for that reward.

Facebook learned how to influence human behaviour by using the updated Habit Loop. They knew, by introducing variable rewards, users would return to their website again and again.

Take John for example. He’s a typical 19-year-old college freshman with Facebook on his iPhone.

When he receives a notification via email or mobile popup (cue), it triggers him to check his account (routine) and he’s rewarded for his behaviour with a friend request, private message or a number of other variable benefits he receives from checking (reward).

Facebook has hooked John and the rest of us in a number of ways. It’s free, it connects us to others and it’s entertaining, but most significantly, all their rewards create anticipation.

You never know what you’ll receive with each login, and this curiosity pulls us back again and again.

The question is: what if we did this with our habits?

How We Can Use This

To commit to the habits that will help us achieve our goals this year, we need to introduce variable rewards for doing them.

Ask yourself: “How many ways can I reward myself for doing my new behaviour?

If you want to run every morning before commuting to work, you might – counter-intuitively – reward your efforts with a block of chocolate. This extrinsic reward, will, like all rewards, become predictable. But if you replaced it with an intrinsic reward – one that was variable, like congratulating yourself verbally: “I’m really proud I ran this morning” – you won’t tire of it. The anticipation for rewarding yourself, verbally, hooks you.

Here are a few more examples:

One question I’m often asked is: “How regularly should you ‘update’ the reward?” That depends on both the habit and the individual.

If you feel your motivation to do the habit begins to wane, it’s because of one of three reasons:

Meditating after turning on the kettle is an effective cue; you can do it and at no extra cost, but upon waking up when you’re groggy? Not so much.

Do you look forward to your reward? If not, you’re not craving it. Update it.

Habit formation isn’t hard: commitment is. But by introducing variable rewards, we can become hooked to our habits. Remember what you want this year. This could be the year you do it.

Read this: How To Build A New Habit In 3 Easy Steps (And Make It Stick)
Culture & Art Habits Health & Wellness The Digital Age

The Secret To A Healthy Heart Lies In A Healthy Marriage