Learning new behaviours is undoubtedly hard. You have obstacles to overcome, resistance to contend with and an environment to redesign.

But behaviour change is a lot harder when you make mistakes: ones that are common, but often overlooked or disregarded because of their simplicity.

The problem is, we have a natural tendency to assume blame when our new habits don’t stick. We assume we are the problem, when the reality is it was the strategy we were using to begin with.

The following are the top 10 mistakes in behaviour change as researched by Professor B.J. Fogg. These are mistakes that, when avoided, can help you accelerate the formation of new habits and more importantly, make them stick. [1]

Like most people, I used to rely on willpower to change my behaviours. I would “will” myself to eat fruit and vegetables, exercise and socialise.

But the truth is willpower is a limited mental resource and the more you use it, the more it impairs your self-control. This is known as decision fatigue or ego depletion.

SOLUTION: Pretend willpower isn’t even an option. Instead of relying on willpower to learn new behaviours, form what Fogg calls “tiny habits” instead.

FURTHER READING: Willpower: How to Overcome Decision Fatigue and Commit to Your Habits.

In a world where we’re led to believe personal achievement should only be celebrated when it’s large and with visible results, it’s hard to start small.

But the secret to long-term change, is to focus on baby steps (to begin with) and do things you can sustain – like improving 1 percent daily. Don’t believe me? See Figure 1. 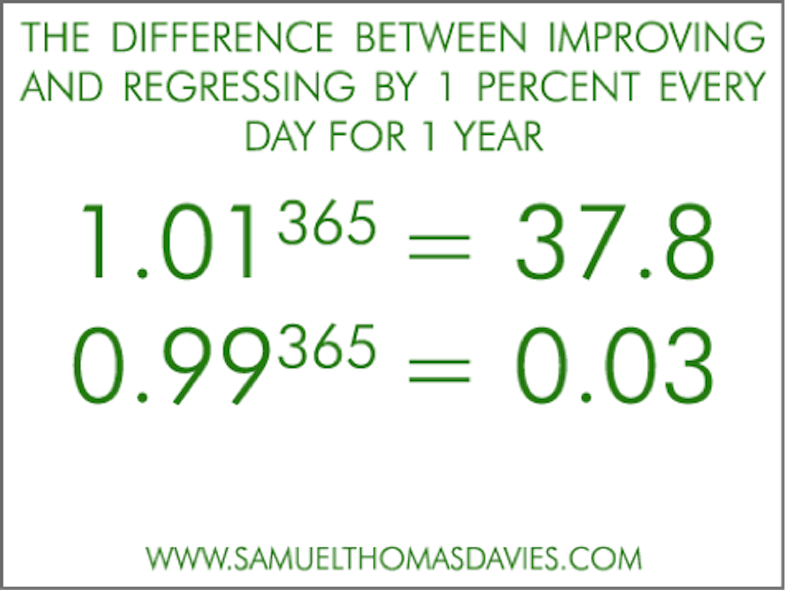 SOLUTION: Seek, what Fogg calls, “tiny successes”, one after another. Flossed one tooth? You deserve a pat on the back. Said no to a dessert? Go wild on cheat day. Remember: Celebrate – and do so often.

FURTHER READING: The Power of Small Wins: What the LGBT Community Can Teach Us about Widespread Change.

It’s amazing how small changes in context can greatly influence our behaviours. Taking the batteries out of your television remote control, deleting social media apps on your mobile phone and even serving meal portions on small plates, can all affect your behaviour – and for the better.

FURTHER READING: Choice Architecture: How to Commit to Behaviour Change When You Lack Willpower.

Mistake #4: Trying to Stop Old Behaviours Instead of Creating New Ones

Going cold turkey to break bad habits is a popular, albeit difficult strategy to maintain; cravings aren’t satisfied and as a result, willpower failures become inevitable.

In his book One Small Step Can Change Your Life: The Kaizen Way, Dr. Robert Maurer recounts how he helped his patient, Rachel, kick her smoking habit by asking her to leave a voicemail on his phone whenever she felt the urge to smoke.

The result? She realised her reason for smoking in the first place and overcame her addiction. [2]

SOLUTION: Focus on taking action, rather than avoiding the problem entirely. It’s almost impossible to stop a negative behaviour, so replace it with a positive one instead.

FURTHER READING: How to Break a Bad Habit (and Replace It with a Better One).

Your motivation – like your emotional state – ebbs and flows; it’s unpredictable and when you do need to rely on it, you’ll often be disappointed.

SOLUTION: You don’t need motivation to change, but what you do need are easier behaviours, ones that are impossible to resist. Eat one portion of fruit. Floss one tooth. Run to the next lamppost. In other words, make it, as Leo Babauta writes: “So easy, you can’t say no”. [3]

FURTHER READING: How to Build a New Habit in 3 Easy Steps (and Make It Stick).

Mistake #6: Understanding the Power of Triggers

At the core of every habit is the same neurological loop. There’s a cue, a routine and a reward. The cue is the trigger that tells your brain to go into automatic mode and which habit to use.

SOLUTION: No behaviour happens without a cue, so to break bad habits, identify your cues (there’s often more than one) and to form new ones that stick, choose a cue like an immediately preceding action. An existing habit, like waking up, is perfect. [4]

Knowledge is not power, but knowledge and application is. An idea is only as good as its execution, so be sure to apply one new idea you learn, be it from this article or another.

SOLUTION: Don’t be rational about change, get emotional; associate massive pain to not changing and pleasure to changing.

You attend a seminar, feel inspired and decide to “start a business”, “lose weight” or “earn more money”. But these are abstract goals: there’s no specific call to action – so give yourself one.

SOLUTION: Fogg explains “Abstract is: ‘Get in shape’. Concrete is: ‘Go to a one hour circuit’s class once a week’”. Turn your new behaviours into actionable steps that are easy to follow.

Mistake #9: Seeking to Change a Behaviour Forever, Not For a Short Time

There’s a reason Alcoholics Anonymous’ slogan is, “One day at a time”: change is hard. If we’re not dwelling on the past, we’re thinking about the future, so focus on the present and what you can do, today. First things first. One step in front of the other.

Track one day to begin with, then a week, then a month and so on. You have one job: don’t break the chain.

It’s easier to argue you can’t change because you “lack willpower” (or any other excuse) than it is to do something. But when you have a framework for change – like the habit loop – you have no excuses.

SOLUTION: Behaviour change isn’t so difficult – once you’re using the right strategies in place. Decide what you want to change and take one new action, now. Identify a cue. Celebrate a success. Replace a routine. Just do something.

Realising and avoiding these mistakes has transformed how I change my habits. I’m indebted to the solutions because they have changed my life – I hope they change yours too.

B.J. Fogg and Stanford University Persuasion Lab. Thank you for your research. I’ve learnt so much from you.

How These Simple Life Changes Completely Transformed My Physical Health

How To Prevent Self-Sabotaging Behaviors