Are you a master of a skill?

Perhaps you’re fluent in a language. A Grade 8 pianist. Or a master craftsman in carpentry.

If you are, it’s not necessarily a result of your income, personal circumstances, upbringing or any other variable. It’s a result of something a lot more powerful.

Something you have complete control over.

It’s a result of habit.

But there is a price to pay: It requires a lot of hard work and years of practice.

A lot of us want to change our habits for the better; we want to eat healthy, exercise regularly and start writing, to name a few.

And it’s not that we’re unmotivated; we’re not: It’s that we often don’t know where to start. We don’t know how to change.

But, it doesn’t have to be hard, once you know how. Once you have a framework for change.

This article is that how.

How a Habit Works

In his New York Times best-selling book The Power of Habit: Why We Do What We Do and How to Change, Charles Duhigg explains at the core of every habit is the same neurological loop, called The Habit Loop. [1] 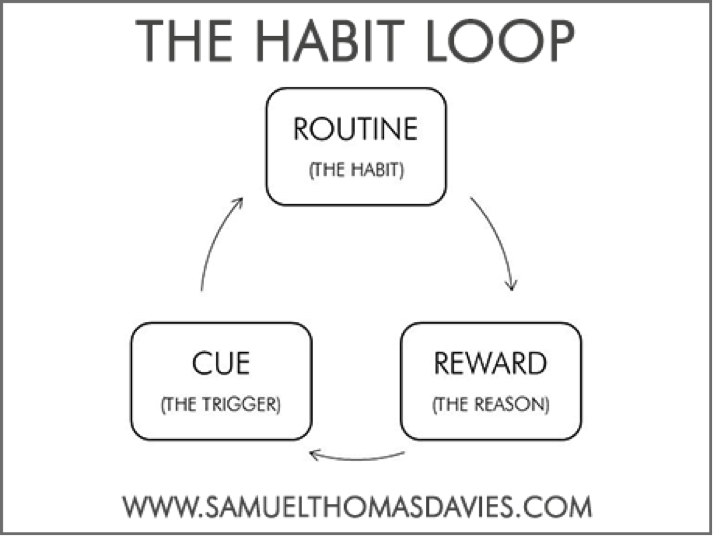 The cue is the trigger that tells your brain to go into automatic mode and which habit to use. The routine is the behaviour itself. This can be an emotional, mental or physical behaviour. And the reward is (1) the reason you’re motivated to do the behaviour and (2) a way your brain can encode the behaviour in your neurology – if it’s a repeated behaviour.

Once the brain begins to crave the reward, the habit becomes automatic.

Once you understand how habits work, you can begin to strategise how to build new ones.

How to Build a New Habit

All habits are different and some are easier to form than others. It’s easier to drink a glass of water upon waking up, than it is to go running every morning.

Contrary to popular belief, it doesn’t take 21 days to build a new habit. In fact, there’s no solid evidence for this number at all. It’s actually closer to 66 days. [2]

Checking your iPhone when you receive a notification, accepting a chocolate that’s offered to you and turning on the television when you sit down, are all examples of habits we’ve picked up and conditioned, easily, because of their immediate payoffs.

However, when exercising, eating five portions of fruit and vegetables a day, and flossing daily are new behaviours, they have no immediate reward and are harder to commit to.

Therefore, the following three step model is for habits that are hard to create because their rewards are delayed. [3]

The first step is to focus on, what Stanford University researcher B.J. Fogg calls “tiny habits”. These are the smallest behaviours that matter (or SBTM for short). A tiny habit has to be:

If you don’t make your behaviour tiny to begin with, you will almost certainly fail to create a new daily habit.

For example, if you start out running one hour each day, you won’t create a habit of exercise.

But if you commit to putting on your running shoes, you are, as Leo Babauta would comment, “making it so easy, you can’t say no”. [4]

Later – perhaps months later – you can expand on your habit. But when you do, the larger behaviour will be easier. Why? Because the more you do something, the easier it becomes.

Consider all of your existing habits. They are all easy to do because you’ve practiced them for thousands of hours. Soon, your new habit will be no different.

Step 2. Do Your Tiny Habit Immediately after an Existing Behaviour

The next step is to identify an existing habit. This is going to be the cue that triggers your new behaviour.

Ask yourself: “What behaviour do I always do, regardless of how I feel?”

This can include waking up, showering, going to the bathroom and brushing your teeth, to name a few.

You need to know what your tiny behaviour comes “after”. For example: “After I brush my teeth, I’m going to floss one tooth”.

The final step is to celebrate doing your new habit. You may find this approach weird, but it works, because the ability to self-reinforce good behaviour is the key to rapid habit formation.

You can speed up the process of habit formation by experiencing positive emotions about your tiny habit the moment you remember to do your tiny habit sequence and after you do it.

When I build a new habit, I physically rehearse the sequence a few times, each time declaring victory. This gets your brain wired to remember it.

For example, my newest tiny habit is doing two press-ups after I’ve meditated. I sit down to meditate (cue), then I get in the position to do a push-up (routine) and finally, I celebrate my tiny success by patting myself on the back (reward). I repeat this sequence a few times until I’ve got it down pat.

There are multiple ways you can celebrate tiny successes. You can do a physical movement like a thumbs up. Say a word or phrase like “Awesome!” internally or out loud. Or move your face to look happy like smiling in the mirror. Whatever you do, make it personal to you.

Every day, just do your tiny behaviour immediately after the existing behaviour you’ve chosen and remember to celebrate. Here, your brain and body is learning a sequence. “After I X, I do Y and I feel Z”. For example, “After I meditate, I do two push-ups and I feel awesome!”

Note, that in this step, you are learning to put a new behaviour into your routine. You are not learning the behaviour itself.

Let me explain. Suppose you want to floss daily. You already know how to do it. But what you don’t know is how to do it regularly. You haven’t mastered putting flossing into your routine as an automatic action – yet. But tiny habits will help you do that.

The more you train this new routine, the more the new behaviour will automatise and become the new normal.

Learn how to implement tiny habits in your daily routine and soon, others will marvel at the apparent ease you became a master yourself – a master of habit.

How To Have More Energy In 3 Simple Steps

3 Helpful Tools For Building A Healthy Sense Of Self

How To Develop Good Habits That Actually Last In 2020

4 Ways Traveling Will Drastically Improve Your Quality Of Life