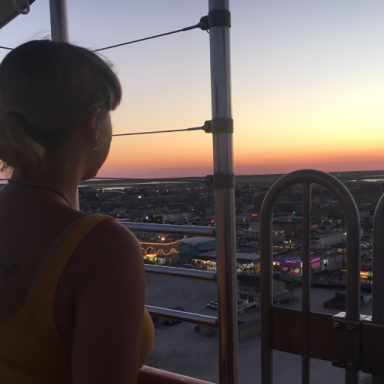 Last week I was telling someone about my spiritual journey and I started off by saying, “Growing up, I was forced to believe in Catholicism.” I repeated the words “forced to believe” in my head, over and over, and recognized the contradiction in that phrase alone. It may be hard to admit, but many people do not actually believe in anything; we are told what to “believe” in, so it is no longer a belief. It is mind control.

I had a late start forming my beliefs, as I was forced to believe in Catholicism. Sure, there were aspects I liked. I thought it was cool that there was someone looking out for me. I liked how it emphasized being a good person. But when I was around ten years old, I started to notice things I did not truly believe in. Having that internal struggle at a young age hindered my growth as a person. I thought it was weird that I had to tell a complete stranger everything I did wrong in order to be forgiven. I saw people mindlessly reciting prayers that made no sense to me, and I questioned why I had to remember specific words over and over again. I always wondered if priests were lonely, and it made me confused why they could not be married and have a relationship with God. Every Sunday I dreaded going to church. I felt bored, almost like I was wasting time. I wondered why I could not just reflect on my beliefs on my own time throughout the week. At 10 years old I started giving my parents resistance about going to church.

I do not blame my parents for forcing me to “believe” in Catholicism because it is how they grew up. That’s how religion is able to continue. They tell you what to believe in, make you feel bad if you question it, and then eventually you cave. Church felt like a guilt trip to me—I did not want to go, but if I didn’t, I would go to Hell. And because I grew up learning that Hell was a fact, not a belief, I felt scared into believing in Catholicism. So I went to church and recited monotone prayers. I remember putting money in a basket and wondering what that money was for or why we had to give a church money. I went to CCD classes, where it was the same lessons over and over again: God loves you, Jesus saved you, and this is all a fact. And even if I doubted everything, there was a sliver of belief I held that said, “What if Heaven and Hell are real?” And that sliver of belief was enough to keep me in the religion. It was a scare tactic.

As I grew older and broke away from religion, I became an atheist. I could not see the benefits of religion when I was younger, so the solution for me was to do the complete opposite. I thought that after we died, that was it. But it left an empty feeling inside. Atheism is based on facts so it is easy to digest, but it did not explain parts of my life that I wanted answers to.

I was an atheist until I hit a deer with my car when I was 20 years old. I know that sounds weird, but it was too coincidental. The day before I hit the deer, I cried about how my car was going to break down soon. It was worthless, the mileage was hitting 200,000, and my commute to college was over an hour each day. I had no money to get a new car and was working a minimum wage job while going to school full time. I left for work the next day at 3:30 a.m. (I worked in a bakery) and took my usual route on the highway going 65 mph. I thought it was going to be like every other day, but out of nowhere a 6-point buck jumped in front of my car, giving me no time to swerve. I hit the deer with the front of my car at 65 mph. My hood was smashed, the windshield cracked on the driver’s side, and the rearview mirror shot to the back of the car. Part of the bumper broke away and the side view mirror fell off. The craziest part of all of this was how I continued to drive to work out of shock. My car was smoking for the whole five miles, but I made it. When I got there, my coworker called the police, telling them what happened. They filled out an accident report, but they were surprised at how I managed to still drive to work. I explained it was the shock of hitting a deer.

Everyone kept telling me how lucky I was. I was not hurt, not even the day after. My car did not hit anything other than the deer, which was good because my insurance did not cover collision. My car was a Saturn, which are known for their low-lying hoods, and that alone saved my life by guiding the deer to slide over the roof rather than through the windshield. The deer was preserved on the side of the road due to the cold winter weather, and someone I knew picked it up for venison. My dad came to get my car and was able to drive it back to my parents’ house six miles away, where it died in the driveway. The insurance company gave me $3,000 for the car, even though it was worth next to nothing. My family knew of someone selling their car for that much, so I got a new car using the insurance money. When I read the accident report, I learned that hitting a deer is considered a complete accident and called “an act of God.” It gave me chills.

I did not randomly start believing in a god again, but I did question atheism. This whole situation was too coincidental. I thought about the possibility of karma and things happening for a reason. I thought about how being a good person could give me a positive life. I started to “test” it by doing random acts of kindness without needing a reward or recognition in return. I stopped lying, talking negatively about people, and doing things simply for my own benefit. I acquired empathy and control over my emotions. I learned that being a good person does give you good karma.

I felt good about myself and who I was as a person. I did not have to hide anything, as I was transparent with everyone around me. I treated people how I wanted to be treated. Positivity breeds positivity. But I still wanted answers to how emotions work.

Developing empathy gave me intense intuition and sensitivity to others’ emotions. If someone felt anxious, I felt it too. If someone was happy, I felt it too. I thought about a mother’s intuition, how people can fall so deeply in love with others, and how you can sense “bad vibes” when someone that is negative approaches you. These emotions felt like my energy was connecting with the energy of others’, regardless of distance. Loving someone that went far away made me feel like there was tension pulling my energy across the world to their body. I knew there were three dimensions—length, width, and height. I knew the fourth dimension was time, and time can be manipulated in different parts of the universe. But I felt like there was another dimension of just emotions that explained why people feel the way they do.

Today I believe that there is an overlying dimension that holds our energy and connects it with the rest of the world. That dimension is my “god,” but it is not a single person somewhere in the sky. That dimension reacts when I do, and my negative actions can cause a negative reaction in the universe. Everything is about balance and karma. I believe that when we die, our bodies may be gone, but our energy is freed into the universe, where it is recycled and reconnected. I want to make sure I have positive energy so I do not contribute to the negativity in the world and my energy is associated with the positive parts even after I die.

I came to these beliefs based on my own personal experiences. If I was never forced to believe in something else, I would have developed these beliefs earlier in my life, and it would have benefited me a lot more when I was younger. I always say that when I have kids I will let them be free to develop their own beliefs without outside influence, and because of that I do not think they will be in an organized religion. Organized religions can be beneficial, but I would never come up with the story of Jesus and God and Heaven and Hell organically without someone telling me it is true. If that is the case, then how can it be categorized as a belief? If you can organically come up with your beliefs based on your own life experiences, without any outside influence, then it is truly a belief. If not, then it is a form of mind control.