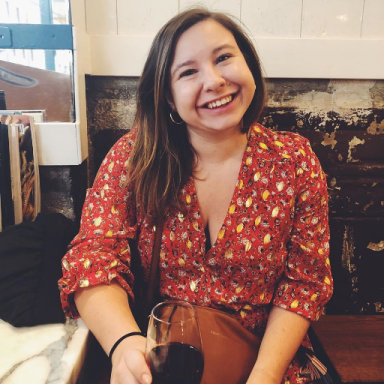 She was thirsty. It was the middle of a 90 degree summer night and a steady sleep seemed unlikely. She turned over in bed to reach for a glass of water and suddenly everything around her was wet.

“Goddamnit!” she exclaimed as she knocked over the water glass, dampening the bed and the entire nightstand. She attempted to wipe the sleep from her eyes, but somehow slumber prevailed. The damp sheets felt nice against her skin, like placing a wet towel on her forehead. A welcome respite from the Midwest humidity.

A siren blared in the distance; the fan rattled from across the room. She could hear the ticking hand on the vintage cuckoo clock. The symphony of city sounds and the moist top sheet pulled her quickly back to sleep. Her eyes were so heavy that instead of getting up to refill her water glass, she lapped up water from the puddle on her nightstand with her tongue.

These days she felt almost feral.

It started with her clothes. She stopped wearing clothes that were traditionally seen as stylish and opted for garments that increased her comfort level. The zippers and buttons seen on the streets of the city were long gone, and in came elastic waistbands and terry cloth robes. In reality, it was fashionable for women to wear patent leather high heels, but there was no use for that here. Her feet were always bare. Her unpainted toes picking up dust bunnies as she paced the perimeter of her tiny apartment.

After the clothes changed, soon the bra was released. It was common in reality for women to wear a harness across their chest to become more pleasing to the male eye, but there were no male eyes here. She took off her bra on the 20th day and it has remained in the drawer ever since. At first it felt risky to forgo the harness, especially when she interacted with others to obtain food. Soon shame was also put in the drawer.

On the 50th day, she spent the entire day in the nude. She ate grapes off the vine like Dionysus. Her naked body warmed from the sun in places she could never confidently expose in reality. She sat on the couch, enjoying a tender piece of fried chicken, the crumbs falling on her bosom as the characters on the television argued about a crepe pan.

She had never felt so familiar with her body. Reality had given it back, and it was finally hers.

She stood on her back porch, overlooking the gardens of her neighborhood. Her breasts were concealed by two petunias planted in coffee mugs. As she stood there in silence, she briefly mourned the loss of her former life.

Those mugs once sat on her desk when she worked in the financial center. Now there was no more work and there was no more financial center. That part of the city had evaporated so quickly she barely remembered what the buildings looked like. She only recalled that people were always darting quickly in and out of them with anxious frenzy. She used to be one of those people, but now she was in rest.

At first sleep was evasive, her brain didn’t want to rest. Her mind was like a child who refused to take their afternoon nap. Sleep never came to her body naturally. She relied on a kaleidoscope of substances to keep sleep nearby, just in case her brain suddenly wanted it after all.

In terms of mind altering substances, she began drinking quite a bit. Sure, there was alcohol in reality, but often to consume it, she had to socialize out of the comfort of her own home. Being able to drink without stepping out of her front door was pleasurable for the first few weeks. She frequently projected videos of herself to friends, exchanging stories about how fun reality used to be. They shared their own stories of their departures from reality. Her friends too were all in different states of rest. At first, these drunken video chats were enjoyable, then the reality of rest hit her like a freight train, or maybe it was just the relentless hangovers. She began to opt for more herbal remedies that didn’t result in as painful of consequences.

She and cannabis became the closest of friends. Now she could call on cannabis any time of the day. She didn’t have to only see cannabis on the weekends and she clandestinely puffed away the troubles of the workday. Cannabis wasn’t entirely legal in reality, but in rest it was essential to maintain sanity. She’d inhale cannabis for various rest-related ailments. When her days became spiritless, she could rely on cannabis to provide temporary entertainment. Her monthly cycle came and cannabis was there to help ease the pain. She always needed cannabis on the days she got the news.

The news never went away. In rest, it was harder to ignore. In reality, the news would cycle so fast that there was never enough time to fully dissect it and confirm the truth. Politicians would yell at each other, igniting an avian sea of baseless opinions on Twitter, though action was rarely taken offline. Then, in a flash, Reality would move on to the next big news.

In rest, the news was inescapable. The news was on television and every single app on her phone. The news was plastered on every website. The news replaced lipstick and was painted on everyone’s mouths. She wanted to avoid the news altogether. She couldn’t bear the constant heartache of the tragedies happening in reality.

She never wished to return. She had made peace with rest. Reality had turned its back on her, so she turned her back on it.

In reality, she had forgotten the power of choice. Choices were too bounteous in reality. You could pluck choices from any tree, dig up choices in your yard; choices were everywhere. A plethora of choices led to an indecisive reality. Plentiful choice often led to no choices being made at all.

In rest, there were fewer choices to be made, yet they still existed. Each choice became more powerful and intentional. She composed the noises that echoed into her ears. She controlled the energy that flowed through her home. She orchestrated the tastes that met her tongue.

A Chicago based writer looking to expose the millennial mind