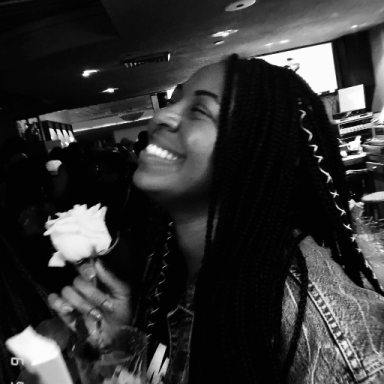 Having an anxiety attack is the most uncomfortable feeling in the world. Everything starts to feel cloudy, your hearing starts to blur, your body heats up and the sweat commences as the lightheadedness begins.

I remember the first time I had an anxiety attack on the train in New York. I had been here for about seven months and I was on the L train heading into the city for work. I was standing right by the door in front of a woman who was sitting with her eyes closed. We had been stuck in a tunnel for about seven minutes and that’s when it hit me out of nowhere. I started getting real antsy, it just seemed like everything was speeding up around me though we were still sitting in the tunnel, I thought my soul was getting ready to run out of my body. The noise on the train got so loud, I could hear everything, including my heart getting ready to convulse out of my chest. I was confused for a second, not sure what was happening.

I remember just closing my eyes and praying to God for it to stop and to give me strength. When the trains are stalled in the tunnel, my body can’t take it. We are all packed on this machine and it seems like the walls are coming in on me. I hate the feeling. I’ve felt it before. I took my hat and scarf off, unplugged my head phones and rolled my head back towards the ceiling. I was trying to escape the feeling but I couldn’t. It was scary, uncomfortable, and I just wanted it to pass.

I contemplated getting off the train and resting at the next stop. I kept envisioning this in my head, thinking the thought may take me out of the sudden impact of the attack. Then it happened, the woman sitting in front of me opened her eyes and looked up, she was getting ready to rise and assured me her seat was for the taken. No words spoken, it was as if she had read my body language and in return we both nodded in agreement as she stood up and turned towards the seat as to assure me it was mine, I sat. I felt like I had just been saved by the grace of God. Seriously. I can only remember thinking wow, God is good and her blessings are always on time and in abundance, she has definitely had my interests in mind this year. “Won’t she do it” I recited, as I closed my eyes and we finally reached the next stop, the doors open.

The woman who had given me her seat had rested her hand on the side rail, I wanted to touch her hand and say thank you. Where I’m from that’s normal, but not in New York, so I just smiled. It was as if the universe had heard my cry for help and somehow saved me from my distress. I kept saying small prayers of thank you in my head and thought how grateful I was to cross paths with this woman at the perfect time. I closed my eyes again, and could hear the noise from the train station coming in, there was a man beating on a drum singing “Every little thing is gonna be alright, don’t worry about a thing” and I just smiled inside because I knew the universe had spoken again.

Sometimes my mind doesn't feel like it belongs to me.