Skip to content
Report This Article
What is the issue?
If you’re having a bad day remember – at least you’re not Taylor Swift or KimYe.

Taylor’s most loyal hardcore fans who will admirably defend her no matter what. Literally no matter what. They will shut down any conversation criticizing Taylor (and not just for this issue) and will probably block you, too. Many of them are angry that members of Taylor’s squad have failed to stand up for her on social media, declaring said members as fake friends who will be “destroyed on album 6.”

This group of people have been, quote, “waiting years for this takedown to happen!” They’re probably responsible for the #KimExposedTaylorParty and are cackling over the debacle. They’ve suspected for a long time Taylor is a snake playing the victim card. Some are Kardashian fans, some are not. Some are even fans of Tom Hiddleston demanding Loki dump the pop star. They all have one thing in common – a disdain for Taylor Swift and her so-called shadiness.

They don’t really care much. They just enjoy the drama, clapping respectfully every time shade is thrown and a receipt is unfolded. This is their version of the Olympics.

Fans of Taylor and/or KimYe who can acknowledge their faves are problematic and have maybe probably done something wrong. They respect other people’s opinion. They will still voice favor for their celeb idol, but do so in a respectful manner without insulting anyone, and will call out said celeb if they do something stupid.

Truly doesn’t give a crap because there are more important things in the world. Most of them haven’t even heard or bothered to read about this fiasco.

Also does not give a crap because there are more important issues happening, but will make sure everyone knows it and will declare how much they don’t care by posting on social media they don’t care whilst mocking people/fans who do.

Not a supporter of any party, but will call out the mistakes and hypocrisy both/any of the parties have done. A few of them will write support long posts expertly dissecting the situation, whereas others are satisfied settling for a tweet.

Doesn’t like Taylor Swift being slut-shamed. Doesn’t like Kim Kardashian being slut-shamed. Somewhat approves of Taylor Swift’s white feminism being called out, but genuinely hopes she learns to have a more inclusive activism. 100% disapproves of another girl on girl drama, especially blown up by the media. (Also, Lena Dunham, who is a child molester who taught Taylor her brand of White Feminism is gross)

Can be die-hard Swifties or just plain hates Kim Kardashian. Will dismiss anything Kim has done and will do because “she’s a slut who takes her clothes off lmfao trash.” Kim could probably expose that Donald Trump is, in fact, Pepe The Frog in disguise and save us from the apocalypse, but these slut shamers would still choose to vomit on Kim any day. A handful will also resort to slut-shaming Taylor.

11. The Ones With A Guilty Pleasure

Thinks this whole issue is dumb, petty, and shallow, but is seduced by the drama anyway.

They insist everything is just one big publicity stunt to gain the celebs more $$$ and exposure. Actually correct in stating the media is profiting of our consumption of this. We’re all block-headed enough to fall for it.

It's pathetic how quick our culture is to sensationalize a fabricated story..

Gurl, you dug yourself into such a deep, messy hole you deserve your own number smh. 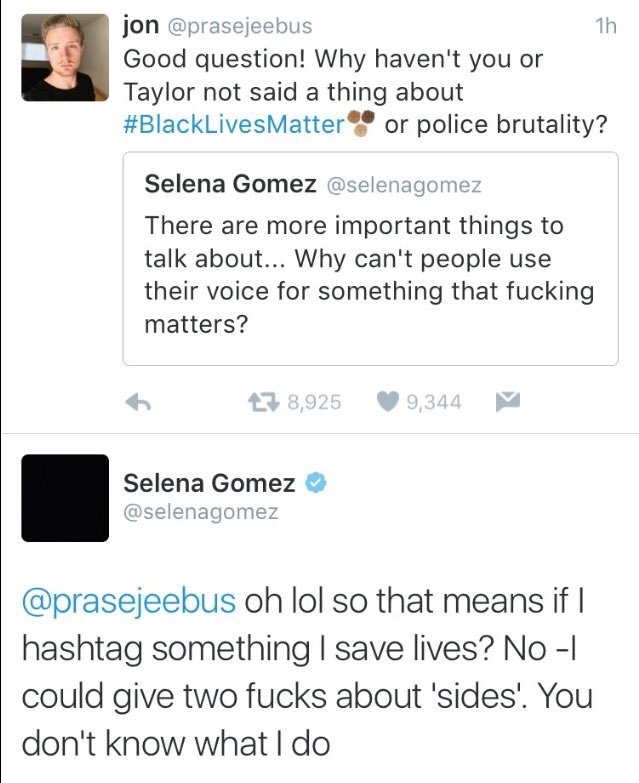 I’m A Big Taylor Swift Fan, But I’m NOT On Her Side With This One