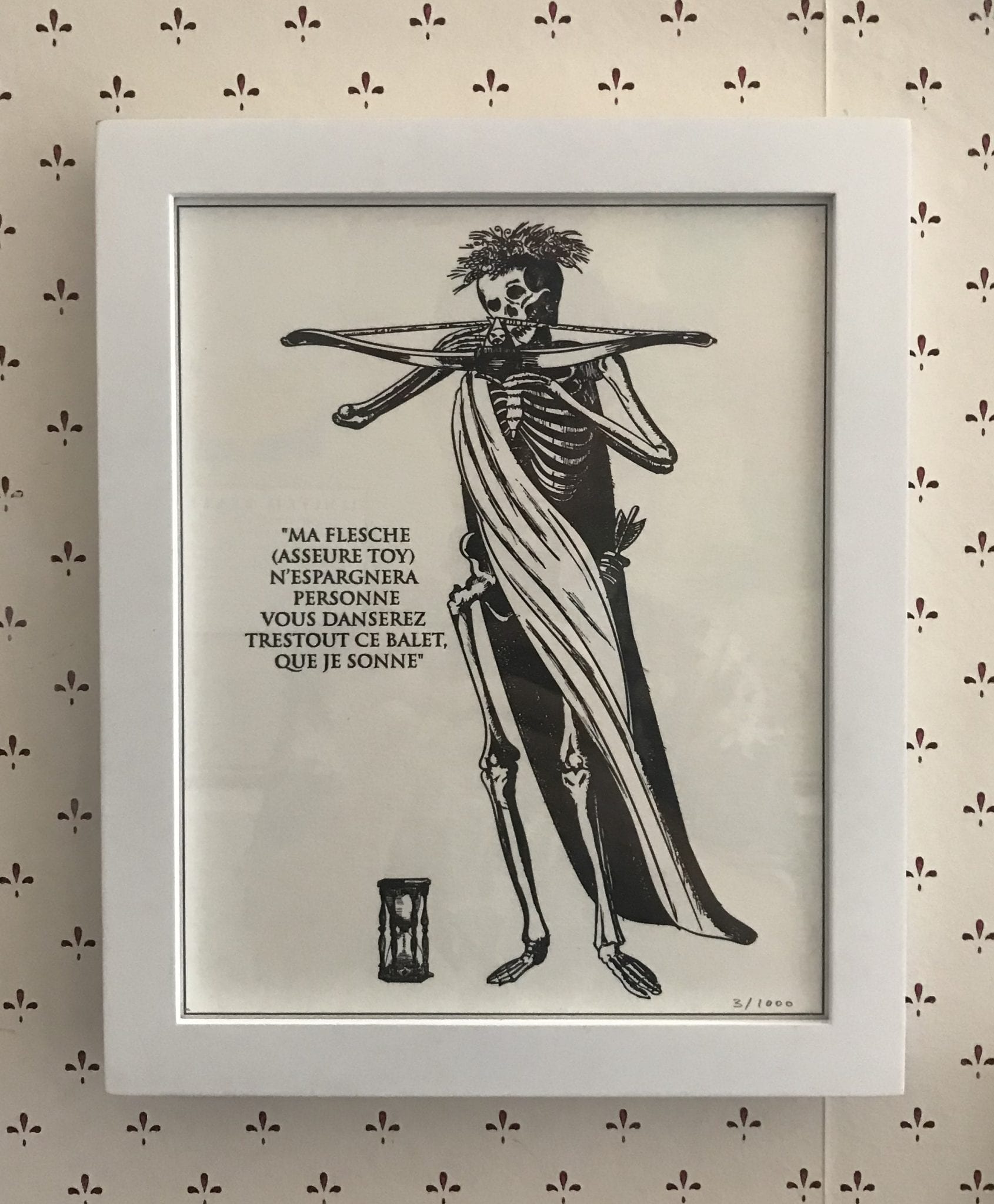 Let us imagine that it is the late 17th century. A young French nobleman walks down the stairs from his bedroom in a castle in Loire Valley. As he gets to the landing, he pauses, first to look out through the window at his sprawling estate below. This is wealth embodied, he can see the towering fortified walls and vast gardens. Then, he turns slightly from the window and looks directly at a small engraving which is framed on the wall, exactly at eye level.

This engraving is macabre to say the least. At the forefront is a standing, smiling skeleton, aiming a loaded crossbow. An hourglass rests by his back foot. A broken arrow sits beside it and there is another one in the quiver.

My arrow (I promise you) spares no one

You will all dance the ballet of which I sing”

This would have been part of the owner’s memento mori, part of a daily ritual many people practice to remind themselves of their mortality, of the urgency of life and the fragility of existence. Where this engraving comes from, we don’t know. Who created it is unknown as well. For how long it hung on someone’s wall we don’t know either.

All we know is that eventually, as the years passed, as empires rose and fell, as wars began and ended, and as the inscription’s prophecy proved true for successive generations of owners, this engraving made its way to the collection of the Blanton Art Museum, where you too can stand in front of it, as it hangs at eye level, and stare down the wrong end of that crossbow. If it’s quiet enough, and you concentrate, you can almost hear the skeleton sing his haunting song.

Life is short. You are mortal. You will die.

There is a line in the movie Gladiator—now improperly attributed to the real life Marcus Aurelius in countless memes—“Death smiles at every man, and all a man can do is smile back.”

This is the most interesting part of this infamous engraving. The skeleton is grinning, a big shit eating grin in fact. The symbolism is dark, but it’s also absurd.

The truth is that death is absurd. For all of the incredible odds that brought life to this planet, everything that is born…is born to die. While we are alive, what keeps us breathing, what keeps our blood pumping is death—what we eat comes from death, our spot in the ecosystem exists because of the species we have killed and the environments we have taken from other species. Who lives and who dies seems almost random and actively contemptuous of our plans. The lives of health food inventors and people who strive to live forever, are cut short almost ironically early. Meanwhile, a guy who smokes cigars and drinks whiskey every day is alive and kicking at 112. Death can come and take us at any time, for the most ridiculous of reasons. Chrysippus, the famous Stoic, died because he laughed too hard at a donkey eating figs in his front yard.

Perhaps this is too painful to think about for most people. So we deceive ourselves. “I’m going to live forever,” we think. Or, if not forever, for longer than everyone else. That’s what J. I. Rodale thought, the founder of Rodale Publishing, which now owns Men’s Health, as he confidently told comedian Dick Cavett he would live to be one hundred years old. Scarcely were the words out of his mouth when his heart stopped. He died right there on the couch of Dick’s talk show. He was 72 years old.

That’s life. That’s death. The arrow spares no one. The dance includes everyone. All we can do is smile back, move to the rhythm when it calls us, and not be an arrogant idiot while we’re here.

It seems that previous generations were smarter than us, or at least more humble. They commissioned so much art, like this engraving, that it created its own genre Vanitas. But even within that genre, the subgenre “The Dance of Death” (Danse macabre) is immense. There are hundreds, if not thousands, of murals, engravings, woodcuts, stained glass windows, statues, paintings and sketches.

More than “art,” this was a practice. “Danse macabre wasn’t just a generalized response to mortality,” says Elizabeth Welch, a curator at the Blanton Museum, “but instead specifically a performative social leveling that could be used by Late Medieval Christians to think about mortality and the inevitability of physical decay.”

The first Danse Macabre dates back to the 15th century in a large mural created for the Holy Innocents’ Cemetery in Paris. Another, Totentanz, painted by Bernt Notke in Germany in 1463 depicts a number of figures from all walks of life—a pope, a peasant, an emperor, an infant, a doctor, a knight, a priest—interlocking arms and dancing with dark skeletons in one long chain. One skeleton plays the flute, providing the music for the scene which reminds them all that they will die, no matter who they are, or how powerful their position. And both pieces of art are themselves meta-reminders that everything passes and nothing lasts forever. The first Danse Macabre was destroyed in 1669 to make room for a road. The second survived for 479 years until Allied bombers brought about its ruin when attacking Nazi targets in the city of Lübeck on March 28th, 1942.

It is fitting that these powerful pieces of art which have served as reminders for so many people for so long would themselves meet their end in immolation, dancing their own dance of death.

Yet even now, as reproductions or simply as descriptions, the message stands. And having stood in front of that unnamed engraving at the Blanton Art Museum, I wanted one of my own. Working with an artist, I had the drawing recreated and reproduced via letter press, and now it hangs on my wall, in the stairwell (you can get one for yourself here). I pass it after I look through the window which overlooks the lake by my house. When I pass it, when I see that crossbow aimed between my eyes, I think of the lyrics from the dance,

[Death to Emperor:] Emperor, your sword won’t help you out

Sceptre and crown are worthless here

I’ve taken you by the hand

For you must come to my dance

[The peasant to Death:] I had to work very much and very hard

The sweat was running down my skin

But here I won’t have any luck

Who was the fool, who the wise man,

who the beggar or the Emperor?

Whether rich or poor, [all are] equal in death

And then I go to face my day with a smile and a sense of urgency.

Because what else can you do?

No Matter What, You Can’t Ruin Everything

What Randy Newman Can Teach You About Love