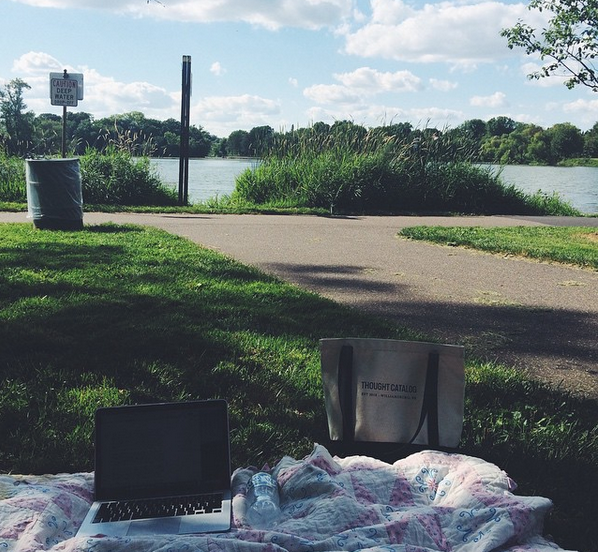 I seem to get asked that question a lot. In the last year alone, I wrote something like 100+ articles for a dozen or so different publications, including my own site. If I had to guess, that’s somewhere in the range of 120,000 words. On top of that, I’ve written two books and ghostwritten another in that same period.

Lots of people write more than me (though it’s usually their full-time job) and I’m envious of those folks. Myself, I try to do roughly two articles a week, one of them here for this site. By 2016, I’ll have published five books and contributed to several others.

Aren’t there better things to do?

What do you get out of it anyway?

The short answer is that I HAVE to. In two senses of that word. The first in the sense that I’ve committed to doing it and creative commitments help with motivation. The second in the sense that I feel like I’d go crazy if I didn’t. It feels good to say and get out things that are inside you.

I think most writers would agree. But if you pressed me for more of an explanation, I’d say I write a lot…

We don’t think about this enough but there has never been a better time to be a writer. The idea that any person could write and publish as much as they want is a totally new and unparalleled scenario in the history of publishing. Read any writer’s memoir from 25 years ago or older and it’s full of complaints–articles being rejected, books being turned down or sent back from editors, crappy assignments being handed down from newspapers.

If I wanted to publish an article every single day–or 10 articles a day–I could. And those articles could find readers if they were good. This is a blessing. Every writer should be grateful. And this isn’t even getting into the other things we take for granted: that the means of production have never been easier (writing on a laptop is a lot easier than writing by hand), the means of transmitting our content (to sites and to the public) has never been easier, and there are few editorial filters and content constraints.

If a thought pops into your head, no matter where you are, no matter how vulnerable or trivial or offensive that thought might be, you can write it down and publish it almost immediately (of course that doesn’t mean that you always should). We can write whatever we want, whenever we want, however we want. I find that liberating and inspiring and do what I can to take advantage of this gift. Not every generation has been so lucky. In fact, many writers from the past would kill to live in the time we live in.

I am lucky enough to be compensated for much of my writing. The idea that if I put the time in to produce something of value, I will be paid for it means that dicking around is hard to justify. I pay my mortgage by writing and every week I take off, I’m depriving myself and my family (or so I tell myself). I won’t lie–that’s a big part of my motivation for scheduling and setting aside time to write.

Since deciding to step up the amount that I write, I’ve seen my platform grow steadily. My email list has roughly doubled, the average amount of readers per piece has grown, and the sales of my books have steadily increased as well. Ideas I’ve tooled around with on sites like Thought Catalog have turned into business opportunities, speeches, clients, even material for my books.
But when I say should I don’t just mean financial motivations. I have become a much better writer as the result of committing to produce more. There is only one way to improve at a craft–and it’s putting hours into it. I consider what I write online to be practice. An opportunity to interact with an audience and challenge myself to continually improve. Let’s say that in the last 3-4 years I’ve written something like 300-400 articles or blog posts. A conservative guess would say there is at least 3,000 hours of writing and research involved in that production. Another guess would put the combined readership at many millions of views (5-10M? I’m not sure). Those hours + those eyeballs (and the comments and emails that came from them) have helped me improve in ways that I could not have imagined. The road to mastery is long, but I’d like to one day reach it. And if I want to, this is what I ought to keep doing.

Because I need to.

This is the most important reason. I know it because even if the other two reasons weren’t true–if I had to do it for free and hardly anyone saw the writing–I’d still be doing it anyway.

Writing is how I express myself. It’s how I make sense of the world I live in and the thoughts that I have. If a writer doesn’t consider themselves as an important member of their own audience, they’re just showing off. A huge chunk of what I publish is published because I felt I needed to hear it. I wanted to learn about a certain topic, I wanted to put together a certain exercise or answer a specific question I was struggling with it. Publishing is the by-product, writing is the process.

Writing is how I express myself. It’s how I make sense of the world I live in and the thoughts that I have. If a writer doesn’t consider themselves as an important member of their own audience, they’re just showing off.

People who aren’t writers don’t know what it feels like to have vague ideas and messages deep inside that you feel like you’ll die if you don’t get out. Most people don’t have a career that requires them to work for years on spec before they get paid–nor is their ‘success’ so dependent on the whims of an audience, editors and press.

Those are the painful parts of writing that many cannot even conceive of. The good news is that the pleasures are also out of the grasps of those who have never heard the calling. What it feels like to be in deep flow and creativity, or how satisfying it is too look back on what you’ve written and wonder where it all came from (to look back on my production week in and week out is very satisfying). Or just the pure pride that comes from making a living off your thoughts and the joy you feel in your characters and words which become living, breathing things.