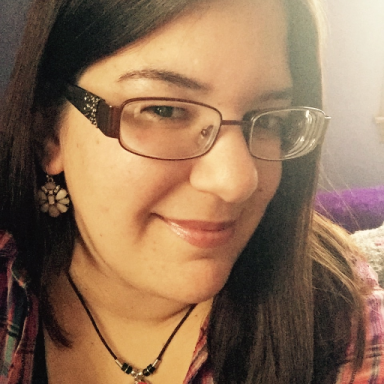 For decades, I was a vacant hallway. Nothing more than a home for occupied rooms, holding space for what wasn’t mine. But no one ever stayed.

This self-belief carried over into adulthood, and I was known as the woman in the office who didn’t speak to anyone. If no one was willing to pull me out of my shell, then I guess no one cared enough, I told myself. I expected the rest of the world to give me a green light, let me know it was safe to be me. To speak. To just be. All because of some bad experiences.

But years of lugging around a negative self-image became painful and exhausting. I couldn’t live like that anymore. I couldn’t keep myself trapped and expect others to pop the bubble. My biggest mistake was waiting for others to do the heavy lifting. I gave up, made myself small to the point I had no voice anymore. I allowed others to walk all over me, willingly became the rug under their feet. I was the invisible one. That’s who I became in my own story.

I understand the devastation of feeling forgotten, especially when it becomes a part of your identity; the quiet girl, the shy one. But you need to rewrite your story. The law of attraction is a real thing, and it took me years to realize this. You are energy, and whatever energy signals you send out is returned to you at a higher frequency. So, if you continuously feed the monster in your head, the one telling you that you don’t matter, then it will only become stronger. And everything around you will align with that thinking, trust me. I promise you that believing you’re invisible is only a lie you tell yourself, all because you lost your voice, and you have nothing else to say. This lie is a hurtful, deadly one. You have the power to destroy lives when you don’t believe you have an impact. You make more of an impact than you know. Don’t plunge a knife in someone’s heart and let their blood be your wakeup call.

Put yourself out there. Take a small risk every day, even if it’s to let someone know they’ve inspired you. You will move them to tears and reaffirm their purpose.

One lesson I can take away from my five-year-old self is that she kept reaching out and hugging those who needed it. I suggest you do the same – tap into your inner child and hold her tight. This can be through writing, meditation, or anything that brings you joy. Give her the love she deserves and she will be your best teacher. Keep being you—someone out there loves the parts of you that you can’t find it in you to love.

Until then, realize you are here for a deeper reason. If that reason isn’t obvious to you, carve one out: Ask each person you love to tell you one thing they feel is unique to you. (I only suggest asking others close to you because it’s not easy to see ourselves objectively when we’re hurting.) Write each one down on slips of paper and place them into a tiny treasure chest or trinket box. When you’re feeling down, close your eyes and pick out one of the slips. One of mine would say, “You hold space for people.” That’s something I believed was negative, that meant I was empty. No, it means I see people’s hearts, I keep them safe in my hands. And that’s the most beautiful and sacred thing you can do for another human being. This will help you see that you are never forgotten if you “hold space for people” or whatever is unique to you. You will never be forgotten if you make yourself known, I promise.

Meditate. You realize you carry an entire universe inside of you. For this, you can never be forgotten. It’s also a good way to sit with yourself and discover what you value. Having strong convictions (with an open heart, of course) will give you a voice.

Write, journal, paint, do whatever makes you feel good to remind yourself the world needs your gift. Without you, people are missing out on someone special. Someone out there is missing you without having met you.

I’m not saying you won’t ever feel this way again, and I’m not trying to preach clichés about self-love. I understand this will linger because it’s been a part of you since childhood. You spent decades breathing underwater, and now you’re tired. I get it. As an adult, I still find myself fading into the background when I feel like others don’t need me. But instead of completely pulling away, I make a conscious effort to pull myself back into reality, whether it’s pushing myself out there or creating in some capacity.

One of my favorite new exercises that empowered me was writing to my future self. Manifesting your life is such a powerful thing. Writing to your future self and seeing it play out over time is incredibly exciting! Let that be something to look forward to. Let that remind you of the dreamer within you. Live out every dream you’ve ever had. A magical being like yourself can’t possibly be forgotten.

Instead of feeling like part of the background, the feeling of being forgotten will become background over time, I promise.

When will you go to the ends of the earth for yourself?

I can tell you, the only time is now.

Breaking out of my comfort zone, one word at a time.