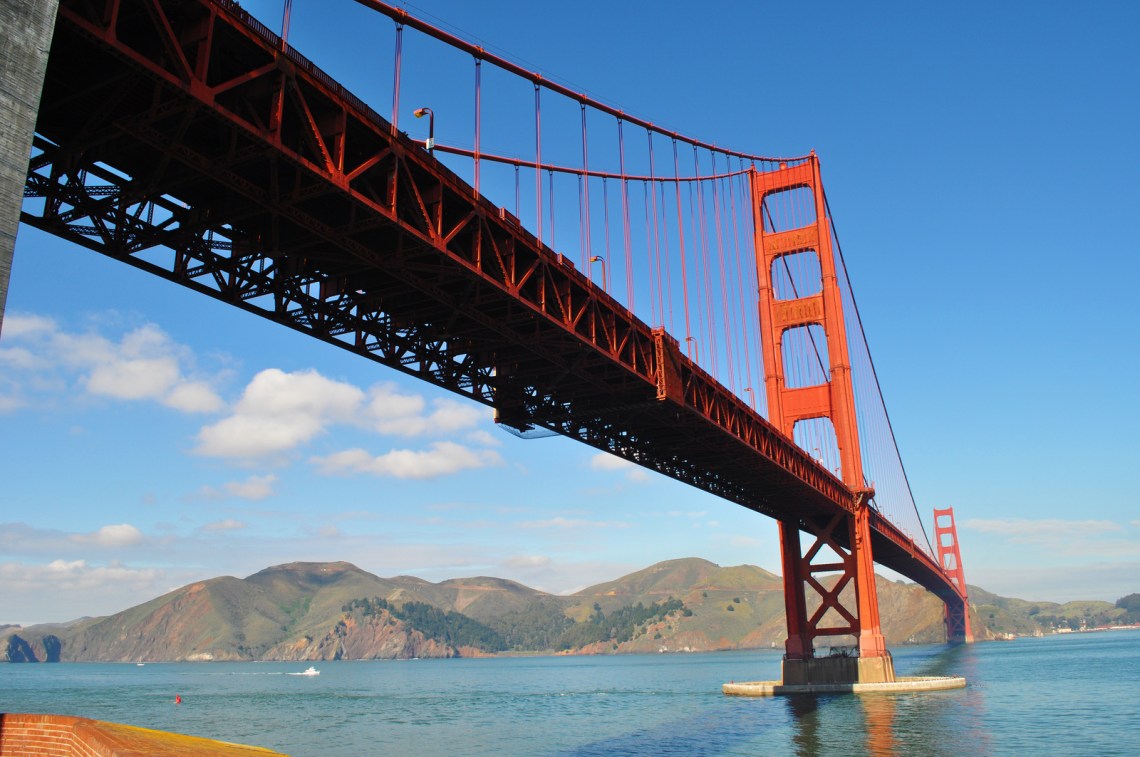 As Kevin Hines walked across the bridge, he was sobbing, telling himself, “If one person asks me if I’m okay, I won’t do it.”

He gazed over the railing and stood for 40 minutes.

When a tourist approached him, Hines thought that this could be what would save him.

Instead, the woman asked for him to take a picture of her, and in that moment, he confirmed to himself that no one cared.

He leapt over the railing and jumped- descending 220 feet at over 70mph.

In that instant, Kevin knew he didn’t truly want to die. Then he hit the water.

Nearly 80 feet below the surface, Kevin opened his eyes and realized he was still alive. This was his last fighting chance.

Having shattered three of his vertebrae, Kevin could only use his arms to make his way back to the surface.

Bobbing up and down in the water, Kevin felt something brush up against his leg.

Thinking it was a shark there to finish what he had started, he didn’t know it had actually been a sea lion keeping him buoyant, an account later proven to be true by witnesses.

As the coast guard made their way over to Kevin, they hoisted him up onto a flat board and secured him in a neck brace.

Frantically working on him, the coast guards asked if he knew what he had just done.

He replied, “Because I thought I had to die.”

On September 25th, 2000, Kevin Hines had attempted to take his life by jumping off the Golden Gate Bridge in San Francisco. He failed, unlike the many that have succeeded; the number currently being estimated at 2,000 deaths

Every year, 40,000 Americans take their own lives. In 2012, suicide was ruled the 10th leading cause of death behind cancer and heart disease, according to the Center for Disease Prevention and Control.

On average, one suicide occurs every 17 minutes, with the elderly dying by suicide every 1 hour and 37 minutes, and a young person (age 15-24) every 2 hours and 12 minutes.

This takes a financial impact on the country as well.

In the United States, suicide and self-inflicted injuries accounts for medical and work loss costs of $41.2 billion dollars annually.

In spite of these devastating statistics, this fatal epidemic continues to be largely ignored.

To Kevin Hines, suicide survivor, author and speaker, mental illness as a cause of suicide is not only a nation-wide epidemic, but a call for a New Age civil rights movement.

Often people, who die by taking their own lives, are deemed by society as “cowards”, but Hines states that isn’t the case.

According to Hines, when he attempted to take his life at the age of 19, it was not simply a choice, but a compulsion.

“I never wanted to die that way; it was just something I felt I had to do. It’s important to recognize that distinction, between wanting to do something and having to do something.  I was compelled by my brain’s inability to comprehend reality.”

Hines had grown up in the Ingleside district of San Francisco, born and raised Irish Catholic by his adopted parents. He attended St. Cecilia’s Interparochial Catholic School, Archbishop Riordan High School, and eventually the City College of San Francisco.

“Both my biological parents had passed away due to mental illness and drug addiction. But I consider both of my adopted parents and my birth parents as my two sets of parents- I don’t differentiate between the two”, Hines says.

Having struggled with epilepsy in his life, he was put on and taken off his medication between the ages of 16 and 17. This was around the time he began to experience troubling symptoms.

“That was when I started to have a complete mental breakdown”, Hines says.

At the time, Kevin and his parents weren’t aware that the epilepsy medication he had been taking was suppressing the symptoms of his bi-polar disorder, a mental disorder characterized by manic highs and depressive lows.

At the end of his junior year, Hines began hearing voices, thinking that the other students in his play were plotting against him.

“During my high school spring musical, I began losing touch with reality; I became paranoid, and thought that the people surrounding me were, as I would say then, trying to ‘ruin me’.”

Kevin’s parents recognized then that he needed help, and quickly sought a psychiatrist.

Initially visiting the doctor in a depressive state, Kevin was diagnosed with and prescribed for major depression, until his doctor recognized he was in fact bi-polar after falling back into mania.

“My initial medication was prescribed and moved around as we went along during the process, but the biggest problem that stopped me from getting well was that I wasn’t accepting that this problem I had was all legitimate.”

Hines began going on and off his medication, often combining this with drinking alcohol until he blacked out.

“As I got through every day, I was really just pretending to be okay most of the time. And when it was clear I was not okay to my family, they didn’t really know what to do. They didn’t know what actions to take.”

Shortly thereafter, Hines grandfather had passed away, as well as his teacher. This was when things began to fall apart.

“When I was 18, my drama teacher, my mentor, had killed himself. And it was terrifying. This guy I really looked up to had shot himself with the same gun he used as a prop in our plays…a gun which we thought had been fake.”

Kevin then began to experience more extreme mood swings in September of 2000. He would skyrocket into mania around Thursday, and then fall into a depression the following Tuesday.

Towards the end of the month, Kevin began having suicidal thoughts, leading up to his attempt.

On the day of the attempt, Kevin was dropped off at the City College of San Francisco by his father.  He found the most readily available counselor, and asked to drop almost all of his classes.

Even though Kevin was in an apparent state of distress, the counselor dropped his classes for him, no questions asked. Proceeding to attend what he thought would be his last English class, then later on taking the muni train out to the bridge.

After Kevin had jumped, and was rescued, he was immediately taken to the hospital.

Kevin’s father, Patrick Hines, had received the news that his son had jumped off the Golden Gate Bridge. He raced to the hospital fearing that he would be asked to identify his son’s body.

“My father is the type of guy who doesn’t flinch, certainly doesn’t cry,” Kevin explains. “Doesn’t show any kind of pain or struggle even though he’s been through a lot. He is what they call a ‘tough Sunset Irishman’.”

“He took one step into that room, and waterfalls began pouring out of his eyes.”

Kevin recalls the tremendous rush of guilt his father had for not being able to see what he was going through.

“This is important for people who have lost others to death by suicide,” Kevin says, “It is nobody’s fault, not the person who committed it, and not their families, it simply occurs as a national phenomenon.”

After spending months in the hospital, Kevin was transferred to a psychiatric ward, a place where he would discover a calling he never knew before.

One day, Kevin was approached by a Chaplain while resting in bed, asking him what he was in for.

Kevin told him he had jumped off the golden gate bridge, and survived.

The Chaplain, thinking he was delirious, joked with him, saying “Oh yeah, and I’m the pope!” Kevin’s father came in and assured the Chaplain, “No, brother, he’s telling the truth.”

The Chaplain, amazed by this, told Kevin that he needed to tell people “about this”.

“About what to whom?”, Kevin asked.

The Chaplain looked down and said “your story can help those who are struggling.”

Brushing him off, Kevin didn’t think much of it.

After being released, Kevin and his father returned to church at St. Cecilia’s in San Francisco, where the priest asked if he would come and speak to their 7th and 8th graders on Good Friday.

Kevin, hesitant at first, was encouraged by his father.

“You’ll do it.” His father said, pushing him forward. “You need to do this, this will not only help you, but it will help them as well.”

Shivering and shaking, Kevin gave his speech on Good Friday. As he ended the speech, the audience erupted into applause and began asking questions.

Kevin returned home that day, still sure he hadn’t made much of a difference.

Two weeks later, he got all of 120 letters from every student, some actively suicidal.

Because they were minors, those letters had been screened, and those kids ended up getting the help they needed, giving the children the encouragement to reach out when they felt they were struggling.

“That was the moment, when I saw those letters; I knew I had to do this.  I had to speak to whoever I could, whoever is willing to listen and try to help other people.”

Hines now travels around the world, speaking to people about mental health in hopes of spreading a message that shows no one is alone.

However, even after surviving suicide and finding a new path, Hines explains that the work doesn’t end there.

“Between 2000 and 2014, I’ve had seven psychiatric stays”, Hines says. “Mental health is something that needs to be worked on constantly, and it isn’t something that just goes away.”

Hines also states that the reason he attempted to take his life, is that he didn’t know how to ask for help.

“No one should suffer alone. The idea of people being alone in mental illness is far from reality. Let’s start talking, let’s start being honest, and stop being silent.”

And mental illness is certainly not something that is uncommon.

According to the National Association of Mental Health, one in four adults, approximately 61.5 million, experience mental illness in a given year. One in seventeen, approximately 13.6 million, lives with a serious mental illness, such as schizophrenia, major depression, and bi-polar disorder.

“We can no longer walk by people who are in pain and just keep on walking. We must believe it’s our job to try and help,” Hines says. “We are not only responsible for ourselves, but we are also responsible for each other, as our brother’s and sister’s keepers.”

Often, people suffering from depression and suicidal thoughts, feel afraid to ask for help, with the notion that they should be ashamed for feeling what they are experiencing or that they don’t deserve help in the first place

It is an indication that as a society, we must do better in offering help, and in return making sure people do not feel afraid to ask for it, because when we ignore the mentally ill- they ignore themselves.

“It is important that we stand up and feel strong enough to openly say “I have a mental illness and I will fight it to the nail, and I will help others who live with it’,” Hines concludes.

14 years after the attempt, Hines is asked what he is thankful for.

He smiles, and says “everything.”

*If you or anyone you know may be suffering from depression or suicidal thoughts, do not hesitate to ask for help. Reach out to a friend or family member, and if it is an emergency, call the National Suicide Prevention Hotline, 1-800-273-8255 or call 911.*