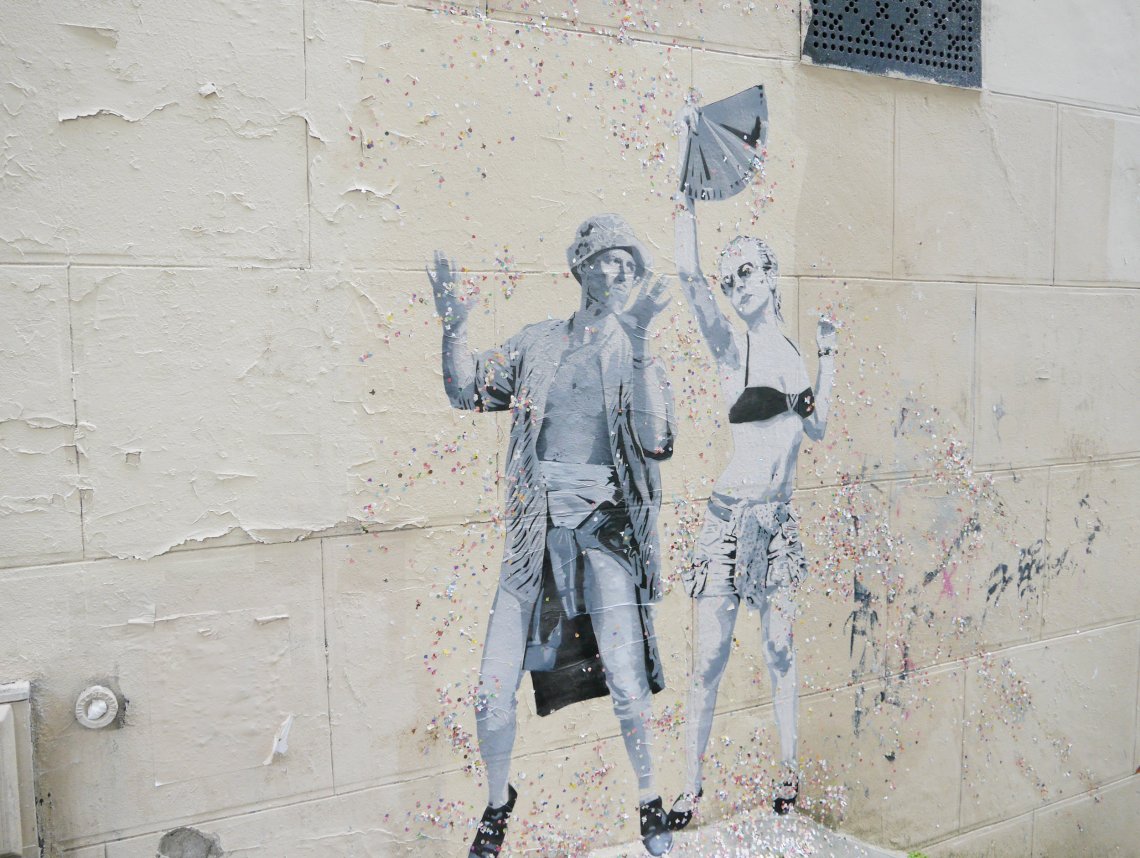 I was unpopular at school. When I say unpopular, I mean REALLY unpopular.

I was the kid who sat alone in the corner of the classroom with my overgrown hair pulled over my eyes. The one with no friends whatsoever, whom no one invited to their birthday parties, who got picked on non-stop. My peers threw chairs at me, spat on my exercise books, tore up my work and called me names. Some of the cutest nicknames included ‘hipster bitch’, ‘whore bag’ and ‘dustbin.’  There is a child like me in every class. You might have lived that too. If so, I’m sorry. Send me an email and let’s talk about our traumas.

It was sort of my fault for being such a dysfunctional person. I was probably the only 10-year-old to ever get a detention for eating daisies in class. I also had my tray confiscated (for the uninitiated, British schoolkids have a draw under their desk as a locker.) Why? I had filled it with cat food, hoping the smell could lure one in to sit on my lap.

Guess what? I am super grateful for being unpopular. There is no way I would change it for anything. I mean it.

Being an unpopular child was one of the luckiest things which happened to me. I am not normally of the belief that pain is beneficial and I’m rarely grateful for events which suck. Start spouting ‘what doesn’t kill you makes you stronger‘ crap around me and I will slap you. This one instance when I do, however, agree with that sentiment. I agree because hindsight is everything and I can see now how much good it did me to spend a decade getting kicked around.

It was what forced me away from the petty world of playground drama and into books and writing. At primary school, I learned how to use Word and typed out stories about magical dogs. When teachers insisted I get off the computer, I wrote in notebooks. When they confiscated my notebooks, I wrote in my school planner. When they took that away, I laid out stories in my head and transcribed them later. Instead of playing British Bulldog and Kiss Chase like my peers, I wrote.  The stories were for me alone,  and sharing them was not even part of my paradigm. I would have fought you tooth and nail if you tried to post them online. How times change.

My obsession with books began then. I recall how I would creep out of classes and stay in the library until the teacher sent someone to drag me back. The best days were the ones when no one noticed and I remained there until home time. Heaven! When my mum picked me up, she knew to check the library first. Books were the center of my life. Not much has changed since then, as you might guess.  I read whatever I could get my hands on. The encyclopedia, the bible, the dictionary, adult novels, the phonebook, my brother’s textbooks, newspapers, anything. I was not discerning. My peers were of no interest and I needed something to do in school.

The thing is, I have always loved learning but I hated school.

Being unpopular at school allowed me to love learning. It is counter-intuitive, yet true. No one learns much from the actual curriculum in school. Because schools are not, whatever anyone says, about learning. Schools exist to create obedient workers.

It is where our personalities form and we begin to decide what to do with our lives. Classes were not very engaging for me, aside from English and Art.  Being forced to do something you hate is the absolute best way to figure out what you actually enjoy. In my case, it was maths and science. I couldn’t goof around with friends during classes- I had to entertain myself.

Secondary school was in some ways worse than primary.

It was a high ranking, all girls grammar school, difficult to get into and the workload was heavy.

Little cliches of confused girls formed and crashed around, trying to fathom out who we were. We went through all those teenage rites of passage together. The first cigarette, alcoholic drink, nostril full of drugs.

We became close, had crushes on each other, dated, fell out and fought. It was a cycle which went on for years and left indelible marks. Disasters came thick and fast. Girls got ill, were assaulted, lost family, moved away, went through horrible things. Everyone knew everything about everyone in that claustrophobic world. I remained unpopular.

A few weeks later, a group of religious girls I had never spoken to walked up to me and said ‘If you get an abortion, we’re never speaking to you again.’ Turns out they had heard I was pregnant.

I came out in a maths lesson one day. A teacher told me my graph wasn’t straight and I screamed, “NEITHER AM I.” I dated a girl and lots of people freaked out. Everyone got scared I was going to hit on them. I sighed a lot. Then, a while later, being bisexual became cool. In the span of a week, half the school had girlfriends and gay pride bracelets.

I got depressed and everyone thought I was weird and crazy.

A teacher told me to stop damaging the reputation of the school. “If people who are actually ill can come to class, you definitely can!” she said. I ignored her because I had the energy to say about 5 words a day at that point and didn’t want to waste any. Then mental illness became cool and everyone diagnosed themselves with a few. Popular girls discussed their terrible social anxiety in the same breath as parties they had been to.

On the final day of school, it’s tradition for the senior class to pull pranks. I printed out hundreds of pictures of doge and stuck them everywhere. I don’t know why. 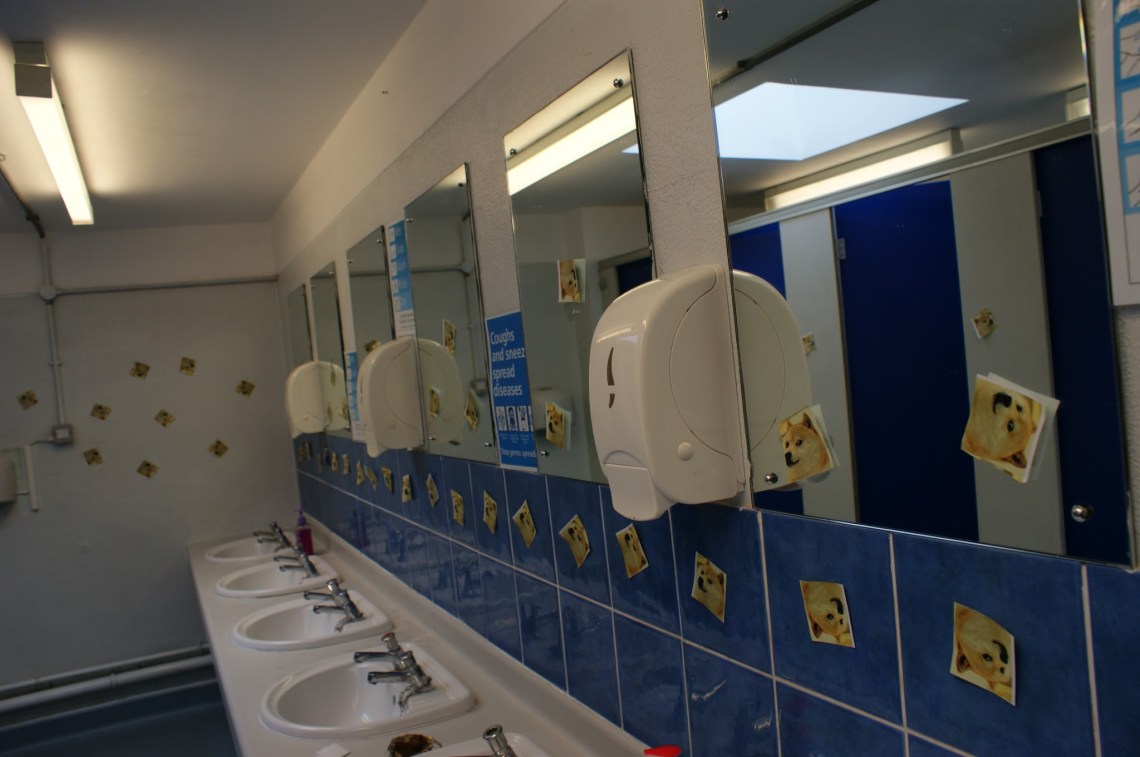 We all celebrated the end of an era on the playing field, with pizza and a bouncy castle. I got drunk on an Irn Bru bottle full of brandy. Pictures from the day show me in a flower crown, fairy wings, and a lace tutu. Everyone was super glad to be leaving. People who had treated me like dirt for years hugged me and asked for selfies. It was bizarre. I left with a handful of friends and we went to bulk buy condoms in preparation for adulthood. We were certain that wild times lay ahead and it seemed a necessary precaution.

I went to college a few months later. A sudden liberation from uniform codes meant I had bright purple hair by this point. I wore liquorice allsorts print leggings and a plaid shirt with green creepers on the first day. It was an artsy place, so I was certain I would meet many like-minded people.

Thwarted once more. I went straight to spending my breaks reading under a tree with a packet of pop-tarts. I got depressed again, failed at everything and left after a few weeks. But when I returned a year later, it was different. I met friends.  I realized I needed to stop feeling like I was stuck in school. Popularity is not a relevant concept once you are older than about sixteen. No one cares anymore. I don’t worry about people not liking me – I worry about being a nice person and doing good work. If someone dislikes me, it’s not a problem. There are quite a few people in the world and most of them are also nice. You can’t make an omelet without breaking some eggs and you can’t grow without losing some friends.

The events recounted in this post have all become stories now. It’s easy to forget that they were once real moments which I lived through. Many were painful or horrible at the time, even if they sound funny in retrospect.

As always, I began with a coherent point and have ended up somewhere different.

Being unpopular made me tough as hell. I got used to incessant criticism, of myself and everything I did. It stopped bothering me to the same degree. When you are the class whipping girl, every aspect of your existence is a problem to someone.

It taught me to pay attention to the misfits, the people on the fringe, the purple cows. After all, I was one of them. I still am.

Keep up with Rosie on rosieleizrowice.com