For as long as I can remember, the screams were carried in by the rain.

Looking back, I suppose it was strange. But you can’t fault me for thinking it was normal, can you? After all, I grew up with the high keening, cutting through the raindrops like an arrow. It was a sharp sound, one that you couldn’t miss, but I never took note of it, simply for the fact that it was always THERE. It was as much a sound of my childhood as the tractor engine firing up in the morning or the owls dancing out by the barn. It was a fact of life, one that I was comfortable with.

I didn’t realize anything was strange until I was about eight and my older sister came home from college. I have five siblings, making me the youngest of six. Samantha was a full 10 years older than me, and as the eldest sibling, she had very little to do with me as we grew up. Still, I was the one she chose to confide in when she came home from college.

I remember that first break so clearly because she was so distraught. It was fall break, and the moment she stepped into the house she was jumpy. She was gloomy and brooding, so different from the giggly emails she usually sent mom and dad. No one else seemed to notice the difference, but I, who had always looked up to her, could tell right away. 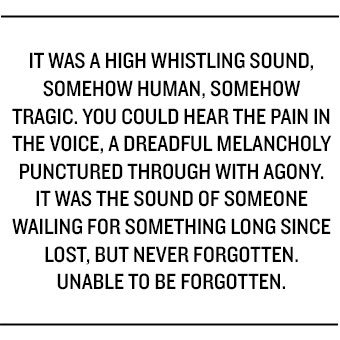 She didn’t say anything until the third night of her break, when the rain came tumbling down and the wind billowed against the side of the house. I was lying awake in bed, listening to the tap dancing of the rain on the roof, when the unmistakable sound of her bare feet on the wood floor approached my room. She slunk inside, trying not to wake up our sister, Carrie. She crawled up onto my bed, seeming to understand that I wouldn’t be asleep, not on a night like this.

But, at the time, I couldn’t have told you why the rain would keep me awake.

“Laura. You hear it, don’t you?” she whispered, her voice fragile and weak against the bleating of the wind.

“Hear what?” I asked. I tried to pass my voice off as sleepy, but even I could hear its alert edge.

She leaned in close to my ear.

“The screaming, Laura. The screaming. It comes with the rain. I didn’t notice it until I left the house. But the screaming doesn’t happen anywhere else, Laura. It’s just here.”

She paused and in her silence I could hear the house creaking wildly. It felt like a wild beast, just barely contained. I shivered. She continued.

“Why do you think that is? Why is it just here?”

My answer didn’t warrant a response. She crawled back out of my bed and I watched as she padded her way out the door, her white nightgown glowing pale in the moonlight. She was ghostly, an omen. I shut my eyes and listened to the rain.

And, for the first time, I concentrated on the screaming.

It was a high whistling sound, somehow human, somehow tragic. You could hear the pain in the voice, a dreadful melancholy punctured through with agony. It was the sound of someone wailing for something long since lost, but never forgotten. Unable to be forgotten.

My hands crept up over my ears as I tried to forget that sound. God, that SOUND. It had never struck me as strange before. But, at that moment, it was all I could hear. It filled me.

Somehow or another, I passed that interminable night. Samantha never came home for break again, much to the dismay of my parents. My other brothers and sisters didn’t seem to have the same problem: They came back, year after year, sneering at our prodigal sister who had abandoned us.

But I never forgot that night. And I never could stop hearing that wailing. No, because it was carried on with the rain.

By the time I was 18, I was the only child left in the house. My parents were thoroughly exhausted with raising children and were all too excited for me to leave for college. For whatever reason, I shared their enthusiasm. Something about that night so long ago had stuck with me, and I no longer felt safe in my own home. Especially when it rained.

The last time I heard the screaming was at the end of July, just before my freshman year of college. My parents were gone for the day to a wedding, leaving me alone in the creaky old farmhouse that shared all my childhood memories. It was a melancholy feeling, knowing I’d be leaving it soon, made all the worse by the gathering storm clouds shielding the sun. 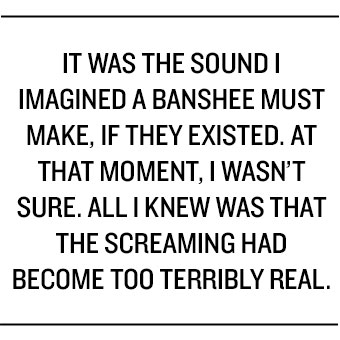 As the rain began to pour, I found my nerves shaking.

When the screaming came this time, I clutched my hands to my knees and tried to ignore it. I turned on the TV, blasting the volume until the box itself vibrated.

It would have worked, too, I’m convinced of it. But this day was different.

You see, the screaming was always distinctive, but somehow far away, as though it had been carried on the wind, sheltered by the raindrops. But this time, this time it pierced me. This time the scream was right next to my ear. It was the sound I imagined a banshee must make, if they existed. At that moment, I wasn’t sure. All I knew was that the screaming had become too terribly real.

I bolted to my feet, my heart racing hard in my chest.

Because I knew. I knew the scream was calling for me.

Before I’d made any sort of conscious decision, I’d started heading for the door, pulling on an old pair of sneakers and my letterman’s jacket. This is it, I’m going to find out what’s going on once and for all, I thought. Whatever was out there, it wanted me to come find it.

I grabbed a knife before I headed out the door, just in case. Looking back, I know I couldn’t have used it. I don’t know what I was thinking. Maybe the problem was that I wasn’t thinking at all. I was following an instinct I didn’t know I had.

And I could hear where they were coming from.

The sound was emanating from inside the grove behind our house. I found myself running through the grass, water slopping into my sneakers, my hair already drenched in the downpour. I was caught in the rain with those screams, and I was coming for them, or they were coming for me. Or maybe both? I still wasn’t sure.

I wandered through the grove for what felt like hours. It’s not a big place, but I still felt lost. I kept coming over tracks of land that I was sure I’d never seen before. Still, I followed the screaming. It tugged at my muscles, pulling me in the right direction.

Eventually, it led me to a small creek that ran behind our house.

It was a creek I knew very well, one that was much-loved in my childhood: I would wade in the waters with Carrie, our feet slipping on the cold rocks, minnows darting between our legs. It was deep and had a strong current. I’m sure our parents would have warned us to be careful if they knew we went out there. Actually, none of us kids were supposed to play in the grove at all, what with hunting being so popular in the area. But we didn’t listen – kids never do.

That day, the creek was a pock-marked mess of rain. It churned and heaved in a fury, rushing past my feet like it wanted to catch hell.

And the screaming was coming from inside it.

I inched my way closer to the creek. The wind whipped around me, sending my straggly hair sprawling across my face. I felt unsteady on my feet, so I dropped to my knees without a further thought, never mind the mud. I crawled forward and peered over the edge of the embankment.

At first, I had the craziest idea that they were fish.

It’s just that there seemed to be so many layers to the water, shining in a strange way, almost like silver. As I squinted my eyes and peered closer, I realized that these weren’t small, scaly bodies. No, they were larger, they were connected.

And suddenly, I could see. They were people.

They rushed by in the current, their mouths twisted and contorted in various shades of agony. Their weeping and wailing crashed through the air as they flew like mad down the creek. I watched their spindly hands reaching through the icy water, searching for anything, anyone.

There was one soul that had found its mark.

Her hands were twisted on a tree-root that had crept into the water. It was her scream that was the loudest, her searching eyes that called to me. Like the other souls, she had lost her color, fading into translucence in the water. But I could still see her looking towards me, screaming for me.

Still gripping the root with her left hand, she reached out to me with her right, her hand drifting towards the surface of the water. She couldn’t break it, and I found myself reaching down to pull her to safety.

It was then that my knee slipped. I started sliding down the embankment, heading straight for the strong current beneath me. My screams joined theirs and I waited for the shock of the icy water.

It would have hit me, too, had I not been holding the knife. Out of instinct, I plunged it deep into the ground. Out of luck, it held my weight and I began to scramble back up the embankment. I finally reached safety, the taste of mud heavy in my mouth, my hands clammy and freezing. I turned around one last time to look into the water.

The girl was gone. Floated away. And she had taken her screams with her.

I turned away and bolted for the house.

When my parents came home, I demanded answers. I wasn’t coherent at first: I was shouting about the rain, the screaming, the wind, the creek.

They never meant for me to find out, they said. An accident, they said. Everyone in town knew, everyone but us children. We were never supposed to know.

We were never supposed to know.

My mother cried, and so did my father.

And I just sat there.

Interestingly enough, I learned one other fact that day. Wouldn’t you like to hear it?

I don’t have five siblings.

My Cousin And I Were Hunted By Something On Our Family Farm, And I Think It’s Still Out There Somewhere

When Your Parents Are The Ones That Hurt You The Most