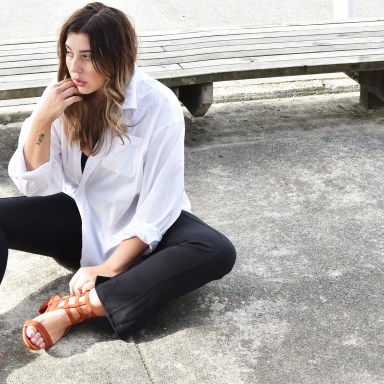 Trigger Warning: The following article discusses sensitive subjects which may be upsetting to some readers.

It wasn’t rape. But it wasn’t totally consensual either. It was somewhere in between, the grey area most women are all too (unfortunately) familiar with.

We were both foreigners in a new country, out partying. By the time I got back to his friend’s place, where he was staying, I was turned off. Why did I have sex with him? I’m not entirely sure. I guess I did that thing so many of us girls do when we’ve already gone home with a guy and aren’t actually feeling it- we just do it anyway because it’s easier than the alternative. Easier than arguing. Easier than having to fend him off. I was drunk. I was on the tail-end of a bad break-up and I was simply tired. So I tried to go with it, sex is complicated and I had led him on this far, surely it wasn’t fair of me to say no? Then he didn’t have a condom and I resorted back to ‘no’. More coercion and I found myself having unprotected sex with this stranger. It was as consensual as numb indifference can be. He was very stoned and could barely get it up. It was all utterly forgettable.

Until, of course, it wasn’t.

The next day he wouldn’t drop me off where I was staying right away like he had promised. I had to accompany him back to the bar we met so he could find his phone.

No phone. I was finally dropped off.

I carried on with my trip – flew with friends to another city. I didn’t take the morning-after pill. I didn’t even think about it. I can’t say why, I’m educated, I was newly single. I should have known better. But I didn’t. I didn’t think it could happen to me, I’m usually so safe, and this was just the one time right? Only once. I had his email address and he had started following me on Instagram; however, I never heard from him again and that was OK by me.

Less than three weeks later I was sitting in my bedroom in my parent’s house that I had just moved back into post-break-up. I was nauseous. My stomach had been upset for days and I felt simply awful. I had no energy and I was throwing up all day and night. I couldn’t leave the house. I called my friend and told her. She asked me if I was pregnant. I said I couldn’t be but I’d already gotten the pregnancy test to check. We both knew. As women intuitively know. She sat on the phone with me as I peed on the stick. There it was. As clear as day. I was pregnant.

I was scared and shocked and morose. I felt utterly alone. What was I going to do? Was it the one nightstand? Was it my ex? What do I even do in this situation? Unlike some, there was no question in my mind that I wanted an abortion. I never for a second thought it was anything more than a seed. One tiny seed. A seed that was growing inside me and I wanted to reach in and rip out myself, that very instant. It felt like torture. Like I had ruined my life. The morning sickness lasted all day, every day. The only escape I had was when fatigue would finally cause sleep.

I told Mum and together we decided to not tell Dad because he would be angry with me. Something I couldn’t quite face at the time.

I was lost and confused and alone. I spent days in my room isolated. I stopped going to my post-graduate classes and I only left the house to go to the Doctor. The Doctor said I had to make an appointment to have my stomach scanned to confirm pregnancy. I had to wait several days for that appointment. I waited alone in my room, counting down. I contacted my ex. I wanted it to be his so at least I wasn’t alone in this and I had someone to talk to. After all, he was still my best friend. When I reached out I told him flatly that it was either his or a one night stand. I said I was ill and scared. He replied that I would need to prove it was his, and if so, he would pay half of an abortion. He never asked me how I was feeling, he never even asked if I wanted an abortion, he simply told those two things. I was hurt and furious. And alone.

There was no education on what to do if you become pregnant. No section in sex-ed at school. We were taught how to put on a condom but nothing about what to do if you find yourself pregnant. I had no real idea of what I needed to do, only vaguely to start with my GP.

My friend offered to come with me to my appointments. I was so grateful to her. We sat in the waiting room watching a girl in a school uniform go in before me. I was weak from not eating. I was also terrified at 26, I couldn’t imagine how a schoolgirl felt. The ultrasound revealed I was 3 weeks pregnant. Very early, the sickness gave it away. They told me I would have to wait until 6 weeks before I could have the procedure. The idea of that was nearly unbearable. I needed this alien thing out of me.

I cried some more.

I waited for three weeks in agony. Both mentally and physically. I could barely eat and I could barely leave the house. I isolated myself further; too ashamed to see many people go to my classes or job.

A week or so before the abortion I had to go for a session with a psychologist. I had to tell them that my mental health was at risk if I was not granted this abortion. I had to sit there and tell a woman I would be suicidal if I was forced to grow a baby. I wasn’t given the right to my own autonomy – a stranger got to decide whether I would be mentally fit to have a baby. And the double-edged sword was that this time – you’re hoping they think you’re not.

When the day finally came, my mother took me. I had no idea what to expect. We sat in a waiting room with other girls and women there for the same reason. A nurse came and escorted me to a small cubicle but instead of walls it had curtains. She asked me if I wanted my Mum there. I did. I wanted her there for as much of it as she could be. I was given some drugs to start the process and soon was ushered into the surgery. I don’t remember much except there was a vacuum-like machine and they literally sucked it out of me. I felt like a slab of meat on a conveyor belt as it was all over within 20 minutes. I was sent back to my cubical to get dressed and sent on my way.

I threw up one last time in the parking lot.

Later that week the psychologist called me and told me I needed to go to counseling. Not asking if I wanted to, but demanding that I do. Leaving messages for me to book an appointment. I didn’t go. I didn’t want to talk about it. I wanted to get on with my life, create distance.

In a country like New Zealand, where we are apparently progressive – it’s dehumanizing for women to have to lie and say they are suicidal in order to be granted an abortion. To have someone sit there and assess us because we are not capable of making that decision ourselves. For years, I blocked out what happened entirely. I never thought about it and barely told anyone. I was told that people might look at me differently if I talked about it. We never told my Dad. It’s mind-blowing to think what would have happened to me if I was unlucky enough to be in a different time or country that hasn’t legalized safe abortions. The ordeal was traumatizing enough without having to hide it from my own government. The lack of education around abortions is unbelievable – even in first world countries where it’s legal. Women are demonized for it when the general public don’t even quite understand what a fetus is. We are made to feel like sluts and murderers.

I can honestly say that even though it was hard, I don’t regret the decision I made.

Currently, trying to make my way.