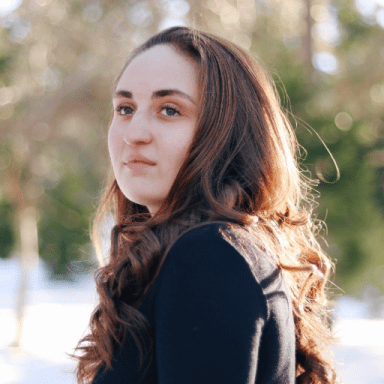 When I became a Christian, I thought all the turmoil would stop. I thought the irrational thoughts would never return and that the light at the end of the tunnel wouldn’t just be at the end anymore. I thought I’d constantly be living in the light. Man, was I wrong.

When searching for God, it’s common to want to focus on the positive and seek peace. But when the reality of our brokenness gets too heavy, all of that light we strive for becomes fainter and fainter. Peace feels impossible to find at times.

When choosing my faith, I had very little knowledge of what discoveries awaited me once I had committed to this journey. I also had no knowledge of what a ticking time bomb my mind was or is. Through a lot of trial and error, I slowly learned that the concept of religion overlooks the intricate detail and realities of what the human mind puts itself through every day.

Coming from a household with no religious background was a blessing in disguise. This allowed me to be free-spirited and find God on my terms, without anyone telling me what my journey is supposed to look like. However, when I did find God, I’ll admit that it would have been nice to have some kind of knowledge of the fine line between broken and redeemed and the harsh realities of both.

The older I get and the more I learn about the brain and how we process thoughts and emotions, the more I realize how deeply the mind chatters throughout the day. Ever since I became mature enough to recognize all my thoughts, the good and the bad, I often struggle with why that chatter in my head and my fine ability to overthink could completely take over my ability to see things as they are.

For some reason, when we feel we have lost control of our thoughts and the weight of our shattered reality presses down upon us, we become submissive to the chatter rather than the loving God who can calm the storm we create for ourselves. Now, I’ve never heard audible voices but I have processed dark thoughts. Through this, I discovered the problem with being submissive to our chatter: It becomes the force that drives us to do what we do, to choose what we react to, and to feel how we feel.

When you start to let the negative thoughts consume you, it’s like pouring lighter fluid onto a fire. It leads you to act out of character and become oblivious and inconsiderate of the people around you. The scary part is, those thoughts convince you that because of the way you’re acting, people don’t want you around. So now you’re scrambling around trying to pick up the pieces to something you’ve told yourself you’ve broken, and you end up bleeding all over the people who didn’t cut you.

Once you get to this point of panic where you feel like all you do is burden people, you come up with what seems to be the most logical yet insensitive thing to do—isolate yourself. And unfortunately, that’s exactly what I did.

I came home after a very mentally exhausting day feeling vulnerable, fragile, and weak. I laid on the floor crying and argued with my internal voice out of desperation that led me to think that the louder I cried, the quieter those thoughts would become. In reality, this only made the fire inside me bigger.

The more I fed into my desperation of internal silence, the easier it was to react externally, which led to a selfless act of rage. I could feel the anxiety and anger taking over my eyes, affecting my ability to not only see how self-destructive I was being, but also how God was strengthening me even though I was hurting.

I had completely lost control of myself, my thoughts, and my actions. I picked up an old canvas painting that had never gotten hung and started punching it with every vulnerable feeling I had in me. It felt as if the harder I punched, the more the pain would flow to my hand, rather than my head. I felt like I was opening a window and letting the bad air out that had been packed tightly in a little room for weeks.

Now, a lot of people think that believers who experience these times of weakness just pick up their bible, start praying, and everything becomes peaceful. From a religious perspective, yeah, picking up your bible and praying at that moment probably would have been a logical thing to do. But when all of those emotions fill up and change the look in your eye, you lose sight of the light that can make sense of all the emotions.

When I was finally able to calm down and separate my thoughts from my actions, I stood up and looked at the piece of art I had just ruined, and I got a sense of how still everything was around me.

I had heard this verse before, but never considered what it meant to “be still” or how one can even undertake a sense of stillness when feeling so vulnerable. In my eyes, everything was dark. I was blinded by temporary pain because my thoughts were convincing me these feelings were a permanent issue that could not be healed.

As I was laying there crying, my thoughts became very sensitive to a few things: My fan was still spinning, the birds outside my window were still chirping, the wind was still whispering through the trees. Nothing around me had changed except for my ability to be still and process my thoughts. Suddenly, I had a feeling of comfort. I thought to myself, Is this what it’s like to be still? To become humble during a storm?

I looked in the mirror and was forced to look at all the power I had to be destructive, to acknowledge how easy it can be to act out of character even when everything around me is happening exactly as it was planned to happen. The earth was still spinning, I was still breathing, and everything outside my bedroom window was still existing as it always had.

Because we live in a selfish world, it’s easy for that internal chatter to twist us up and make us do the unthinkable to either ourselves or the ones we wouldn’t dare to hurt. Behaving radically can give us a sense of control over the battles we don’t need to fight.

Being in a constant cycle of feeling like we can’t control that chatter and allowing it to affect our actions will only lead us to self-destruction. The hard part is, we’re so focused on how these emotions make us feel that we block our capacity to be still. It is no wonder that we reach a breaking point and become so mentally exhausted.

It’s important for us as humans, constantly making mistakes, to realize that when we reach that point in our lives where we feel like everything is slipping through our fingers, when we feel the need to go into a battle that’s not ours to fight, we must remember that no matter how deep we are in our faith, God will always fight for us and catch whatever it is we feel is slipping away.

From my experience, He will make the best out of our worst.