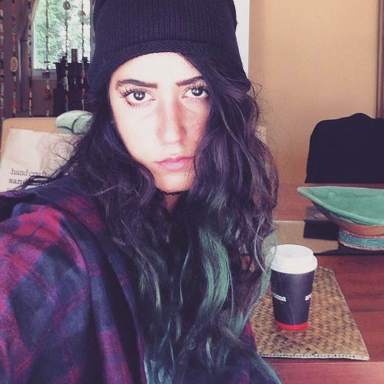 She wakes up with the sun. You’ll squint your eyes open just to see her wide awake. She checks up on all the surf reports as she rolls out of bed, tying herself into a teeny bikini. She covers her sun­kissed skin in thick white cream and knots up her glittering hair that is dry like straw.

She’ll throw you that smile, that bright white smile, and it makes it all worth it.

But don’t date a girl who surfs, even if you go with her to the beach, her eyes stay locked on the horizon. She watches the waves break and waits for the tide. She answers your questions while she looks for her peak.

She has no plans except to surf when the surf is right and she will surf until she is done. She knows disappointment and discipline, she’s learned respect and playfulness, she has battled and befriended every challenge on her path.

She will surf the morning away in a sea of surfer guys until she breathes her last salty breath and gives into her last wave. She has fought for her place in the water and spreads smiles while she does it.

Don’t date a girl who surfs, she knows what she wants and knows how to get it.

Panting and pulling at her bikini ties, she finally washes ashore but now’s not your moment. It’s time for her to eat before sleeping the afternoon sun away to recharge for the next session.

Don’t date a girl who surfs, she’ll chase a good wave even if it’s hours away. She gets a call or sees a picture and she loads up the car. She is committed and loving but she will answer every call from the swell.

She’s the girl who has more bikinis than underwear and rocks a fresh face with matching bruises and tan­lines. She has no time for hairbrushes and big fancy meals. She can get glammed up but she’ll have nothing to wear.

If you date a girl who surfs and you keep her from the surf, she will dream her nights away, on wave after wave. She will flick on all the newest surf documentaries and pick up a skateboard.

If you date a girl who surfs and you keep her from the surf, she will dream of the day when she can surf day after day.

So, don’t date a girl who surfs if you can’t handle the sea. She is the ocean, and not for you to tame. She flows with the weather, follows the moon, she thinks with her soul and dances on water.

You’ll tease her about sharks and urchins and crocs. She’ll look around and say “nah.” as she leaves you behind. You’ll ask her to need you, to show fear and be soft. She’ll wax up her board and leave you her footprints to watch.

Just don’t date a girl who surfs if you want to change that she surfs.

It’s not that she surfs, this girl who surfs, it is that she is the ocean.

No matter where she is or what she does, she will be free. She is always in motion, passionate and swirling, she is the ocean in everything she does.

That’s why you will date a girl who surfs, you see the depths in her eyes.

When you date a girl who surfs, dance with her in the wild, open your passions and let your moonshine glow. She is the ocean, you are her tides.

I spend my days on a tropical beach writing in a notebook in between waves.