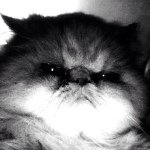 People always say “enjoy your twenties!” but no one ever talks about how terrible they can be.

My twenties felt like being in a boat without a paddle — in the middle of the ocean, in a storm. Sure, it was exciting! But it was also terrifying. I was constantly reeling; trying to be an adult, working my ass off at underpaid jobs, going on horrible dates, all the while partying way too much. Whenever I felt I had finally achieved some balance or direction, I was swept up or tipped over again and again. The only thing that kept it all together was my amazing group of friends.

After graduating with a film degree, I moved to the “big city” of Toronto. Full of creativity and ambition, I had no doubt that great things were in my future. I just had no clue what those great things were, or how I was going to get to them.

Fast forward to 2014. I was twenty-five and living with my best friend. Both of us had quit crappy jobs (barista and brand ambassador), to go back to school, and had since found ourselves working new jobs that were equally unsatisfying. Then Broad City came out, and it hit us like a bolt of lightning.

We had both watched the Youtube series and thought it was weird and awesome. But seeing these characters on network television, and knowing that the real-life Abbi and Ilana were thriving, was validating.

The show itself was validating too. It was the first time I had ever seen such an accurate reflection of my life on screen. These girls were messy. They were trying new things. They were trying to be politically active and socially conscious, and asking important questions like, “Do you ever get hair from your head stuck in your butt crack in the shower?”

Abbi and Ilana became my friends, and like all good friends, they are mirrors to my life. From the epic “Started from the Bottom” cold open when Abbi gets a cheque for $8,000, to the unbridled joy Ilana experiences from an expensive washing machine, Broad City perfectly portrays what it feels like to struggle through your twenties. Five seasons later, they continue to show me how to celebrate my inner kween and get back up after my numerous failures.

In honor of Broad City’s series finale, here are 5 lessons from Broad City that absolutely got me through my 20s.

1. There is no rulebook to dating.

A lot of gender stereotypes get thrown around on the battlefield of love. One of the most common is that women are desperate to be in relationships, while men prefer to play the field. Broad City turns this blatant mass generalization on its head when both Lincoln and Trey are the ones who want monogamous relationships, while Ilana’s mojo can’t be tamed, and Abbi is only interested in Trey as a sex partner. Where shows like Sex and the City and even Girls made a spectacle of non-traditional sex and romance, Broad City normalizes it.

Abbi and Ilana try, try, again, and fail, fail, again. But they always get back up.

Abbi is the “responsible” one, and even she has lost two jobs over the course of the show. Both times she legitimately messed up. The first time, she killed her boss’s cat. That’s fair. The second time, Abbi commandeered a window display at Anthropologie in the middle of the night. Hoping her superiors would recognize her true artistry, she took a risk, and it didn’t pay off. But instead of moping, Abbi takes her lifetime ban from Anthropologie in stride and moves on to bigger and better things.

The moral of the story is, you don’t have to be perfect at everything. I can guarantee you won’t be! But you are still allowed to put yourself out there to figure it out. I’ve tried so many jobs that I think I can do, only to find out that I wasn’t cut out for it, or I really didn’t like it.

The days of joining a company and “climbing the ladder” until retirement are over. 25% of millennials will have had at least 5 different jobs by the time they are 35. Let’s face it, we have our whole lives to work, so why waste time doing something that is a constant struggle? Embrace your experience and learn from your failures. What matters is that you give it your best shot. And probably stay away from bestiality on your workplace’s Instagram.

3. Ask and you shall receive

Although you may fail, it’s still ok to be clear about what you want! Speaking up and “leaning in” is the best way to learn, and it’s the only way other people can help you! It took Abbi the whole first season to make her trainer aspirations known to Trey at Soulstice. The thing she had been fretting about all season turned out to be a simple thing.

Throughout my twenties, I was filled with ambition coupled with self-doubt (ok I still am!). While I wanted others to think I was competent and knowledgeable, fake it til you make it doesn’t really help when what you need to do is learn. Being vulnerable is scary, but once you learn to embrace it, you’ll realize it can be a strength. Broad City itself is a product of vulnerability. The web series has its rough spots, but it showed the world what they wanted and the right people focused on their capabilities, not their weaknesses.

4. Everyone is a mess at some point.

Abbi and Ilana deteriorate into utter messes on the regular: Abbi spending over a grand at Whole Foods while high on pain meds, Ilana testing the limits of her shellfish allergy, the two of them being kicked off a flight to Israel. These are just a few examples.

In the latest season, Abbi’s new girlfriend breaks up with her, saying Abbi has a lot of growing up to do. While Abbi and Ilana are appalled by this claim, there is a definite contrast between their lives and the life of Abbi’s doctor girlfriend. But of course, we don’t think any less of them for it.

Everyone grows at their own pace, and there is no scale to measure your progress on the road to becoming “an adult.” Broad City never fails to show us the other side. In season one, Abbi’s baby-toting friend from college shames her for still smoking weed, but then downs a glass of wine with a prescription pill. We all have problems.

Broad City shows that no matter where you are on the “adult” scale, self-improvement is a constant journey. Sure, Abbi and Ilana are messes sometimes, but we always know they will get better.

Above all else, Abbi and Ilana’s friendship comes first, stressing that platonic friendships are no less important than romantic relationships. Especially in your 20s, romance comes and goes, but friends are always there.

And it’s important to note that Broad City goes beyond “female friendship.” The show takes care to show that men are not just the “other,” but can also be great friends and allies. The male characters in Broad City are diverse, complex, and sensitive. Even when Ilana breaks up with Lincoln, it is very clear that their friendship still exists. They have mutual respect for each other that goes beyond monogamy or romance.

Friends are like really good mirrors, with great lighting. Good friends make us believe the best in ourselves while showing us our flaws in the gentlest way possible. Like when Jaime told Ilana to take off the culturally appropriative “Latina” earrings. As the series ends, we all know this is not the end of Abbi and Ilana’s friendship, but it’s a perfect place to end the story as they confidently step into the next phase of their lives.

Every week Abbi and Ilana figured out a little more about who they are as adults, only to be reminded they have a long way to go. And although this is true of every decade, your 20s are when you realize that being an adult is not some finish line to cross, but an ongoing series of misadventures. These well-intentioned, ambitious, sometimes naïve, girls, don’t have it all together, but they are doing their damned best. Thank you Abbi and Ilana. Everyone who has been touched by the show will forever take risks, make mistakes, and embrace their inner goddess.

…Now what should I watch to get me through my 30s?