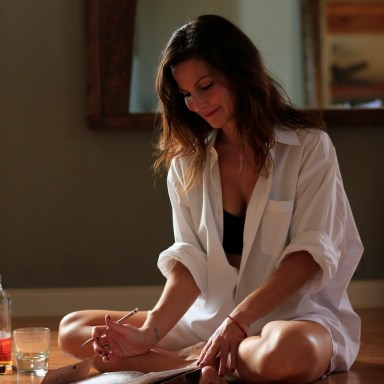 No one told me what to expect when I got divorced, I just did it; I trusted my instinct.

No one told me that when I got divorced it would feel like I divorced my children, too. I had the gut-wrenching foresight that we’d have to divvy up parenting time, but no one told me what that’s really like. No one told me that I’d develop premature empty nest syndrome from the abrupt transitions each week.

I became a part-time parent. I don’t want to be a part-time parent; I want to hear them get out of bed every morning, their feet scampering down the stairs and into my bed to bombard me with 20 random questions before breakfast. I want to clean up their crumbs and pick them up from school every day. I want to get annoyed and tell them to quiet down, secretly yearning for a couple days of silence.

No one told me that during their sports games (that don’t land on my parenting time), I’d stand back, feeling cold and sad amidst the cheers and parental heckling. I can’t be the mom I am when they’re with me; I become the second tier of my own volition, so I don’t cause them to feel guilty for hugging their stepmom before me. I don’t want them to have to choose.

No one prepared me for afternoon pickups. They run to me, arms outstretched with their coiffed French braids. Another woman’s fingers twisted their strands before school that day. The same hair I watched sprout from baldness, from the head I pushed out of my body.

Even though the divorce was my choice, I did not know the future I was choosing. The unraveling doesn’t happen with the stamp of the notary. Instead, it hesitantly untangles for years and years after the paperwork is finalized. And, with every milestone, with every birthday, with every holiday I am hauntingly reminded of the decision I made.

Yet, time does its job: people move on, they fall in love with someone else and as they do, they erase the life they had with you.

I can’t do that. I wish I could, but that life is a part of this life. There’s no denying when they smile, or when they laugh, I see him in their upturned lips, squinty eyes and cackles; I remember the time he and I did this or that. I feel joy and sadness simultaneously. I am confused by it; a nagging bitter-sweetness I carry in my heart. Despite that, I’ve moved on, too.

I wanted independence; I got it. I wanted to be alone; I got that.

Most of the time, I relish in it until I’m faced with the reality I try to keep at a distance: the new family, the one my babies are a part of, and I’m not. No one tells you that when you get divorced your children will become a piece of something you will never see. They will have countless moments witnessed by another woman’s eyes, clapping hands and inviting arms. You will smile and be happy for them when they share those hidden times, but there will always be this tugging, this nausea, this bubbling anger that those eyes, those hands and those arms aren’t yours.

No one tells you that even if you have a loving divorce and initially both of you want to maintain a cohesive friendship for the children, that desire diminishes with time. It’s an inevitable extinguishing of camaraderie when one or both of you fall in love with someone else. It becomes too complicated, the distance increases to protect the boundaries. Hugs become handshakes and handshakes turn to waves from across the room.

No one tells you about the dreams at night. The sleep-induced scenarios; a subconscious opportunity to get out all of the resentment, the pain, and the questioning: Did I make the right decision? Even though when you wake, you remember you did the right thing.

No one tells you that you may move houses, change cars and open a new bank account, but you can’t change the past or its accompaniment to the present.

No one warns you that on an unassuming Wednesday afternoon, your daughter (sweaty and exhilarated from winning the second basketball game of the season) will hand you the new medical insurance card her dad gave her to give to you, since you’re usually the one to take them to appointments. This card doesn’t just have their names on it; it has hers, too. You have to carry all of them with you, because, that’s life now. You smile at your daughter and say thank you, hiding the card behind your Costco membership card, so you don’t have to be reminded. Now, your wallet feels like it’s carrying an extra 130 pounds.

No one tells you these things.

No one tells you what it’s like to come home without the smells of dinner prepared, lights on, and noise from the TV that you can’t wait to turn down. No one tells you that you’ll crave too much noise.

No one tells you that you’ll journey through a blackness you didn’t know existed. No one tells you that the grief you endure from your divorce will pail in comparison to the heartbreak you will experience from the short-lived loves who will vanish as quickly as they appeared. You will find yourself picking your heart off the ground frequently; it will become your new normal.

No one tells you how many hours you will waste on online dating sites without success. No one tells you that you will meet someone who could be the one, yet due to timing, you will once again have to tend to another broken heart.

You chose to mend the brokenness in yourself so that you could be a better person and a better parent.

No one tells you that you will always have a pulse of doubt, because, you’re human, because, you care, because, you’re a mother. You’re their mother and you want them to be happy. And sometimes, mothers have to make excruciating decisions in order to create happiness for their family.

One day, that’s what I will tell them.