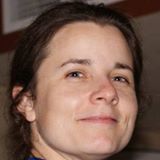 The other day I had to sign a co-worker’s greeting card. And, as always happens to me on such occasions, I felt a wave of anxiety wash over me.

Every time I have to sign a card, there is always the possibility that something could go horribly wrong. What if I make a mistake? It’s in pen, so I can’t just erase my mistake like I could if it were in pencil. But who signs greeting cards in pencil? It’s just not done. So I have to write in pen, and if I make a mistake, I really only have three options.

1. I can cross out my mistake, leaving behind an ugly mess that the card’s receiver and, if it’s a group card, everyone who signs the card after me will see and judge me for.

2. I can white out the mistake, but let’s face it, that doesn’t fool anyone and basically leaves me in the same predicament I would be in if I had just crossed out what I wrote. But then, in addition to people judging me for being messy, I will also have people judging me for living in the past and being old enough to think that white out is actually still a thing.

3. I can buy a new card. I’ve done this more times than I care to admit just so that the person receiving the card doesn’t think I’m the type of messy slob who crosses out mistakes on greeting cards.

There is also the possibility that I could say something inappropriate. And before you get the wrong idea, I’m not the kind of person who goes around writing inappropriate things on people’s greeting cards. At least, not intentionally. But sometimes it just happens. Jokes misfire. And sometimes I misjudge the nature of my relationship to the card receiver. Maybe I sign off with “love” when a “your friend” might have been more appropriate. Maybe I write way too much or maybe I write too little. Or maybe my handwriting is too messy for the person to read. Or maybe it’s too neat. Like serial killer neat. Is it possible to get arrested for writing too neatly in a card? I think it might be.

For me, the best strategy has always been to write my message down as quickly as possible and then pass the card along before I have the chance to second guess myself. It’s just easier that way.

Then, later, when the receiver is reading the card, I’ll just crouch down in the corner and avoid any and all eye contact, just in case the message and/or the handwriting is bad.

I really wish I had some better strategies on how to overcome the debilitating anxiety that results when I have to sign a greeting card for someone, but that’s really the best I’ve got. The greeting card equivalent of holding my breath, closing my eyes and waiting for it all to end.

So the next time you have to sign a greeting card, if you’re like me and you start to feel that familiar panic feeling settle over you, please know that you’re not alone and that the feeling will soon pass you just have to get through it.