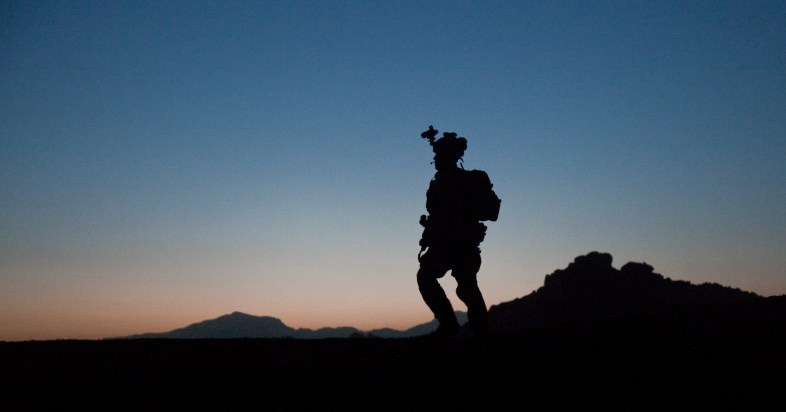 There are some things about the deployment experience that will cause a veteran to look off into the distance as he quietly remembers those days in vivid detail. There other are things that he will totally forget until something random sparks his memory and causes him to shake his head at the silliness of it all. This is a list dedicated to those little nuances about being deployed that you can’t experience in the real world.

1. The Smell of Iraq

One of the most significant moments a soldier has is when he gets his first nose full of the thick Iraqi air. It’s a smell that’s nearly impossible to find anywhere else in the world. A combination of burned garbage, desert heat spoiling everything, spilled sewage, and the Cradle of Civilization getting old and senile.

An off-brand energy drink that came to be the go-to caffeine infusion for many a troop before a mission. Got the call to go hit an objective? As you head toward the ready room, you’ll always make to sure to take a quick stop at the MWR (Morale, Welfare, Recreation) facility in order to grab one or four 6-ounce cans and put them in your cargo pockets. You never know if this is going to be a simple three-hour mission or an all-nighter. Best to carry a full battle load.

3. Pirated Movies From the Bazaar

Through the generations, boredom has always been a major enemy for the man on the ground to fight off. With the nonexistent copyright laws of the Middle East, American troops have found themselves able to procure full series of their favorite TV shows for only a few bucks thanks to enterprising locals eager to make a semi-honest buck. Whole squads and sections will partake in marathon viewings of The OC, Scrubs, Lost, and It’s Always Sunny in Philadelphia. They’ll form educated and fully developed opinions and theories on the show’s characters. It becomes a huge annoyance to get called up for a mission in the middle of a particularly juicy episode.

You’re en route to a mission in a helicopter or a Stryker. Those Rip-Its you drank are going right through you, and you’re not even close to getting to your objective. Since you ain’t no cherry, you came prepared for this event. You take out the Gatorade bottle that also doubles as your spitter. You unbutton the front of your pants, slightly hunch over, shove your dick in the bottle, and take a piss that fills it to the top. You seal the top. As you get on target, you toss it into pile of garbage on the side of the road. There’s an off chance that a local kid will think it’s just yellow Gatorade and drink it.

5. Care Packages Filled With Useless Shit No One Wants

Teaching a rather insightful lesson of good intentions does not always equal good execution, the MWR facilities will at times be packed with care packages from well-intentioned people eager to get rid of their useless shit. The occasional care package will have goodies such as fun-sized Snickers, Hot Cheetos, Gatorade powder packs, and other shit you actually want. Others will contain generic Halloween candy, pocket Bibles, crappy disposable Bic razor blades, some cheap electronic mini-game that breaks five minutes after you start playing it, and a coupon book that expired six months ago.

A good way for a kindergarten teacher to fulfill her patriotic duty and kill an hour of class time while she nurses her hangover is to have her students draw and write up cards in crayon to send to GIs overseas. The GIs will receive a crude drawing of stick figure soldiers shooting at shit and tanks that also have wings while shooting out flames and random stars plastered throughout with captions such as “Tank U for my Fredum Solgier, pleeze don’t lose yor legs,” or “Kill people with towels on their heads. USA!”

7. Rushing To The Chow Hall After A Mission

“Fuck, I’m starving. If this mission isn’t over soon, there is no way we are going to make it back in time for mid-rats. Fuck, today is Mexican Monday. My favorite!” many a Joe has thought to himself while on target. Chow is always on a soldier’s mind. In fact, having hot chow is one of life’s pleasures he’d never willingly miss. Since this is the Global War on Terrorism, there is a surprising amount of food variety cooked by cheap Filipino and Ethiopian labor.

“Holy shit, we have five minutes before chow closes,” Joe will announce to his buddies as they get back to the compound. Covered in sweat, dirt, and mud, the whole platoon will rush to the chow hall to ensure they don’t have to wait until breakfast to get their next meal.

Just because you aren’t getting any pussy doesn’t mean you won’t see females. If fact, you’ll see them throughout the installation doing various jobs. You’ll see the occasional prize specimen of femininity, but more often you’ll see chicks you wouldn’t fuck with your buddy’s dick. A couple of months of not having any sexual contact with females will have you creating elaborate fantasies about that one Air Force E-6 you always see at the chow hall with the buck teeth, horrible acne, and a totally flat chest. Yet she does have a big ass that even a military uniform can’t hide. Oh, what you wouldn’t give to have those cellulite-covered ass cheeks bouncing off your dick.

10. Overhearing Your Buddy Argue With Their Significant Other On The Phone

“You’re a fucking stupid cunt. I’m going to fucking kill you and that motherfucker when I get back home,” you’ll casually overhear one of your buddies say to his significant other as you use an Army computer to Facebook-stalk chicks you used to like in high school. Since you’re doing some rather important stuff for national security, all forms of communication you have with the rest of the world are being monitored. This means that there is very little privacy when it comes to telephone conversations that everyone in the room can hear.

11. The Smell of the Locals

The locals have a uniquely foul body odor to them. Whether it’s because they live in a shit hole and can’t shower regularly, their diet, or other social/economical factors that we don’t understand, there is no denying it. You can smell a local from ten to fifteen feet away. Wearing leather gloves is mandatory on missions, so it helps out when you have to handle and move a PUC (Person Under Control) from point A to B. Their smell will funk up your gloves for a day or two.

There are many feral dogs of nearly any kind of breed you can think of roaming the streets of Iraq. They’ll travel in packs digging through rubble and garbage looking for something to eat. You’ll see little Yorkshire Terriers who answered the call of the wild running alongside German Shepherds and Labrador Retrievers. Most of the dogs are not pure breeds and are so deeply intermixed that you can’t even begin to guess what type of breed they are. The dogs will usually avoid American troops, making them smarter than your average terrorist.

Read this: The Division of Generation Y
Read this: 3 Signs A Woman Is A Dependopotamus
Read this: Jumping Out Of Airplanes: How It’s Really Like
Afghanistan America Global War on Terror GWOT Iraq Iraq War Iraqi people Memories military US Air Force US Army US Marine Corps US Military US Navy War War in Afghanistan

Veteran Suicides And War: Here’s How We Should Do It Differently Next Time

Where Were My Harlots?