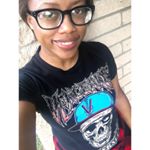 I never had a father growing up. My mom raised my brother and I. I can count on both hands how many times I have seen the man that walked out on my life. His name isn’t on my birth certificate. I don’t share his last name.

One of the few memories I have of him is a painful memory. I was 13. I was in a hospital sitting with my mom. He was across from us. I was there to get a blood test to prove I was his daughter because he didn’t want to pay child support. I was crying. Tears fell because this man did not want to acknowledge I was his child…and because I have a phobia of needles.

I call my father a “sperm donor” because, to me, that’s all he did – donated sperm to create me. I, sometimes, call him by his given name. Calling him my father or my dad would be giving him too much credit for something he never was to me. To me, he’s just my life giver.

I have only received one thing from him in my life – a small Houston Rockets cheerleader teddy bear. I remember that day. I wouldn’t get out of my mom’s car to see him. I was eight. I was eight and I didn’t want to hug him. I accepted the bear and now it’s buried deep in a box of memories that I can’t even be bothered to find.

Father’s Day has always been a weird day for me. It’s not a big deal to me. It’s just another day. I never celebrated it. I’ve only gotten a card for my granddad but that’s about it. I go on about my day.

The Fresh Prince of Bel-Air episode where Will Smith’s dad finally decides to make an appearance in his life always comes to mind. The last few moments of the episode has resonated with me for years and the last line he cries to Uncle Phil, “how come he don’t want me, man” always sticks to my mind. I’ve realized that he’s missed out on so much in my life and that’s his fault.

I’ve been stuck with emotional pain for years until I realized that everything his fault. I have graduated college without him. I have started a photography business with him. I have done so many great things without him. I no longer need him in my life.

I'm a metalhead finding her way.