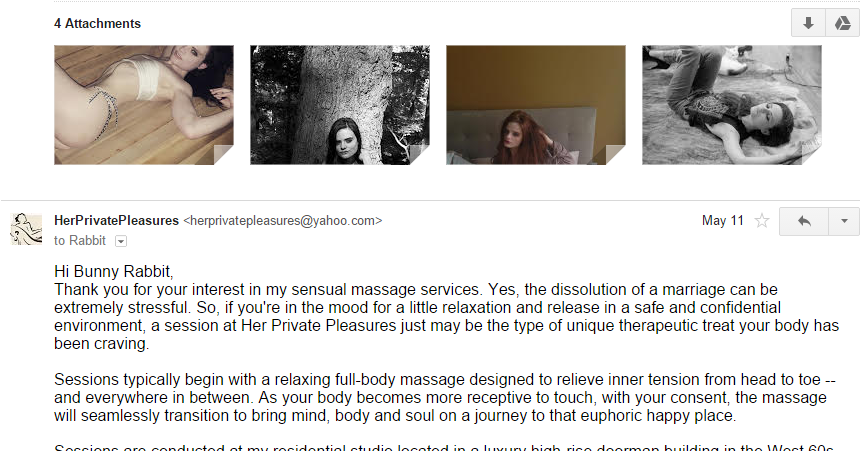 It started on a highway in rural Kentucky. We passed an adult superstore in the middle of a cornfield, the kind with a retro name like “The Jewel Box” or “Pure Romance,” I can’t remember which.

It was the sort of place whose signage captured my gaze as a child, that time when, even before I could read, I knew that the pink cursive and silhouetted figures referred to me. This particular sex shop promised “Live Booth Girls.” A smaller sign below it offered “Bait and Tackle.”

I was with my boyfriend. I had taken him home to meet my parents. It’s a test for any relationship, and it became clear ours was unraveling.

We weren’t yet talking about it. Instead, we were skimming around the surface of our undoing with small conversation.

“Have you ever been to one of those… the live booth girls?” I asked him.

“I’m jealous,” I said, almost surprised by my response. “Like, there is just nothing like that for me to experience. There’s no female equivalent. You know. I can be a live booth girl but I can’t, as a straight woman, buy that experience.”

We were silent for a moment.

“You’re right,” he said in the backwoods accent of my hometown, a thing we’d been mimicking in some attempt to bond. “Women can’t buy sex… but ya’ll sure do pay for it.”

Our relationship was coming apart and at the center sat this simple truth: I wanted to have sex and he didn’t.

This story could be about how common it all is — how the combined forces of routine, expectation, and time divorce love from sex. But that’s not what this is about.

“Why don’t you grow up and take care of your own sexual needs,” said my boyfriend, when I expressed a want to explore a deeper sexual intimacy with him.

And so this is a story about buying sex as a woman.

The man claims to have perfected a surefire female orgasm technique, making him something of a best kept Manhattan secret, or so say the dozens of reviews left on his website, all of them glowing about the $50 session conducted from Dr. M’s “home studio.” Sessions book in advance, and in order to get a spot a woman must send an application with a photo of her face and body along with her age, height, and weight.

Two hours after I submitted my application, I received a reply. He would be able to see me. There are no photos of Dr. M online but he’s a self-described  5’8, fit, mid-forties business professional with a warm demeanor.

When he called to confirm, I put the phone on speaker so my friend could hear.

“He sounds like he’s reading from a cue-card,” I said.

“He sounds like he lives at the bottom of a well,” she said.

An hour before my appointment found me chewing up a Xanax, trying to kill the crippling waves of anxiety.

I called some men I know because this is what I do when I’m emotionally uncomfortable.

“I mean, there is always anxiety in buying sex,” said one of them. “That moment of waking up is just terrifying. I wanna say, like, ‘what’s the worst thing that could happen if you go’ but I guess as a woman… well… ”

Waiting for Dr. M on a bench in the park, I realize the extent of my lack of discrimination. I mentally compromise my standards with each dull middle-aged man in wrap-around sunglasses and a polo tee passing by. I think probably it would be fine. I could do it, I think, as long as the façade of the masseuse fantasy was intact. As long as he was relatively charming. Which is probably how I feel about any man that I want something from… and I’ve always thought a girl should take full advantage of every man she meets.

It would turn out that Dr. M was sort of cute. Mid-forties, clean cut if not a bit square looking, brown hair, nice sparkly eyes. Friendly.

I change into a towel and when I emerge, I find repetitive “soothing” music playing from a nearby desktop computer. I am glad to see we are keeping up something of a spa fantasy.

I lay face down on the table. “Do you get massages often?” he asks and I sort of shrug, noting that his hands are not those of a skilled massage therapist but rather those of a seasoned back-rubber.

“Right there,” I directed. “That’s, like, the clitoris of my back.” The doctor murmured seriously.

As he worked his way to my thighs, I let my legs splay wider. His move was to massage along the inner thigh and let a hand brush against my labia ever so lightly. There was a lot of languid tracing, many feather-soft movements before finally using pressure with his whole hand, pressing at the clit.

Then there was more teasing, alternating between softness and direct pressure, moving between rubbing and thrusting, using two hands, cold drips from a bottle of Astro Glide.

I let myself fall into the sensation, vaguely aware I was slightly humping the massage table as I throw a hand toward Dr. M’s leg, and mechanically find his hard-on, huge, through his cargo shorts.

The night before I had gone out thinking I might find fresh fantasy material for my massage session, but the offerings at Williamsburg bars were bleak. It was always the same dull types: the attractive but shallow photographer with a man-bun, the groovy bartender with a neck tat and nothing to say, the uptight punk guy, the avid rock-climber keen to explain either spirituality or atheism, the cute guy who seems super gay but is clearly hitting on you, which is confusing until you realize he uses ‘friendship’ to make up for penis size insecurity.

It all bored me. The mere thought of going home with one of them to have a perfunctory sex with a condom, sex that was only about the act of fucking, was beyond depressing.

I walked home alone and only then did I find anything close to spurring a fantasy. Sitting on the stoop I smoked a cigarette with one of the Puerto Rican kids, a skinny boy with perpetual facial scrapes who tells me I am beautiful and then grabs his erection.“Look what you’ve done to me,” he moans, both of us knowing that I won’t sleep with him.

Maybe all fantasy was about a tease.

Lying on Dr. M’s massage table, I’m immersed enough that I don’t need any specific fantasy to come. Just being in this strange man’s apartment, getting touched while mindlessly staring at the painting of an American flag on his wall, aware that I was paying for his touch was enough.

When I come, it’s lying on my back, eyes closed, to a gentle clitoral orgasm. I realized afterward that I should have asked for more pressure, the way I know I like it, but in the moment, I had worried about messing with his “expert method”— maybe he knew best.

After I come, he focuses on trying to give me a vaginal orgasm, but just as I begin to feel it build, my moans rippling as the feeling pools, he shushes me. He tells me that he has neighbors and I feel self-conscious, unsure how to disconnect the orgasm from its sound.

I’ve only recently learned to orgasm from fucking and perhaps it’s this jejune state, but I’ve not yet taught myself how to feel OK afterward, how to not psychically unravel.

The trick of being able to orgasm while fucking was, for me, emotional. It was a self-unlocking. It was layers diminishing. It was animal thrusting, my screams growing more vile and obscene as I sunk internally to some root of lust, a melancholy, a damp terror that consumed me in spasms and screams that rose uncontrollably like a pre-language prayer, mouth and legs opening to its solstice, to an octave of sheer pleasure. It was being fucked to derangement.

They were orgasms that left me groundless. I felt sensitive, too open, too airy. I hated thinking that I was reliant on the man who gave them to me. And I hated it when he accused me of being too much, of needing too much, of feeling too much.

As a teenager, I expected my first orgasm to come from a man. I waited for a boyfriend —a guy I would let possess me — to show me how to get off. But each time I was unsure. What was it supposed to feel like? How would I know when I was close?

What I had forgotten was that I knew pleasure. At age 12, before any man ever looked at me as a woman, I would wake to orgasm: a stirring, one thigh against the other, a motion of turning inward, an orgasm from keeping the legs pressed together, from a body in continuous contact with itself. I could come like this, without knowing what coming was, for a few years.

Then I forgot about it as teenage sexuality became a reality, as its system of first, second, third and home bases and its counting of notches caused me anxiety. I felt intimidated about what to do with a penis, but god did I want to be touched.

Dr. M gently wipes the coconut oil and lube from my body and I quickly dress in the bathroom.

“So I was in a hurry on the way here and I need to get some cash from an ATM. Can we go to one or can I just, like, Paypal or Venmo you?” I ask.

Was this me learning to grow up and take care of my own sexual needs?

The boyfriend I brought home to meet my parents, the one from whom I’m unravelling, once told me a joke he heard from a stand-up comedian: That it’s easy for women to turn down sex because we are offered it constantly. Any man who is vaguely nice or helpful to a woman is just offering her dick. That was the joke: That for women, sex is free.

Dick is free, joked this man who wouldn’t have sex with me.

Dick is free… and yet I felt so goddamned trapped by it.