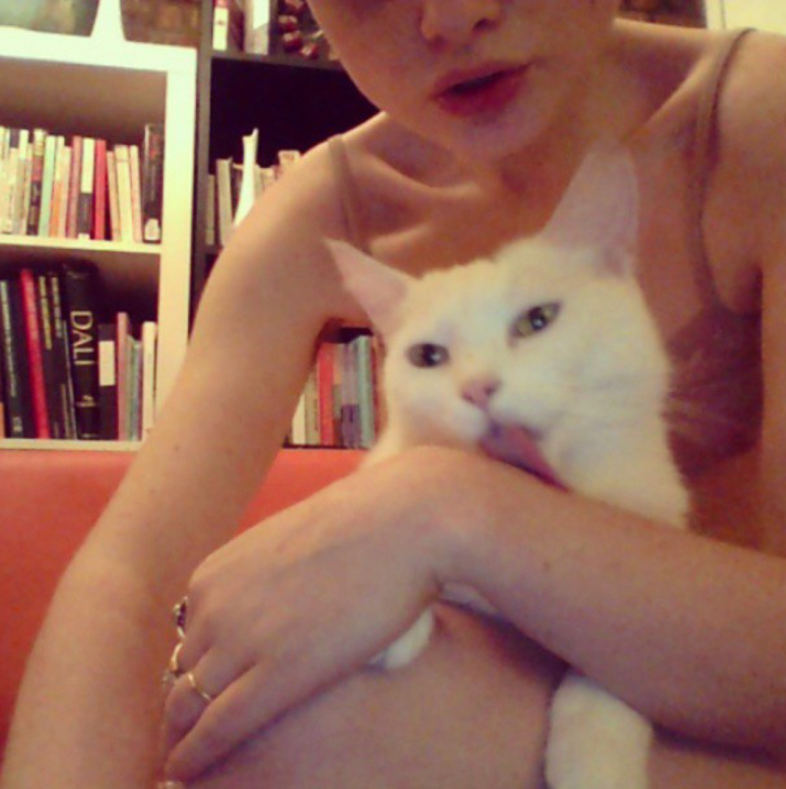 Near the end of our six year marriage, my husband uttered the post-coital words that no one wants to hear. “You’re just no fun anymore,” he said. We were both naked and one of us was scrolling through our iPhone… the disentranced modern cigarette after sex.

“You know… there’s a word for what you are,” countered my soon to be ex: “You’re a pillow queen.”

Pillow-queen. It was a term I’d heard in passing, an image I’d loosely associated with a certain lazy vanilla femininity, imagining some lesser goddess draped across a chaise lounge, whining for various grapes to be dropped in her mouth; a greek deity played by Miss Piggy. It wasn’t a compliment.

But if there’s ever a lesson worth learning, it’s to not be so gender-essentializing about any such things.

“The male pillow queen is totally a thing,” confirmed my friend Chelsea, a fellow sex-writer who once took a public vow to never excuse bad sex.

Perhaps it was a duality… there were two types of men: Those who, like my ex, were action-oriented, collecting female orgasms like merit-badges, men whose objective was to lick, prod, and poke at your every crevice, adding to a “skills summary” of some invisible sexual resume.

Then there were men whose goals were more aimless. Men who laid back and assumed you would figure it out. The dick was enough.

“I went to bed with this piano player,” explained Chelsea, “and it was like doing it with a sex doll. He was utterly limp except for his penis…he just laid there, murmuring, and sort of lethargically running his hands over my body. He didn’t even like to kiss. It was wretched. I left mid-bonk.”

Leaving halfway through sex shows great style so I congratulated my friend… but still I was haunted. I needed to confide something in her.

What if sometimes the dick was enough?

I was still sharing a bed with my husband when I met someone else…. an unmarried (underemployed) academic-type whose dick I could make hard, very hard, by ignoring it and instead squeezing his nipple between my thumb and ring-finger with particular pressure.

I would push him to the bed and dance around his pleasure until I could no longer take the tease, soaking, hair-whipping, riding into a myriad of orgasms that left his sheets stained with girl.

I was brimming with it: passion, obsession, all of the highs an extramarital affair can buy. And he… he was playing pillow queen.

“Well it makes sense that you would go for the opposite,” said Chelsea: “Up is down. Down is up. Cats are sleeping with dogs. After-all, isn’t it more about having a range of play in common?”

I agreed but felt paranoid. What, who, was this man? What made a pillow king?

In the name of real sex journalism, I checked in with Dr. Carol Queen, the sexologist I typically ring when playing “reporter”… even if she was especially fitting for this tale.

Dr. Queen understood what I was saying:

“Male sexual socialization can be pretty limiting for men regarding their pleasure. They have to get it up, keep it up, focus on her without always knowing what that means. A man who can lie back, relax and accept attention and pleasure can discover new dimensions to his sexuality… maybe even his personality.”

A real “enlightened” male. Of course, there were caveats:

“We’re talking about a submissive nature but a ‘do me’ attitude can also be selfish and self absorbed. Frankly, the guy who’d rather get head all night is a common variety of pillow king… and he might be a little uncomfortable with sex, finding it easier to let things happen to him than to take a lot of responsibility for driving. A lot of these guys might be inexperienced. ”

In the spirit of gossip, I invited a bevy of female friends to a bar so we could drink $14 glasses of chardonnay and talk endlessly about my boy problems.

Over drinks, I presented Dr. Queen’s input in its most dire iteration: Maybe the pillow type just isn’t confident in his abilities, maybe he’s the sort who touches at the clitoris in a confused way. Maybe he’s lost in himself, falling into a Narcissus-like internal sex gaze.

Leila, a young staffer at a popular blog who happens to look like a model was more hopeful:

“Maybe there is something sweet about it,” she offered. “Like they don’t want to assume total knowledge of the elusive female orgasm… I mean, it’s nice to meet a guy with fancy moves and all but sometimes the ‘eager to please’ guys can be really annoying.”

I nodded. What woman hadn’t swatted a roaming hand away from sensitive areas, trying to politely move in a way that suggests “more like this” or just “please stop touching my anus.”

“There’s a sense of entitlement with those eager guys,” my friend continued. “Like, he’s so sure he knows what women want… at the cost of what she actively says what she prefers.”

I picked up my phone but consciously put it down. I wanted to text him but then I was always texting first. I picked up my wine glass.

“Maybe it’s like figuring out who gets which side of the bed…” I offered. “I want dibs on being the one who texts first… dibs on stealing his side of the bed sometimes… just because.”

“I don’t know,” chimed Gaby, a vlogger visiting from Los Angeles, where this is an acceptable job title.

She explained that the term pillow queen, came from the lesbian community where it’s used to describe a “stone femme”, a girl who will receive oral sex but not give it. A greedy bottom.

And, on cue, Gaby led into a story about herself:

“I had a boyfriend who never went down on me and after awhile I realized… he was just lazy. I mean we could’ve gone on like that, me riding his face when I wanted oral…. but I realized the sex was indicative of a larger laziness. This guy was in his mid-thirties, he was unemployed and just he had an overall lack of excitement about life. Nothing was going to change. And he wasn’t going to just start going down on me.”

In the name of avoiding co-dependence, I tried to forget about my guy and line up a few dates.

Over dinner with a sport-coat who worked in finance, I brought up the concept of the male pillow queen.

“I blame feminism for these guys,” he said and then steered me toward some of his budget-conscious recommendations on the menu.

My date went on, jabbering about his own sexual prowess and I wondered if I should’ve engaged him on the feminist comment. I could’ve played nice and asked whether the sexual revolution hadn’t freed us women at all but just saddled us with further roles to fill… but he was still talking and there wasn’t much space for me to say anything.

My date liked the pillow queen topic. He explained that he was an “action oriented” guy. He claimed to specialize in multiple orgasms although his post-dinner move suggested otherwise. Illiterate to my cues, he darted a tongue into my mouth while a depressing finger probed my underwear. It was the most dull domination… an expectation of immediate submission without any sense of playfulness or report.

In a cab I stuffed my mouth with gum, trying to drown out his tongue’s residue of cheap chianti and soured laundry.

And then I went to a bar… because the only way to wash out one bad date is with another.

With a vodka martini lemon twist, I nestled into a booth with two bearded men who’d recently moved to Brooklyn from Ohio… as one does when one is a young man with hand tattoos and dreams of making it in graphic design.

I began to interview them about the pillow queen.

“I had a girlfriend like that,” said one of them. “She couldn’t be on top because of some medical issues with her neck… but I started to feel suspicious, I mean she went on the elliptical two times a week… she even once went horseback riding. I felt like I was an employer giving her workman’s comp for an injury she’d totally faked.”

But what about the male pillow queen, I implored.

“Well which are you?” one bearded graphic designer asked the other.

Both of their cheeks were pinkening.

I went home with one of them because, in my drunken state, it seemed easier to hitch a ride to Central Brooklyn than to walk the four blocks home… where I was still living with my husband.

At his place, we were kissing and then it wasn’t long until he was laid back on the sofa, unzipped to reveal the most cliched “tell” of the male pillow queen: “Wow… you weren’t even going to tell me you had this unusually large cock?” I asked, in earnest, stopping to sip my drink.

It was, in my opinion, a very fine instrument: thick all the way through, firm and velvety to the touch, perfectly long.

I got on top of him, our kissing out of sync, and tried to drum up some lust for this clearly superior equipment. But as I fit the thing inside of me and began to writhe over his motionless body I realized I felt nothing. So I stopped. “I think I have to go,” I said.

In the cab, looking at the city sparkle over the Williamsburg bridge, my cliche-ending was obvious: Up is down, down is up. It was only ever about chemistry and passion and their inevitable fade.

I looked at my phone but it was dead. I missed my pillow prince.

The next morning, I called him, too hungover to care about making him chase me. “I’m writing this story about the pillow queen,” I explained. “But a male version of a pillow queen. Can you think of any cultural examples?”

He found his copy of the Iliad and read aloud a passage where Aphrodite saves Paris from dying in battle: “Aphrodite caught Paris easily, since she was divine, and wrapped him in a thick mist and set him down again in his own perfumed bed-chamber.”

“Cute,” I said, and then I told him I was coming over.

If any greek goddess had mind-blowing, sheet-soaking orgasms… it was surely Aphrodite and of course that was the take-away of all this nonsense anyway: It didn’t matter really which type of guy they were so long as they could make me come.