It started the way these sorts of fantasies do: innocently enough,or at least with a certain naivete.

I had clicked on a New York Post gossip piece about an upcoming sex party thrown by a female “friend of Kate Middleton.” The Post provided paparazzi photos of the princess and the sex party entrepreneur paling around daytime London.

I called the promoters and weaseled my way into receiving a press pass, then hung up, pleased.

I began imagining all sorts of things. Masked politicians and their tall brunette dates. A flock of models, male and female, shyly touching on MDMA, a cloud of gently pulsing bodies, fingers outstretched beckoning me to join.

A few gloating hours passed before I realized that I should probably ask my boyfriend if he wanted to come. We were six months in and recently exclusive… which was my idea. But to explain the slow party invitation, I was new to monogamy… having just left an open marriage.

Certainly, I would be jealous if he went to such an event alone.

“Ugh, do we have to?” said my boyfriend, over the phone.

“Well… decide so I can tell the promoters… do you want to come or not?”

There were strict party guidelines: no phones, masks are mandatory. Men are not allowed to enter without a date. Men can not approach women or generally speak unless spoken to. Only the “kittens” can break the rules.

In a cab, I nibble on my boyfriend’s earlobe. “I don’t want you to fuck anyone else,” I whisper. “But I feel bad putting limits on you.”

“Is that how it is going to happen!” he teases. “Haven’t you learned anything about how fantasy works?” 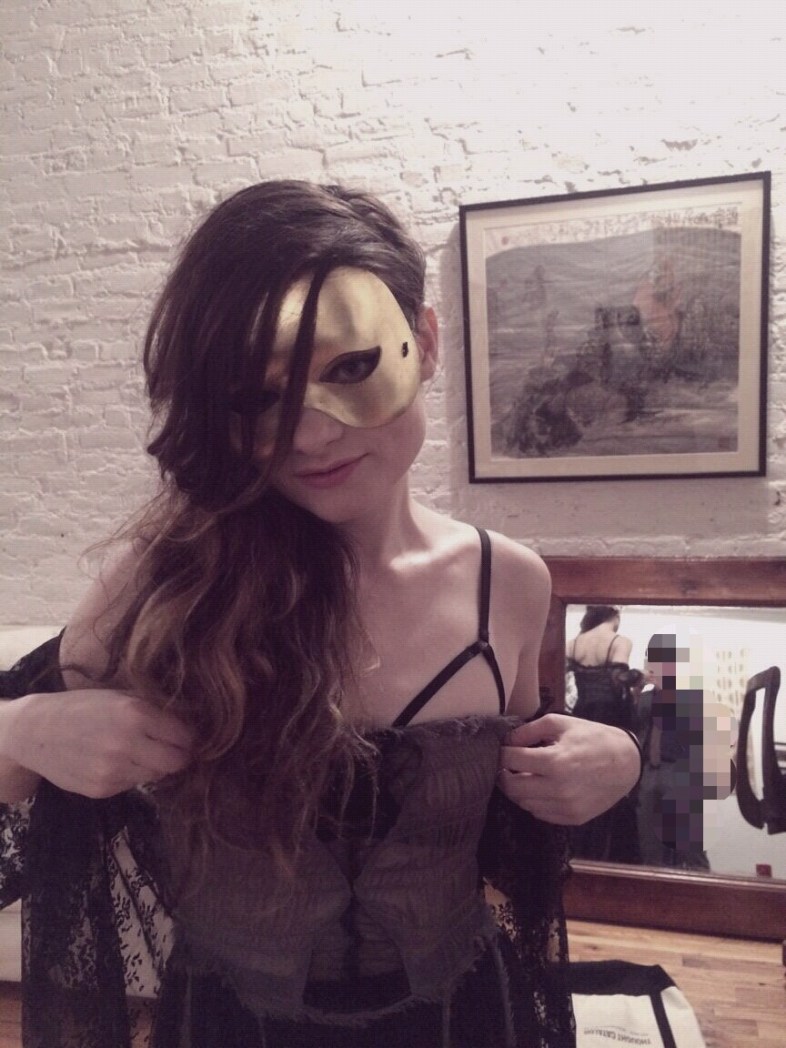 It’s cold and raining but the entrance to the party is lined with couples smoking cigarettes, masks dangling in free hands.

“How is it?” I ask a blonde who doesn’t answer, looking away to glare at her date.

Inside, the attendees, sport-coat clad fraternity alumni and their female counterparts, stand around fussing with their masks, taking them off and putting them back on. Everyone looks slightly confused.

“It feels like a bar mitzvah,” my boyfriend says.

Eyes Wide Shut, it was not.

“Well at least we didn’t pay $250 for tickets,” says Chelsea, a friend and fellow sex-writer who was also here to report on the event.

I offer to buy Chelsea a champagne but she is on a boring cleanse. “I’m dying. I can’t have liquor or coffee. I actually drank a grain-based coffee substitute before coming. Coffee without coffee. It was like drinking coffee’s ghost.”

I suggest that getting laid might help curb the caffeine cravings… but so far there wasn’t a very diverse pool of dick to choose from: all of the men were of the same sort, a type whose Tinder profile probably lists their alma mater, business accomplishments and passion for Soul Cycle.

“These aren’t people I want to talk to… let alone suckle,” says Chelsea.

As always, the men were worse than the women… though perhaps not by much. The Post had promised leggy models and female British investment bankers in La Perla lingerie…. and here they were: a type-A parade of expensive footwear and bad taste.

Breaking the rules, a man with an audio recorder approaches us and explains he is a journalist.

“Oh no… we are journalists too.”

“Are you getting good quotes?”

“I don’t do interviews,” says Chelsea. “My journalism is purely solipsistic.”

“How nihilistic!” he says.

“When are people going to start fucking?” I say.

My boyfriend points to a woman receiving oral sex on the pool table. She lays, motionless, silent as stone. Like sex without sex. As if she were receiving cunninlingus’ ghost.

I go to make a round but as soon as I enter the party’s traffic there is a man blocking my way.

He invites me to sit with his group, a bevy of married couples from New Jersey, a whole sofa full of jewelry-clad busty wives, their husbands sitting across from them on stray chairs, absorbed in their women-watching.

Immediately, the wives pull me into their nest, and ask a series of blunt questions, their bangle bracelets clacking as they chatter over one another.

I take the spotlight happily, using the opportunity to talk about myself… as I always do.

My story: I was married too. Seven years. For half of them, we were non-monogamous… it was my idea.

There were ground-rules but of course I broke them continually and then ultimately by falling in love with someone else.

I had fantasized about it happening so many times. Maybe that’s why I was able to leave my husband so quickly… three months after meeting my boyfriend.

“I mean… in non-monogamy don’t we always imagine that someone could lure us away?” I ask the wives. “Isn’t that both the biggest fear and fantasy?”

“And so… the guy you had the affair with…” asks one of the wives. “This is the guy you are with now? Your boyfriend?”

“Stay away from my husband!” says one of the women.

The wives turn toward each other, having decided about me.

I watch as a petite woman fucks in time to the beat, some far-flung part of my brain imagining this as a competition that I hope she wins.

Next to her, two models give each other lapdances while a small audience of men watch.

She sees us and waves, crawling to the corner of the bed. “Yeah, I’m here with this couple but I have sex with them all of the time… I was hoping to hook up with someone new,” she says. “But there aren’t any hot guys here.”

“There aren’t any single ones,” says Chelsea.

“It looked like a lot of bad sex,” says Chelsea as we head to the bar, “And you know how I feel about bad sex.”

Here, the only desperation was to perform “we went to a sex party,” which was a real commitment… like dancing while sober.

“I sort of like bad sex,” I argue, “Maybe sometimes you have to have bad sex… in order to have better sex??”

My friend shakes her head. My boyfriend shrugs.

“The problem is that no one is swapping,” says the girl next to us, a tall brunette dressed as Audrey Hepburn in Breakfast at Tiffany’s, vape for a cigarette holder. “Everyone here is very beginner level. When my boyfriend and I have friends over, they often take their clothes off as soon as they enter our house!”

Chelsea decides to try her luck at roaming the party. “Go on you kids,” she urges my boyfriend and I, waving toward the back room, “Have sex!”

“Are you two together?” asks the woman I sit down next to, as we say hello.

I nod, putting a hand on my boyfriend’s leg.

We watch as the couple begins to fuck without foreplay, working through a myriad of positions to the beat of high energy dance music, giving each pose about 45 seconds before moving on, like in one of those exercise videos that promise results in ten minutes.

“Ass injections,” says the woman next to me, nodding toward all of the skinny girls with bubblelicious butts. “I work in plastic surgery. They all have fake asses these days.”

My hopes at enacting my fantasy had begun to dry, but stubbornly, I wasn’t ready to give up. I stroke the inside of my boyfriend’s thigh, grazing my hand against his dick a few times, just long enough to confirm he isn’t going to get hard.

The DJ queues the “Jock Jams” hit, “Ya’ll Ready For This?”

We watch as a fully clothed couple station themselves in front of a mirror to dance awkwardly, joyfully watching themselves as they grind ass-to-groin.

“If this is what the ego-attachment to sex looks like… then I’m never having sex again,” my boyfriend says.

“Who did she hook up with?”

“That male journalist who tried to interview us.”

“How long has this been going on for?” she asks in horror.

The man’s sugar baby date was determined. She continued to tug mercilessly at his half-hard prick and as far as I know, eternally, as we took this as our cue to leave.

In bed, my boyfriend and I roll over to our respective sides, fuck-less. I was worried that he’d meant it when he said he never wanted to have sex again… mostly because I felt that way too. Watching the sex, I had been surprised to experience an utter lack of feeling in my groin.

The problem, in sex parties, in all of hooking-up and dating always comes down to the people involved.

They’re the “creatives” with dull and uninteresting jobs, the “entrepreneurs” who bore you with endless stories about their travel and college-buddies. People who, should they corner you in a bar, keep you hostage with talk about a recent hot yoga retreat or the web series they hope to write one day.

How, in a city of eight million, was it so hard to find someone you could stand being around?

I lie awake as my boyfriend begins to sleep, his breath slowing, the inhale drifting to a snore.

But I guess I got what I wanted. So now what?

Read this: What Do Women Really Think About Sex? 12 Brutally Honest Dispatches From A Woman
Read this: 18 Girls On The Nickname They Wish Guys Used Instead of ‘Babe’
Read this: 16 Guys Reveal The One Thing They Will Never Tell Their Girlfriend (For Her Own Good)
Best Of Thought Catalog Journalism Killing Kittens Love & Sex Sex parties Sex writing

10 Brutal (But Necessary) Lessons I Learned By 30