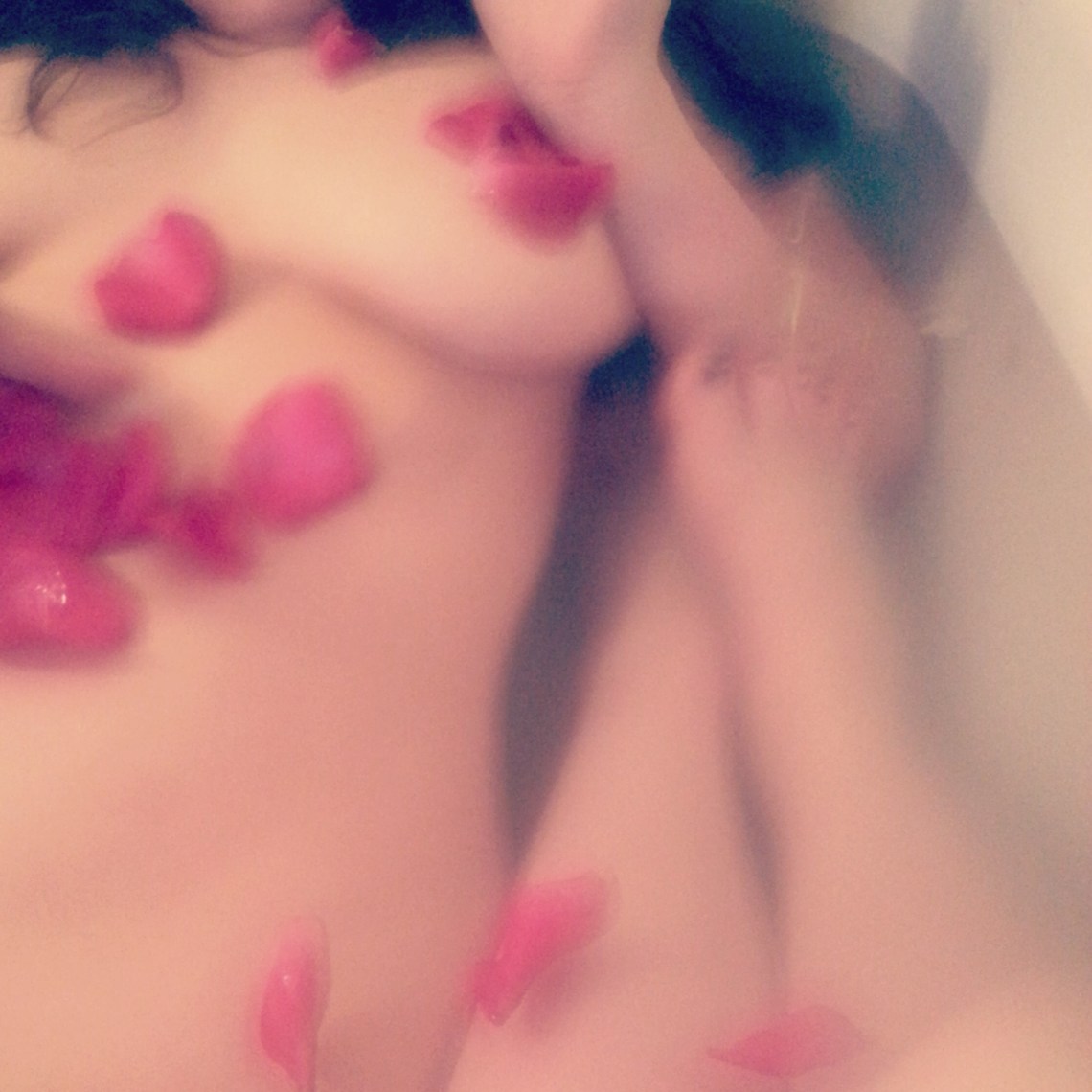 It is a depressing realization to come to: The fact that, despite my best efforts, I am straight and will remain in this heterosexual quagmire, needing, lusting, wanting men for the rest of my life.

There was a time when I thought of my sexuality as fluid, a thing that sloshed around the Kinsey scale, a panoply of desire open to inspiration or whim. But the more sex I had… the more hardened my preferences became: I set Tinder to “bisexual” and realized I was swiping away from female faces, almost automatically. I tried with women, feeling guilty, but the conversation inevitably trailed off. I didn’t feel the internal quickening, the thrill that I got while bantering with men.

Still, I can recall my first crush on a woman. I was four years old and she was my Sunday School teacher. She had sandy hair: a buttermilk princess with miracle-bra cleavage. I was a child and therefore neutral, that’s what Freud told me. And neutral equals male. So, I was male and my fantasy was simple: I wanted to take her in my arms and kiss her like people did on television… kiss her like the man it still seemed I could grow up to be.

As I approached adolescence, I tried to fight it. Awake at night, I focused on the terror I felt as I saw it begin in the girls around me. I didn’t want it to happen, the blood and hair and hormones, but it was becoming undeniable. I woke to the strange stirring in my thighs, one leg rubbing the other pleasurably as I held onto sleep, dreaming only about boys and their slumped postures, their small animal mouths.

The way to handle such problems is to find someone else who understands them. Another girl, one you almost seem to recognize upon first glance, a best friend you have often imagined. A girl you could talk to for hours, entering a flowing  speed of vocal continuousness as if talking were chanting, the brain tidying its recesses, summoning something divine.

Two girls together are never alone.

At first, with each new female friend, it was as though I already knew her intimately, we seemed to share a certain essence, a disposition… but I needed more, I wanted to hear all of her stories at once, to memorize her many looks from every angle.

The closer I got, the more confusing she became. I felt distrustful, needing to see her without make-up, without a bra, happy to note the rotting tampons in the bathroom bin or the apple-y smell of underwear she hadn’t changed for days. The closer I got the more she began to adopt a certain feminine remoteness that I, myself, had been stripped of, needing always to be nearer to the intimacy of her life, to find something to inspire further tenderness.

They were friendships that began in a furious all-consuming passion and then ended with a similar bang.

Perhaps this was why I taught myself at an early age to adopt a certain conservatism with men, deciding not to chase after the boys who inspired something wild and possessive in me, knowing I couldn’t handle such complete longing, wanting a body undivided from me, to touch, to feel the other at every instant. No. I was sensible enough to date the dull, nice men who grounded me without ever inspiring a vulnerability which whispers: I am yours, I am yours, I am yours.

But enough of this.

How did the story with “Marianne” begin? This story about how I had sex with Marianne…?

Being a girl who likes to party, to try new things, I have — of course —hooked up with women. At first it was exciting to make-out on the dancefloor, to receive drunk oral sex while applying lip gloss in the mirror… but I began to feel burdened by the mundane regularity of the Girl-on-Girl fantasy, by the bisexual’s task of having to make out with a drunk friend… to put up with affected moaning and groping in order to share a bump of coke in the bathroom stall.

Marianne was not the first girl that I had sex with but she would perhaps be the last.

We met at a point when I felt trapped by life, I know that. Unsure of what or who had become my captor… but here was a girl to fill the void. Two girls were surely less alone than one.

I know that it built up for weeks, in a phase of self-induced insomnia, cutting vegetables directly on the kitchen countertop, googling things like: “At what stage does friendship translate into sexual love?”

With Marianne, I was old enough to know better. I didn’t need to dance around this circle again.

In the upward hours of insomnia, I google: “How to not be obsessed with someone”.. and then I decide to take action.

“You’re my first friend with a real apartment,” Marianne said, wandering through the place I shared with my husband.

Marianne, like all the girls I’ve loved intensely, was a few years younger than me… just enough for it to be noticeable.

I watched as she picked up items left on the coffee table and pulled books from the shelf.

With Marianne, with all of the younger girls, I was keen to lend things, clothing especially : silk robes, dresses, jewelry. I wanted to see her in my things, as though I were seeing an alternate version of myself.

In the bedroom, where I suggested we would be more comfortable, I reach to brush a piece of hair from Marianne’s face, and she jumps, surprised.

“Do you want more to drink?” I ask, passing her a glass of lambrusco. She takes it clumsily, and some wine spills on the sheets.

I go to retrieve a towel and tinker with iTunes, closing the “How to Give Cunninglingus” article on AskMen.com, having memorized its advice to lick in long rhythmic strokes, like licking an ice cream cone.

I hover above Marianne, rubbing the stain, and she rubs her eyes, “I want to find a before and after weight loss picture of a cat,” she yawns. “Do you think that exists?”

All I can think is that I need to say the line I had decided to say before she arrived.

I knew how I would do it: I would move quickly, tie Marianne to the bed by her wrists and ankles,  and blindfold her so she wouldn’t sense that I am smaller than her, not sense any lack of agility or purpose, as I keep a direction, a move toward some end.

Finally I manage it, sounding unnatural: “Can I give you a massage?” 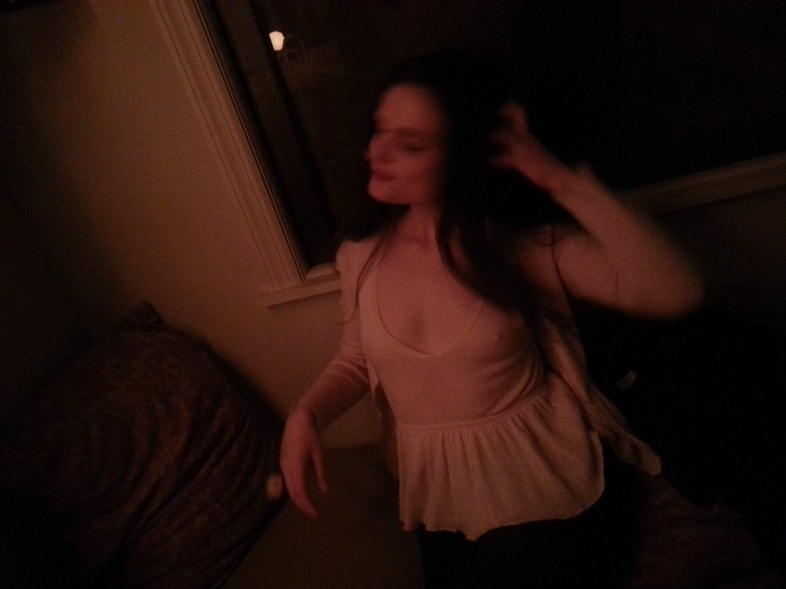 To have a fantasy is a dangerous thing. Because suddenly, it is happening.

I pretend to know what I am doing, a swarm of insects fluttering  as I ask “is this OK?”… and use the feel of a thigh sliding inside of a thigh to find a rhythm. I suck her bottom lip and roam her body, my mouth rested on vulvar ledge, my fingers slowly sliding in and out in rhythm to contractions the licking inspired.

Pleasure made her open wider and as Marianne’s moans grew more melodious and rippling, I threw myself on her, parting her legs to slide, desperately rubbing. Girl against girl.

I turn on the video-mode of my phone and direct her: Tell the camera you’re just a Slut.

I smack her ass repeatedly,to the mental time of a jump rope song. I am quick to again put my tongue between her legs again and she continually convulses without coming, a nine volt battery, viscous liquid flowing from all corners.

I light a cigarette and ash it on her tits. She wriggles as I tease the lit tip along her pubic hair, but then she yells out in pain– yells out that I’ve burnt her clit.

I help Marianne sit up. I remove the blindfold and we look at each other, ripped momentarily from the bowels of sex, slick with its esophagus.

She murmurs at the lambrusco and I tilt the bottle back for her, accidentally tipping so steeply that she chokes. Her gag reflex brings the drink back up and she apologizes with low frenetic laughter, “This is so embarrassing,” she says, saliva-vomit webbing her breasts.

Sitting in the patio of a restaurant, Marianne is elegantly disheveled, buttering a piece of bread, her mouth the mouth of several soft animals.

I want to feel the way Marianne looks but my mind is like the hard clack of silverware on plates, the cacophony of glasses, the low hum of multiple conversations.

We drink more wine and begin to talk, as we always do, about men.

I nod, adopting the role of the older friend, the sage wife.

I begin to tell Marianne how, as a child, I sometimes heard the internal narration of an adult man who talked in long monologues describing situations I wasn’t in or mundane tasks I wasn’t doing. The adult male voice was uncontrollable but mostly I was able to ignore it… tune him out like a television I wasn’t watching.

“Maybe it was a past life,” Marianne suggests. Maybe as a child I had been closer to this past life… but over the years had learned to shut him out.

I wondered if my husband was home yet. He would probably be arriving now as he always did, his posture erect and self sufficient, heading to the bedroom to neatly remove and fold his clothes, not even noticing the ozone of sex. 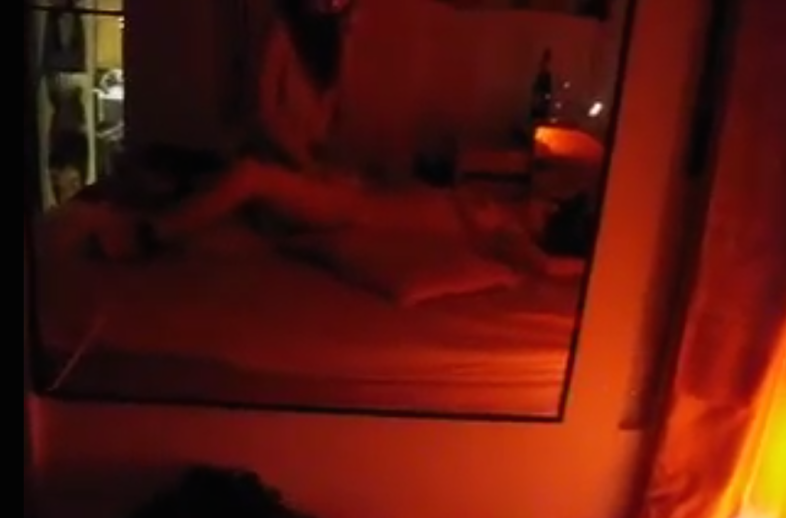 “It’s too bad you and I couldn’t get married.. “ I say, looking for something to break the silence as I do the math to leave a tip, paying for dinner with a credit card I’ve never seen a statement for.