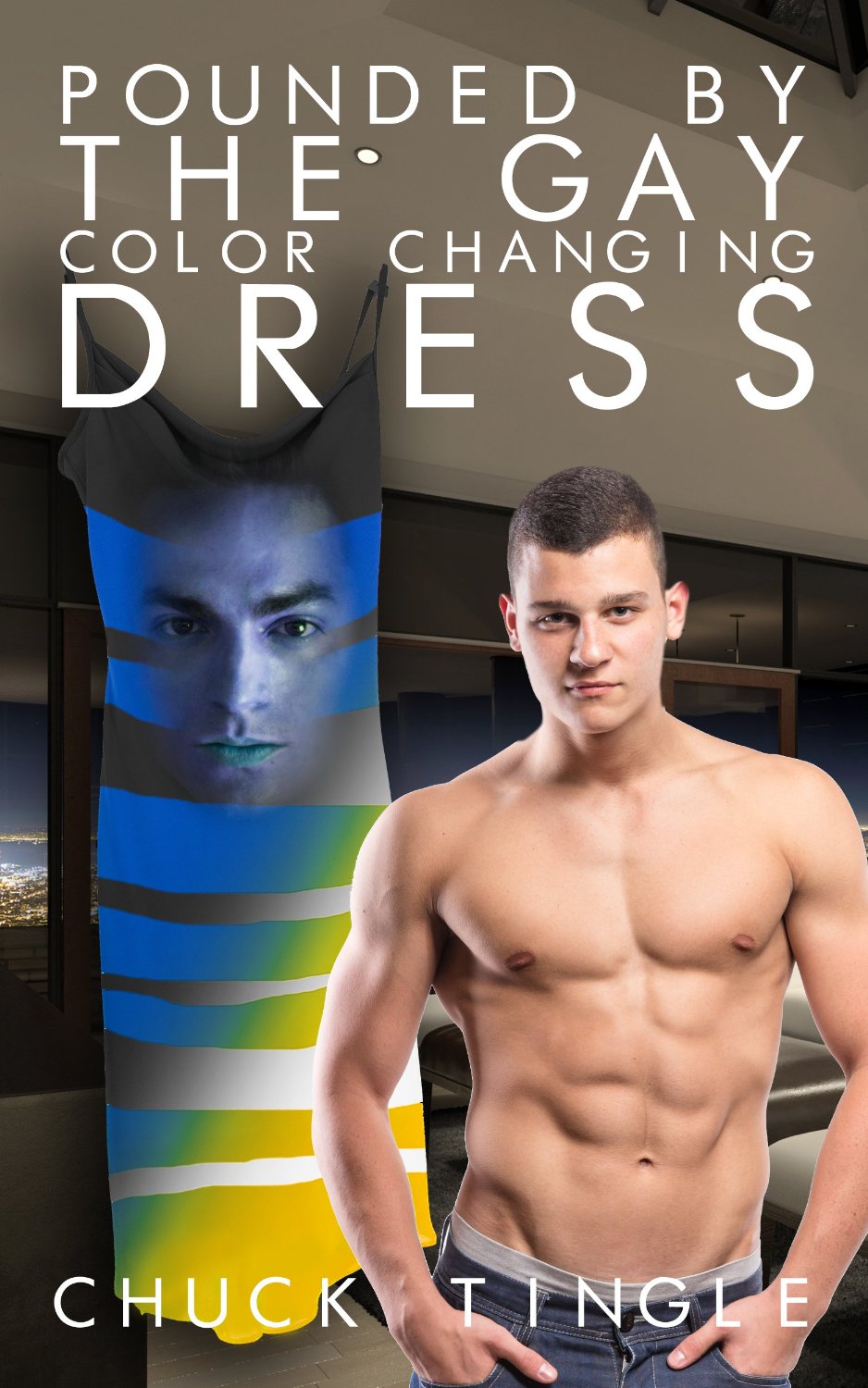 Just when you think there’s nothing more that can be written about The Dress (yes, I’m talking about the one that still looks white and gold to me when most of the world concedes that it’s blue and black), except maybe about the man who tattooed it onto his leg, here comes the magic of self-publishing and noted new comedic gay erotica author Chuck Tingle with an ebook called Pounded By The Gay Color Changing Dress (not to be confused with his other releases such as Pounded by President Bigfoot and Pounded By The Gay Unicorn Football Squad).

If it sounds unreal that The Dress could be an active participant in a steamy, very explicit story, Tingle makes sure to set the scene perfectly. When his bartender friend suggests he can work his college boy good looks and “get a nice job and go live up on the cliffs,” our narrator Kent is hearing none of it. “You know I couldn’t do that,” he tells the bartender. “What comes next, marry a hot gay doctor? Adopt two kids? I need both worlds in my life, a little love and a little danger. I need someone who makes a lot of gold, but isn’t afraid to get black and blue when push comes to shove.”

A little later, he reveals, “I’m holding out for someone who walks the line; rugged and together, arrogant and loving, lowbrow and highbrow at the same time.” Magically, when he exits the bar, he sees a “living, floating dress” exit too, and lucky for him, it’s a “homosexual piece of women’s attire.” Here’s Tingle’s initial description: “The dress is stunning, with a chiseled face and ripped abs across his blue and black front, and the confident manner of his float gives him a manly aggression.”

The dress manages to rescue the narrator from an aggressive drunk, then amusingly pulls the don’t-you-know-who-I-am card. The dress not only has a name, Channing, but a motorcycle on which he whisks Kent home. During the ride, we find out, of course, that Channing is a billionaire dress. And, naturally, he has a huge cock to match Kent’s.

If you can use your imagination enough to appreciate a line like, “I reach up to help him along, cradling the living dress’s balls as I service him,” you should check it out. It’s honestly not any more absurd than any other aspect of Dress-mania.

Mind you, I’m reading this in the week following assigning my LitReactor erotica writing students to write a humorous erotica story. Tingle’s dress tale is completely ridiculous, including a surprise twist about the dress’s true nature at the end, but it’s also brilliant in its way. It manages to laugh at our hysterics about the dress, the over-the-top nature of so much modern erotica, and what sex is really all about in a mere 4,400 words. Well done, Mr. Tingle. I applaud your ingenuity, which extends to your entire branding, as noted by an astute Facebook comment who wrote of his profile photo, “You are so beautiful it makes sense that you’re a stock photo model.”

Needless to say, Tingle acted extremely fast to lay claim to being what I believe is the first The Dress erotica, telling Buzzfeed that when he heard about the dress, “It got me thinking about the perfect day with a good friend, maybe kissing maybe not but mostly about how the perfect friend is a little nice and a little mean. Made me think that the dress was a good idea for a tingler because it was two things at once like the perfect friend.”

I hope Tingle is laughing all the way to the bank.

The Morning-After Nightmare: 30 People Describe What Happened After Waking Up From A One-Night Stand

When He’s All Talk And No Action