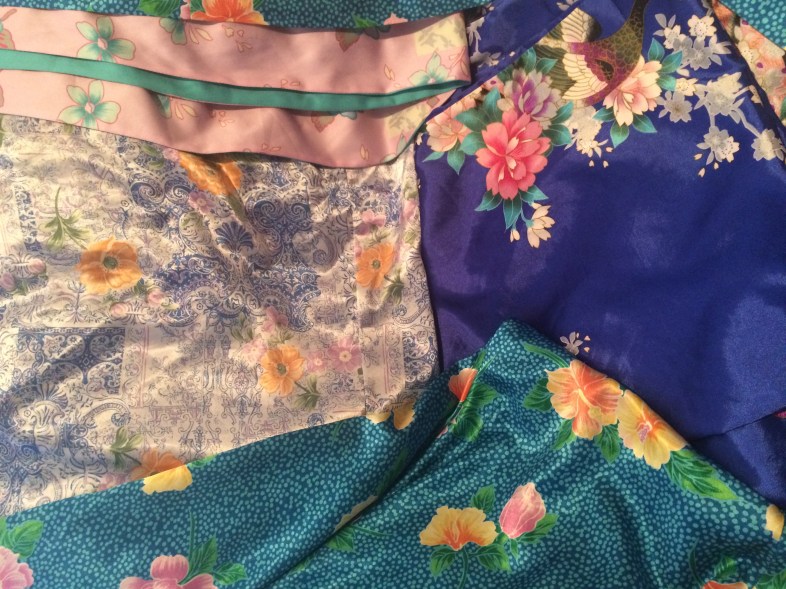 I can hardly sleep anymore, now that my 100% silk pillowcase is on its way to my 100% cotton bed. I used to relish my bed; now I toss and turn in my sleep, physically repulsed by the dehydrated cotton that ensconces me. How had this never occurred to me before? I had always thought my friends with silk sheets were just being overly and unnecessarily indulgent.

Aside for Silk Road Palace, the all-you-can-drink sake and wine spot that I grew up precariously close to, I’ve kept silk at arm’s length for much of my life. For one, I like to rough up my clothes. I don’t enjoy restrictions; just to be safe, I like to know that I can inhale a plate of French fries regardless of what I happen to be wearing. But I had also never entertained the idea of silk as a pajama option either — of indulging in my nighttime wardrobe. It had always been precisely because of their unbecomingness that they were my PJs and not, say, my work clothes. T-shirts, hand-me-downs, and Hanukkah gifts I would have otherwise discarded have always just been thrown into the pajama pile.

Like a distinctly college fling that only comes alive during basement frat parties, the clothes I had been wearing to bed my whole life could only possibly be worn under the guise of nighttime. Like the person with whom you engaged in your distinctly college fling, whose redeeming qualities only seemed to emerge under the influence of four beers, my pink leopard print pajama pants only felt like a great idea when hidden under my covers.

Well recently that’s changed. I’ve stopped only putting care and effort into my clothes that see the light of day, I’ve learned to take pleasure in a self-indulgent skincare regimen, and I’ve started collecting silk robes.

Sure it has its downsides. The other day, for instance, in full robe garb, I opened my door to a friend who immediately exclaimed, “You look like my grandma!” But it has its upsides too. As a fabric, silk is so much more than just regal looking.

1. It keeps moisture in tact.

This is in part due to the composition of silk; the tightly-woven, soft fibers apparently work to keep the skin moisturized. But there’s another, more scientific explanation too. Silkworms — which are really just silk moths at their larval or caterpillar stage — produce silk in their salivary glands, eventually forming its cocoon. And it’s the cocoon that’s composed of two highly beneficial proteins: fibroin and sericin. According to a Swiss study in the Cosmetics and Toiletries Journal, sericin adheres to keratin — the protein in our skin and hair. It forms a visible “homogenous protective film,” which in turn helps keep moisture in tact.

Silk, and especially Dermasilk — a certain strain of silk that’s free of sericin — is also touted for its antimicrobial properties. Which, it’s been argued, help to reduce the accumulation of moisture and, as such, serve as great shields against yeast infections. So there — finally a reason to get those silk monogrammed undies you’ve always wanted.

Silk is made naturally and thus does not require potentially harmful or toxic chemicals like other fabrics we use. Its natural makeup contains properties that allow it to repel dust mites as well as fight mold and mildew, and is therefore naturally hypoallergenic. The most hypoallergenic, in fact, of all fabrics.

The problem with cotton is that it bunches up and pulls. Unlike silk, cotton doesn’t slide, and so has adverse effects on our hair while we’re sleeping, bunching it into knots and the like. Cotton is also far more static-y than silk, which only facilitates the pulling and tugging.

5. Sleep on silk and you’ll have less wrinkles.

Just as cotton pulls at the hair, it also pulls at the skin (and that’s never good). Silk not only reduces wrinkles by helping the skin to retain its moisture, but it also does so by not bunching up and ultimately leaving you with those awesome sleep wrinkles.

It’s no secret that silk has natural antioxidant powers too. Again, it goes back to the silkworm, which feeds on antioxidant-heavy mulberry leaves. Mulberries are immensely more rich in antioxidants, in fact, than most other fruits, according to a test at Brunswick Laboratories. Perhaps that’s why sericin has apparently been shown to “suppress in vitro lipid peroxidation” and “inhibit tyrosinase activity.”

And unlike some other fabrics that enable the production of heat, silk doesn’t. It simply preserves your heat in the cold, yet allows the skin to breathe and stay cool in warmer weather.