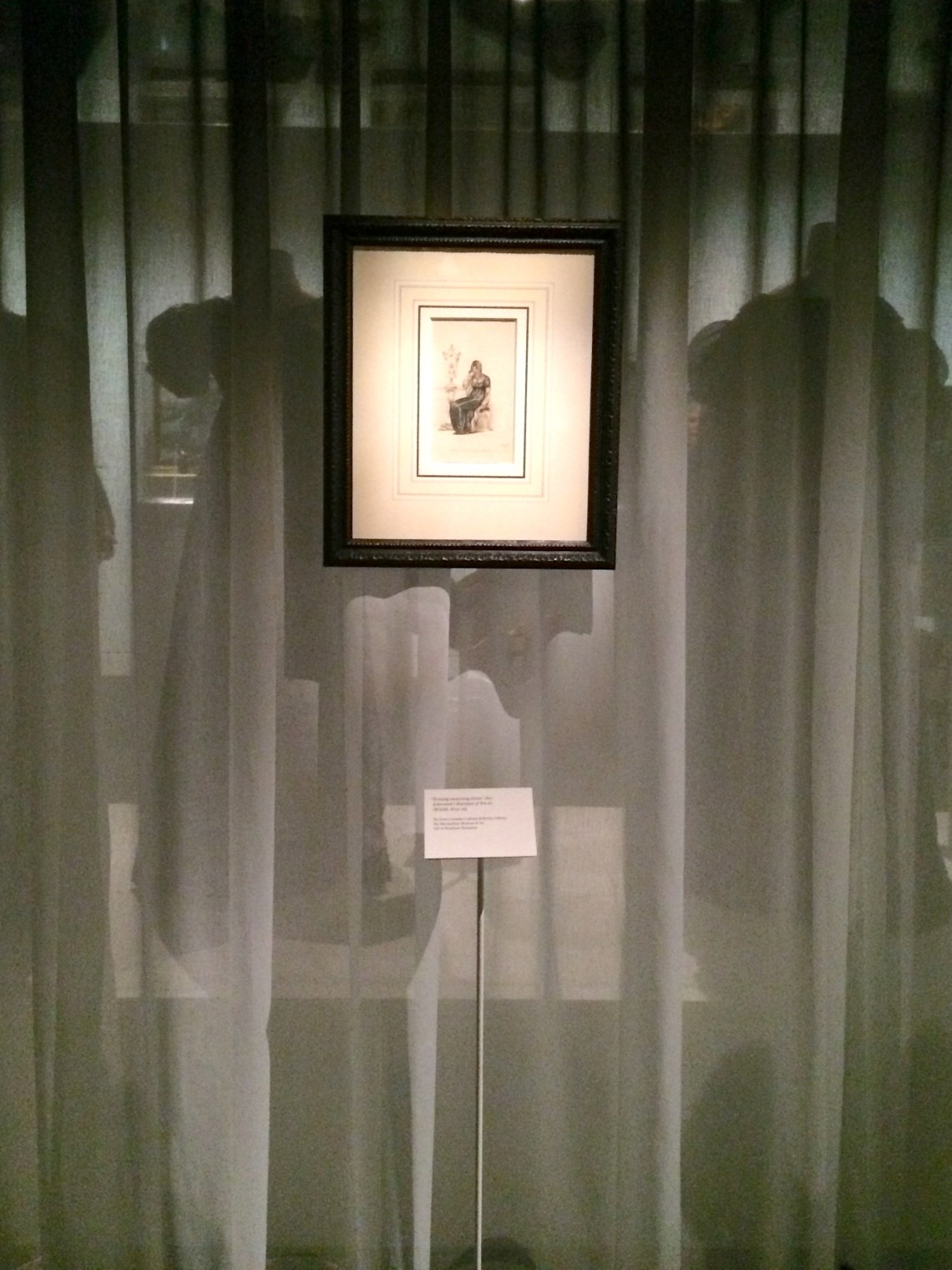 Humor changes with the times. Take the legendary Chazz Reinhold, for instance (Will Ferrell’s character in Wedding Crashers). The sage, the legend, the mentor, who, after years of crashing weddings, has now taken to crashing funerals because “grief is nature’s most powerful aphrodisiac.” The idea is so absurd it instantly elicits laughter. Even funnier, however, is the fact that men actually acted this way in the early 19th to early 20th centuries. While it may seem ridiculous now to capitalize on and sexualize a woman’s grief, according to Death Becomes Her – the new exhibit (and the Met’s first fall exhibit) at the Anna Wintour Costume Center Galleries – back then, this was pretty routine behavior. Back then, a woman losing her husband rarely engendered sympathy from other men. 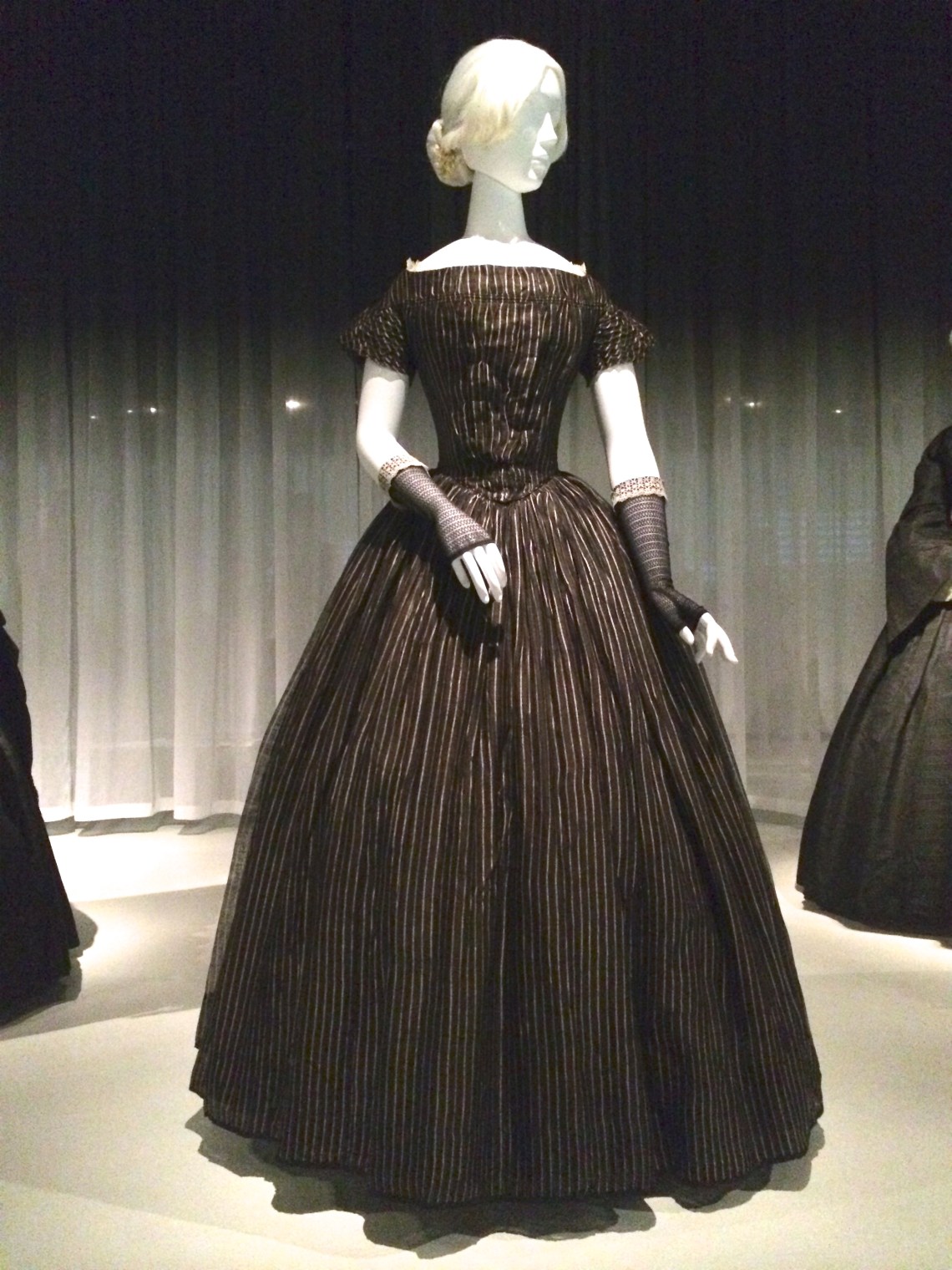 When you’re as oppressed and forcibly reserved as these Victorian-era women were, something as bleak as the death of a husband had the power to make them appear wildly provocative, and for no other reason than the fact that they were no longer tied down to a man. Never mind the fact that the death of a husband was still just as impactful, just as traumatic and heartbreaking as it is today.

This blatant inequity ran deep and even arguably precluded what we today call rape culture. For it’s one of the first instances in history when death is so closely tied to sex. “The veiled widow,” the show explained would attract at once “sympathy as well as predatory male advances.” A woman who just lost her husband was viewed by other men not as a tragedy, but as a “woman of sexual experiences without marital constraints” and “a threat to the social order.” It’s a perverse marriage of incompatibilities: misery and lust, despair and seduction, death and sex. Hence the quotes culled from 19th century women’s diaries that were projected onto the walls of the exhibit and in which women lamented their losses and the widespread disrespect that followed. 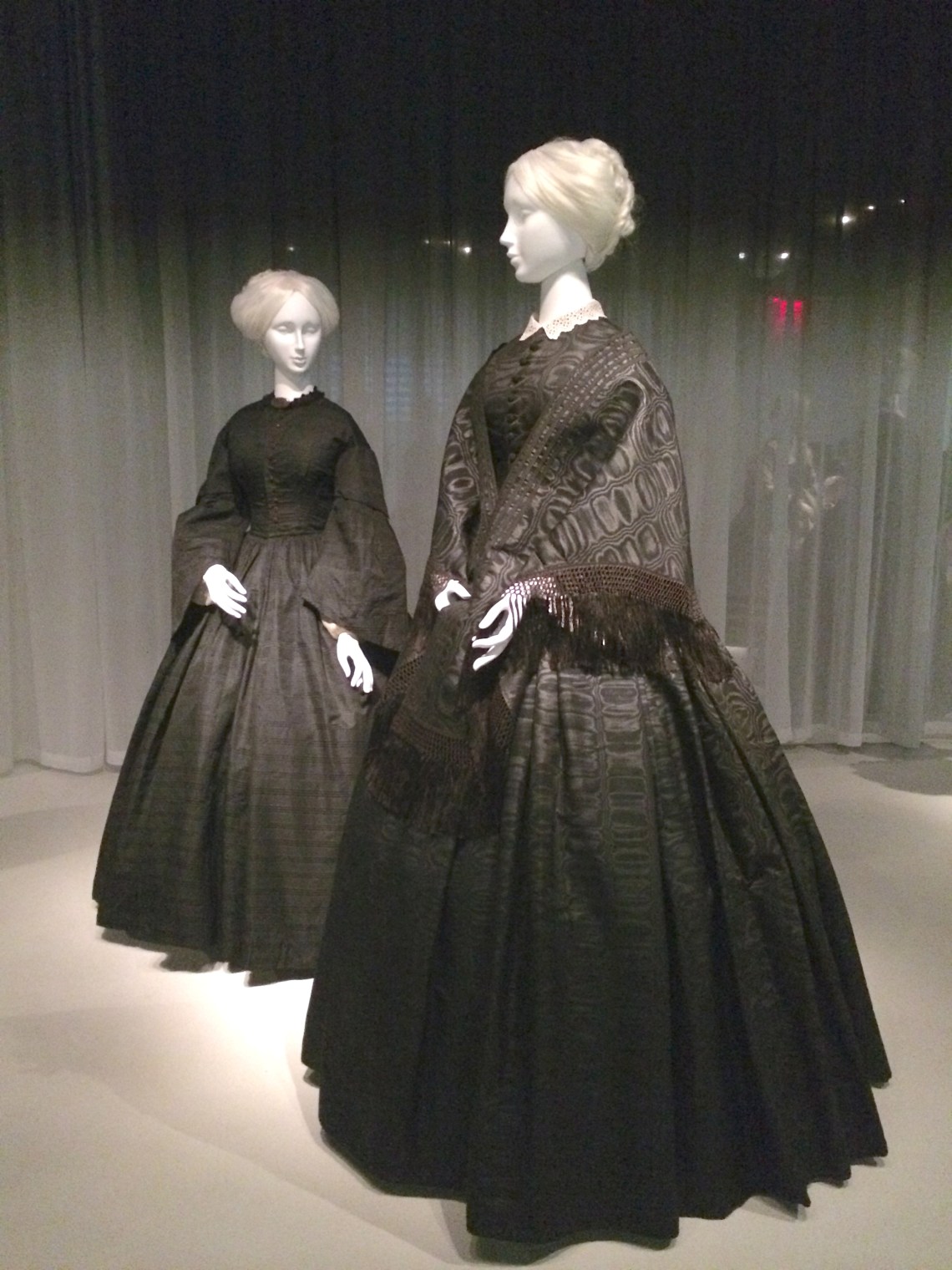 What’s more: these men, these predators of the grief-ridden, were never to blame. Instead the blame fell on the widows; when a man became enamored with a woman devoid of husband, draped in dark crape , it was always the widow’s fault. And it was her responsibility to stave them off. Framed in this context, the projected excerpt from Edith Wharton’s New Year’s Day makes abundant sense: “She was beginning to find that everyone had an air of remoteness; she seemed to see people and life through the confusing blur of the long crape veil in which it was a widow’s duty to shroud her affliction.” 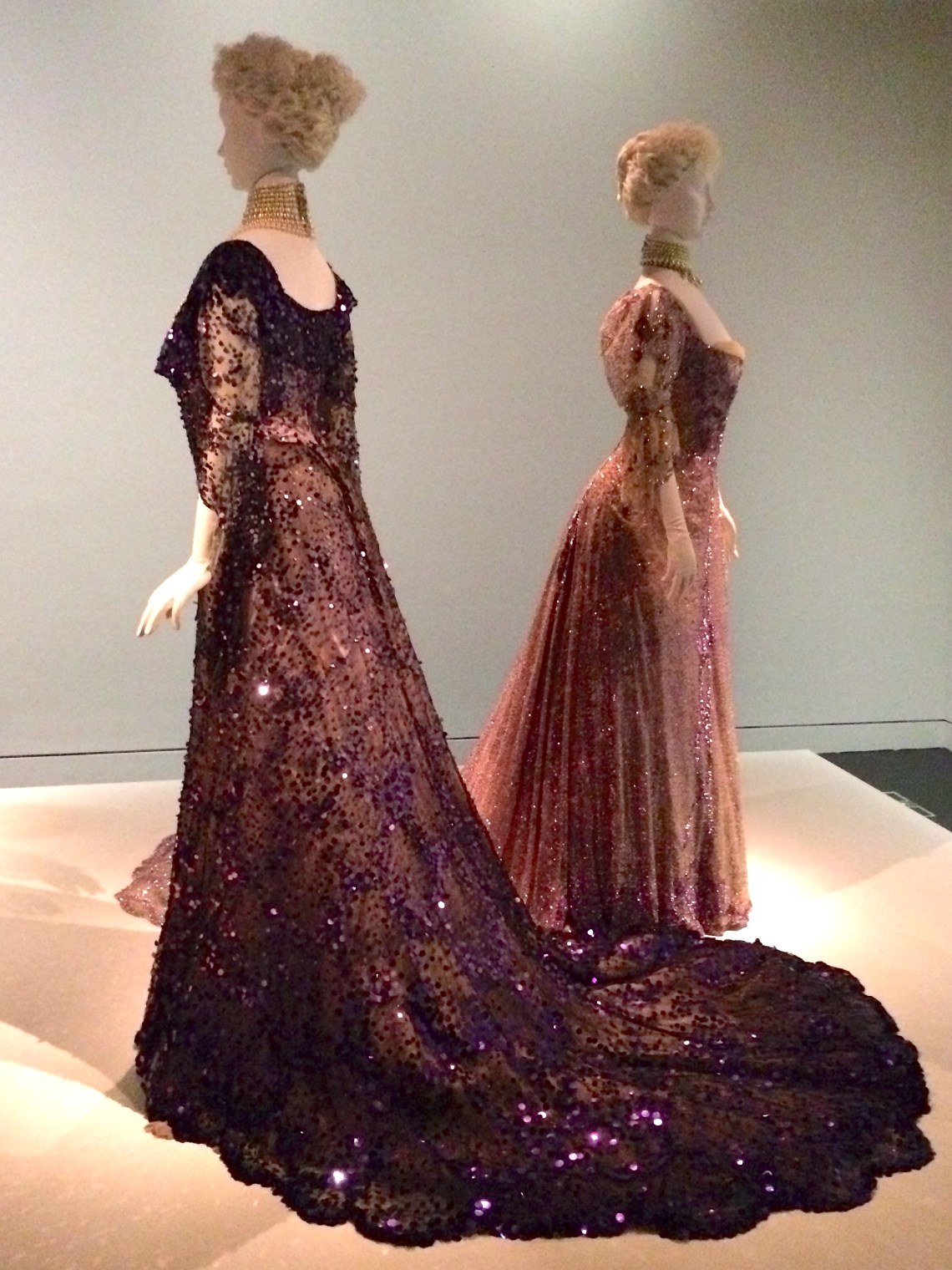 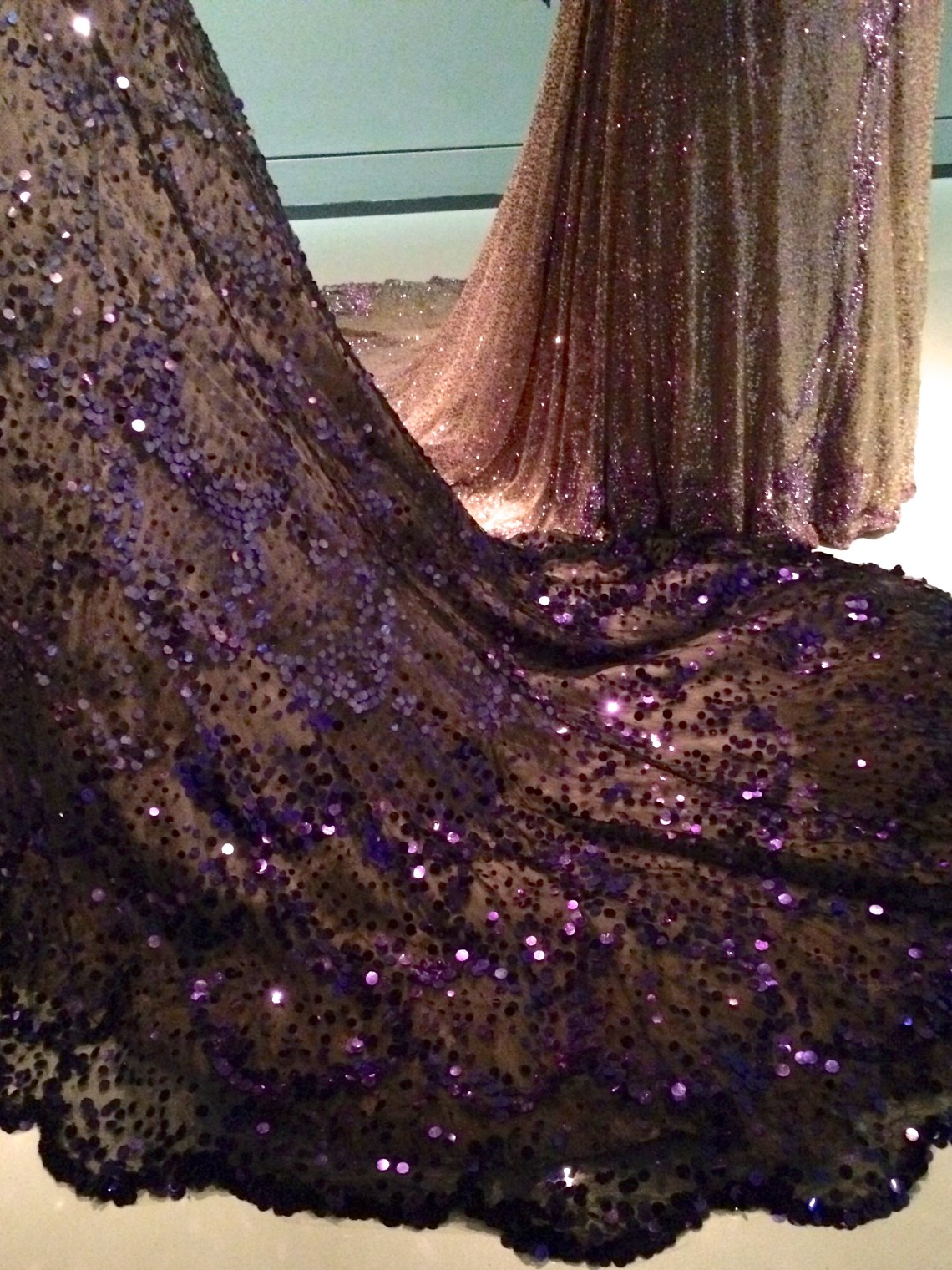 But of course, to learn about such inequities and absurdities is also a lesson in how far we’ve come. While at the show I overheard one older man ask another whether he was part of the exhibit or just happened to be dressed in black — a clear indication that today, it’s not easy to express grief sartorially, let alone the particular stage of mourning they’re currently in. The morning crape and the “crimped, lusterless silk gauze” that denoted the first stage of mourning, for instance, would be lost to us. As would the taffeta, poult de soi, and moiré that was emblematic of later stages of mourning. 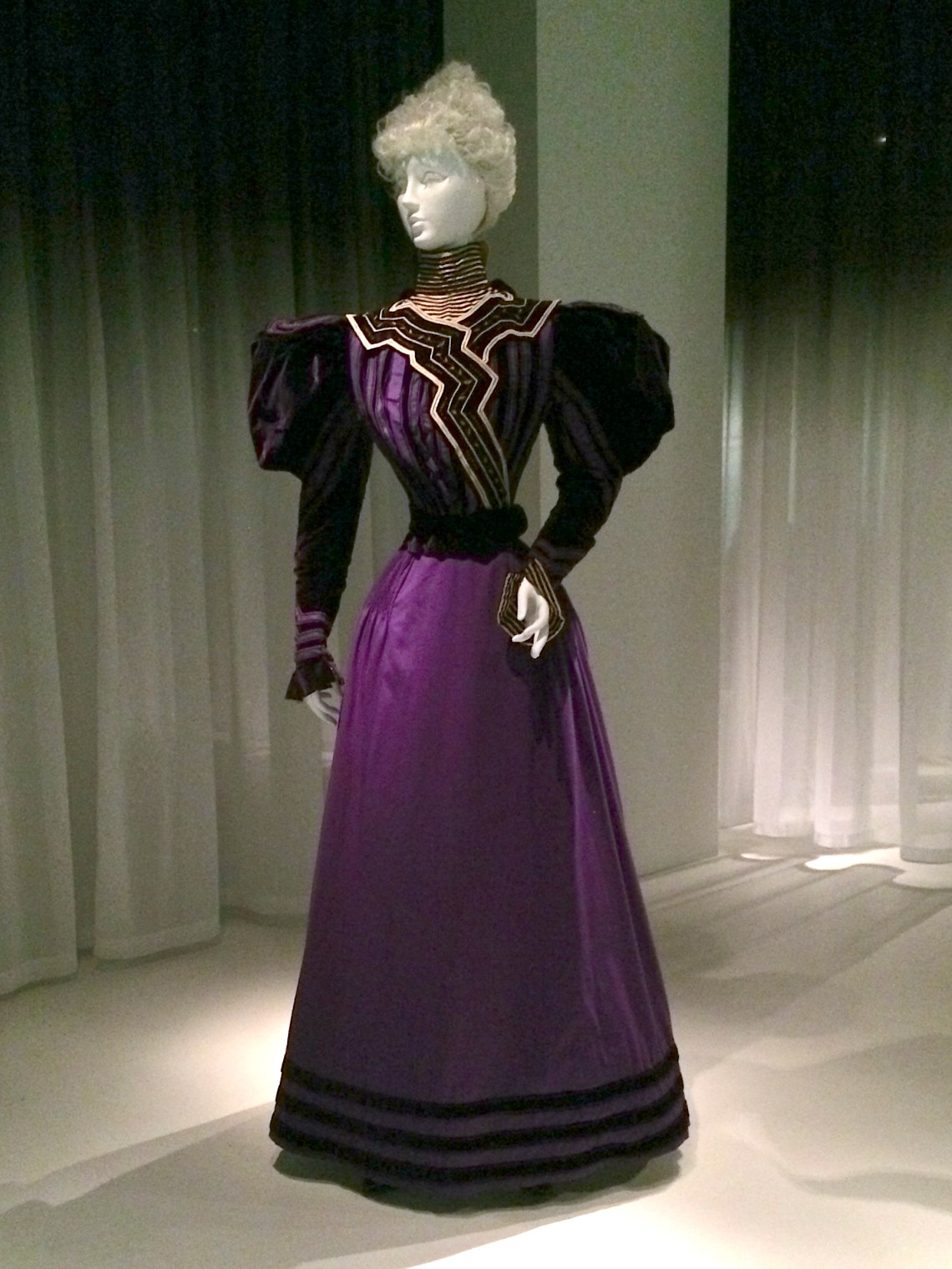 We’ve come a long way since Queen Victoria’s time, when “a woman in full mourning dress became the emblematic icon of bereavement in Europe and America.” But what of the husband? Throughout the exhibit, the word “widower” remained conspicuously absent because, back then, only a man’s death was worthy of attention and commemoration. Back then, only men died – or at least that’s all that mattered. Perhaps the greatest irony is that it’s the clothes that belonged to the women of the Victorian era – and not much else – that have stood the test of time.

8 Lessons I Learned After My Near-Death Experience

Death Of A Soulmate

Guess Which Accessory Is Taking The Fashion World By Storm This Week?