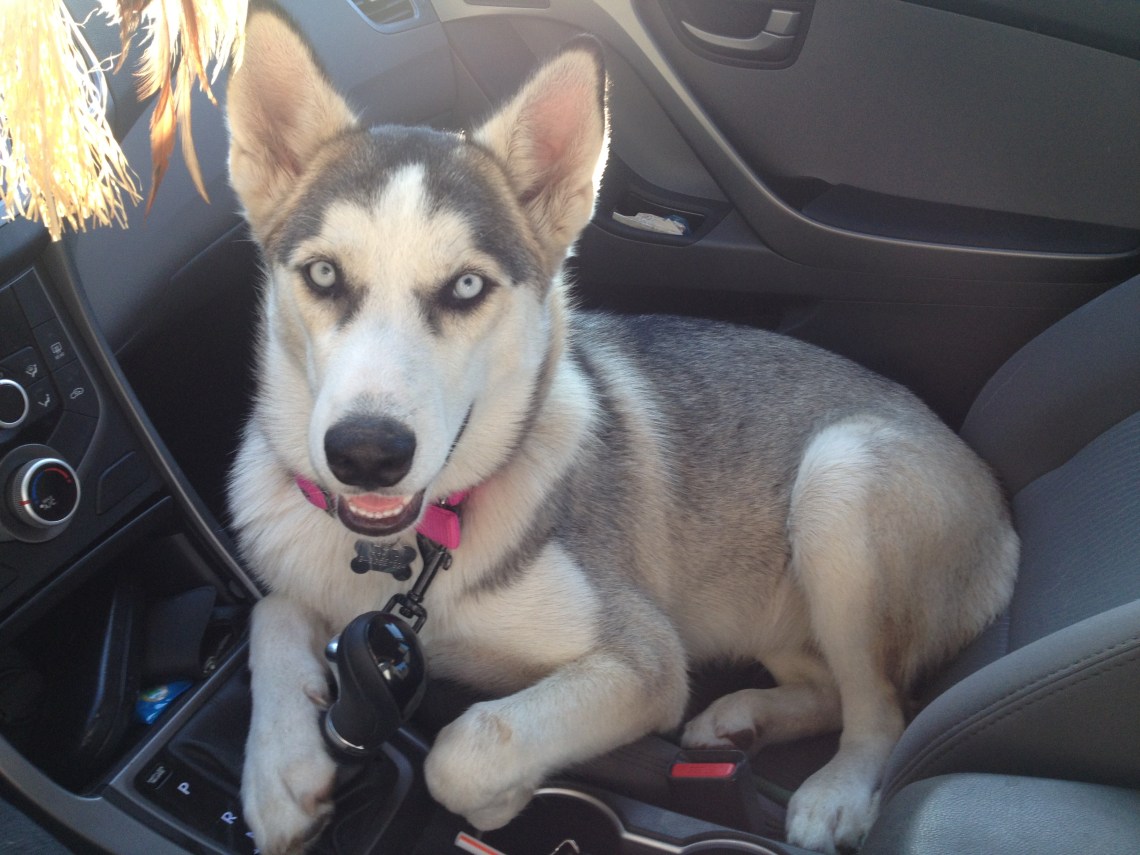 This is Nymeria. As of this writing, she is just about one year old, over 70 pounds and has eaten every toy I have ever bought for her. She is mostly Siberian Husky, and most canine experts will tell you that is a terrible choice for a first-time dog owner. They are willful, independent and believe that every leash comes with sled that is in dire need of pulling. In researching different breeds, the only thing I was certain of was that I could not handle a husky.

But then her stupid face popped up in my Facebook feed and here we are.

I have wanted a dog since I was about five-years-old, or ever since I knew what a dog was, but my family moved a lot, my mother was constantly traveling for work, and by the time we settled in one place I had left for college. It took many years and many jobs and many moves of my own before I could even consider owning a dog, and even then Nymeria fell into my lap well before I was ready for her. Sure, I read the books and bought up all the doggy paraphernalia, but nothing prepared me for actually owning a dog. So here are eight things I’ve learned since falling in love with the fuzzy little monster that ate all the doorstops in my apartment.

1. Your Dog Will Not Automatically Love You Back 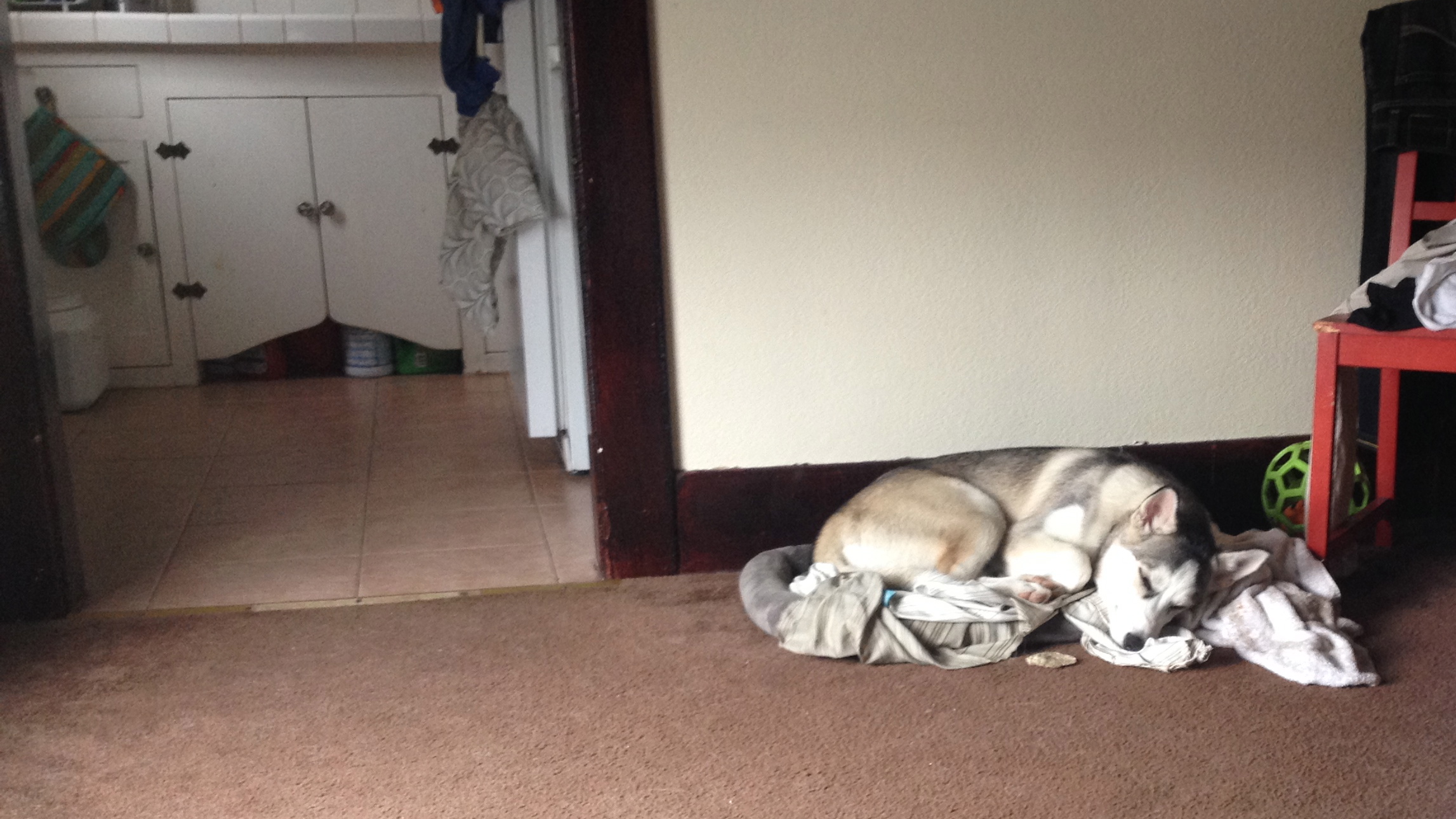 I was convinced that I had done something very wrong. When I brought my dog home for the first time, she curled up in the farthest corner from me she could find, squirmed away from every touch, ate not at all, and occasionally screamed. This was not the glorious puppyhood I had envisioned for the two of us.

As my friends and family will attest, I spent those first few weeks in a state of sleepless anxiety, torn between wanting to take care of this very vocal, very mobile thing I had suddenly introduced into my home, and wanting to pack her up in her little crate and drop her off at the nearest shelter. A dog, I quickly realized, is a living thing, and like any living thing, how easy it is to live with is directly proportional to how much it likes you. My dog didn’t like me at all, and that made caring for her an endless and fearful chore.

The thing is, I had no idea where Nymeria had been or what she had been through prior to me deciding she belonged to me. And Nymeria is stubborn. She is a very, very stubborn dog. It took many weeks, many attempts at snuggling, and many one-sided conversations before she would accept that I had her best interest at heart.

And now she starts every day by jumping on my bed and burrowing into my arms. So I’ve got that going for me, which is nice.

2. Your Social Life Will Change 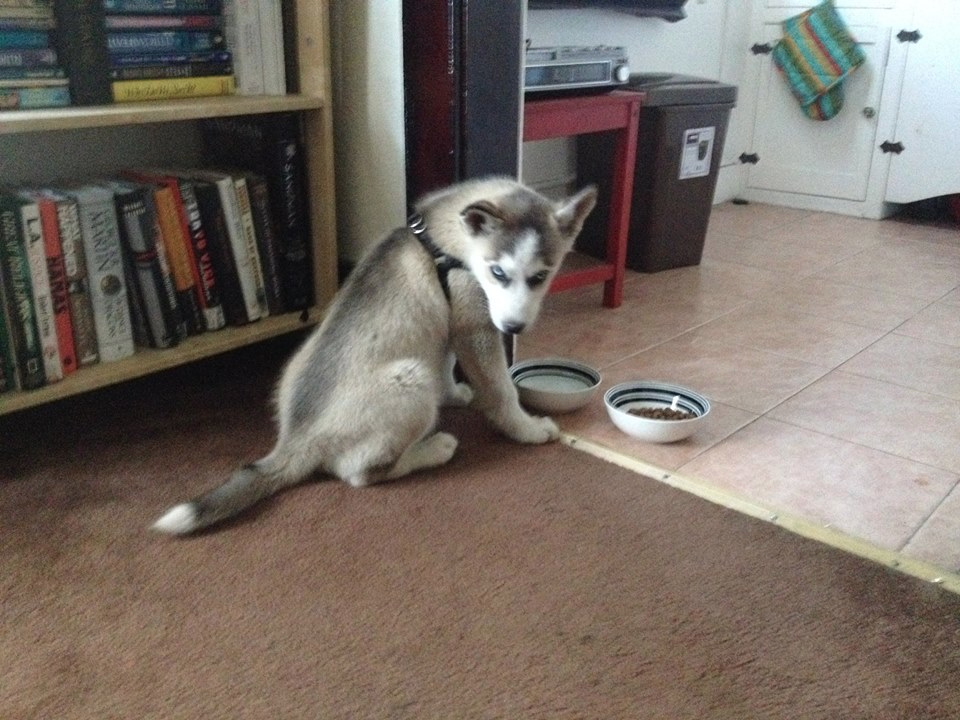 I work from home, and if I didn’t I never would have chosen a husky for my first dog. They are far too wily and far too intelligent to just chill on the couch all day. They need to run around, they need to chew on things, and they need to express themselves through the majesty of song. When Nymeria was a puppy, I was too paranoid to leave her alone for any trip longer than to the laundromat and back. Part of that was practical (I wanted to avoid accidents) but a big part of it was the normal fretfulness that affects every new parent: Would she think I abandoned her? Will she find her way into a forbidden cupboard? Will she bark until the neighbors complain?

All of this fretting has a significant impact on your social life. You plan your time out in hourly increments, and the halcyon days of day-drinking and aimless wandering are gone forever. On the flip side, I have a dog to wrestle with whenever I come home.

3. She Was Full of Worms

I don’t mind spiders. Cockroaches don’t bother me too much. Rats, bats, all the assorted vermin of the underworld, they’ve never given me too much anxiety. I do, however, dislike worms. And it just so happens that puppies are usually full of them. Nymeria was no different. Shortly after getting her first set of vaccines, my dog’s bowel movements became a Lovecraftian nightmare. Each walk was concluded with a shaky squat chock full of the squiggling parasites that were dying inside her. I didn’t enjoy bagging those poops, and my dog really didn’t enjoy passing them. On some occasions, she became so alarmed that she tried running away from her own bottom, resulting in a dizzying cascade of dirt, shit and pale, writhing spaghetti.

The good news is, worms are normal in a puppy and getting the traditional round of shots usually clears it up in a few weeks. The bad news is, those things are just camping out in your dog’s guts until you do.

4. You’re Going to Get Poop on Your Hands

I am a fairly clean, fairly civilized human being. As a rule, that means I minimize the amount of contact my skin makes with fecal matter of any kind (especially the kind with worms in it). Yeah, well, like it or not, you’re going to eventually get poop on your hands. Also…

5. You’re Going to Talk About Poop a Lot, Usually to Strangers 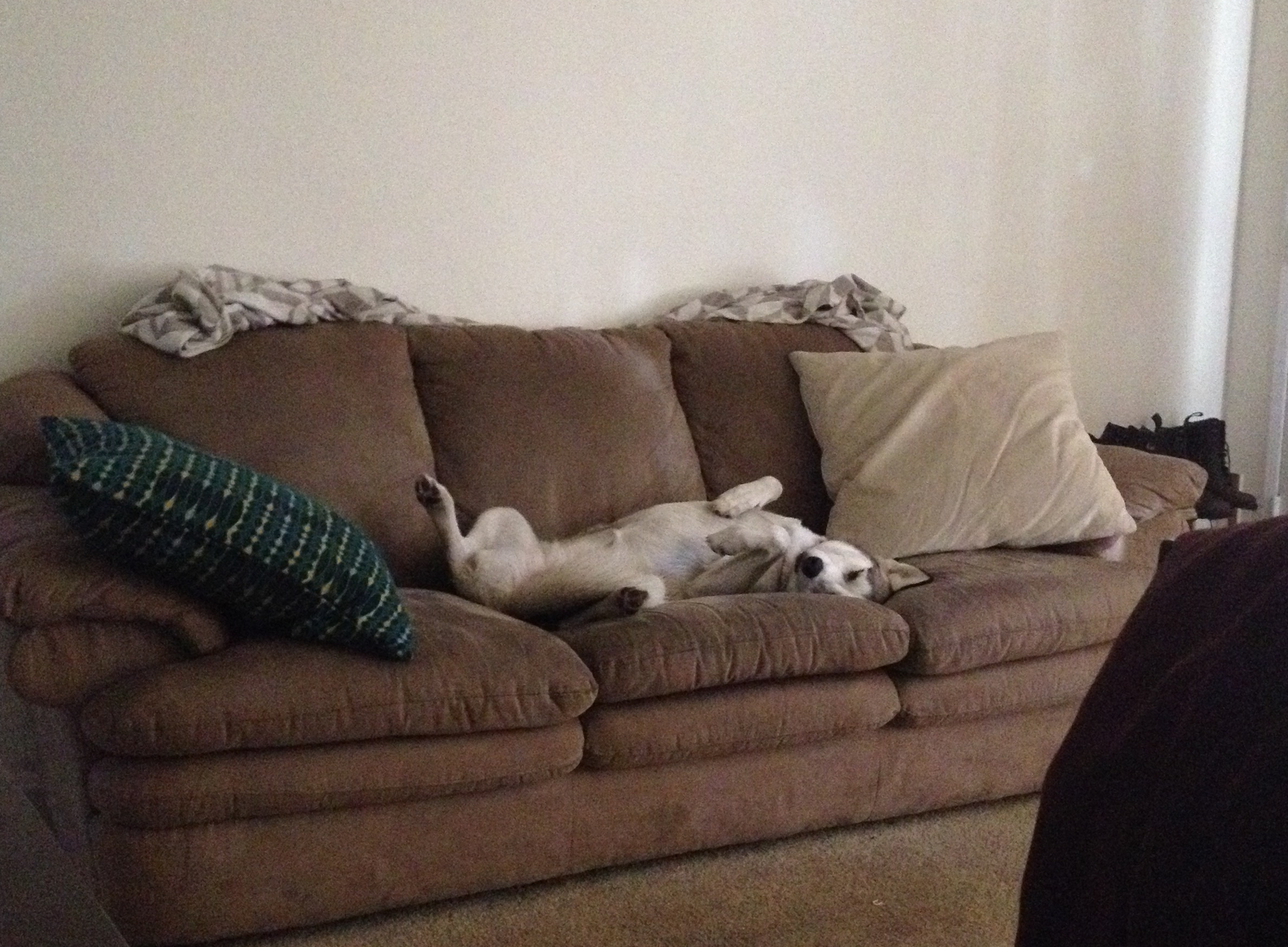 Nymeria has a sensitive stomach. I’m told this is normal for huskies. However, on top of that delightful issue, between February and August 2015 she contracted Giardia, a stomach parasite, no less than three times. It causes funky and frequent diarrhea. Consider that, and the fact that my last three points here have all involved poop, and it may not surprise you that poop is a frequent topic of conversation in my household and at the dog park: Consistency, color, what bits of toys and tennis balls I discovered in it this morning, and whether or not it’s mushy enough to merit a trip to the vet.

6. You’re Going to Be Involved in Dog Park Politics (Whether You Like It or Not) 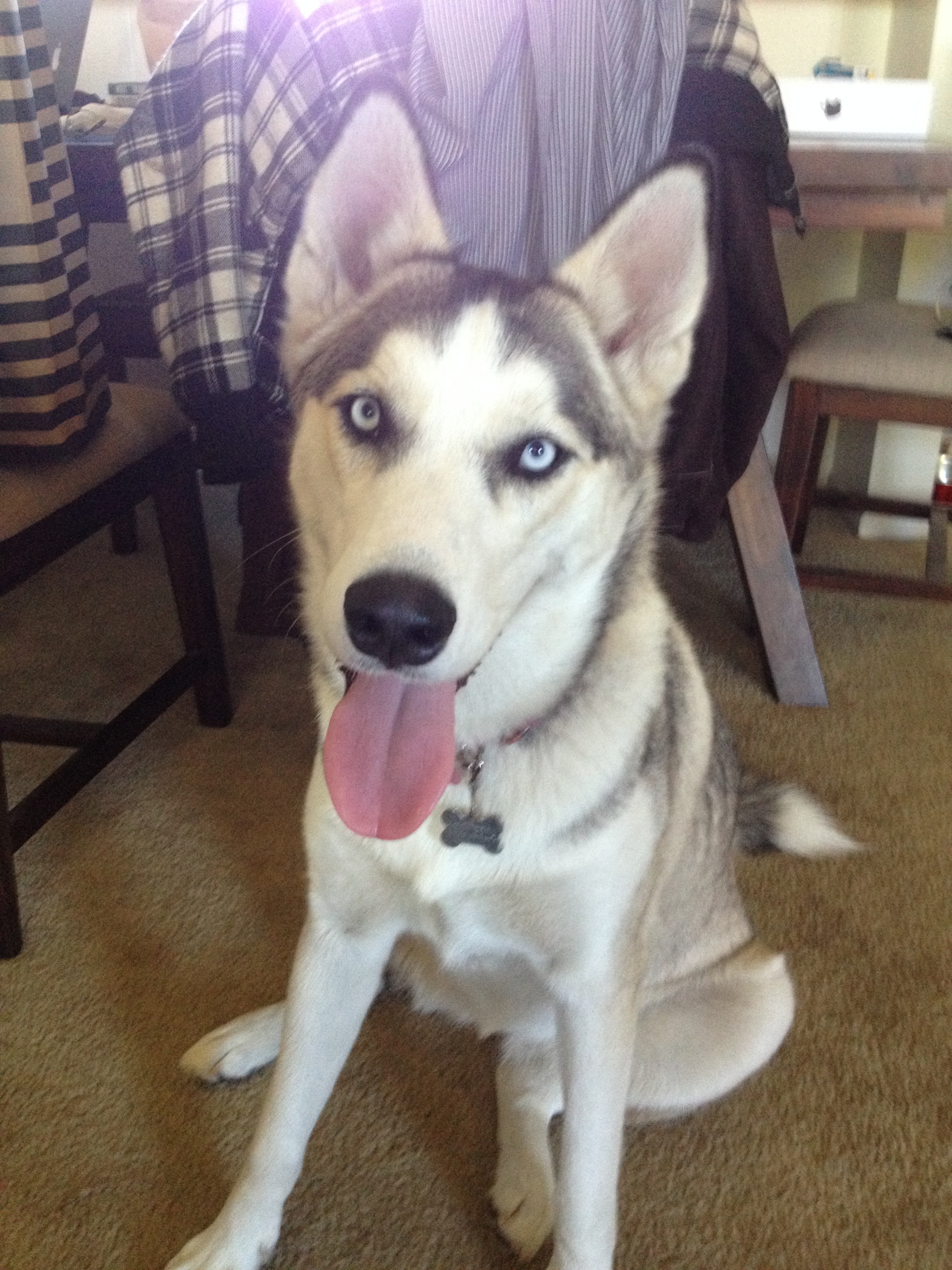 Have you ever had the experience of working with a colleague for months, or even years, before finding out they’re extremely religious? Have you ever had to outrun a homeless man who was frothing at the mouth? Do you know all the sordid details of why a stranger is breaking up with his live-in girlfriend because he won’t stop shouting into his cellphone on the bench beside you? If not, these experiences or ones disturbingly like them are all awaiting you inside the dog park.

And don’t get me wrong, I love the dog park. It’s the only real way to get Nymeria to sleep at night. I have met some truly wonderful, kind and fascinating people at the various dog parks located in Orange County. But the dog park is just a smaller version of the world beyond its chain link fences, and for at least one hour of every day, there is no escaping it.

7. It’s Going to Get Expensive

There’s no getting around it: Caring for another living thing is not a cheap endeavor. You want to make sure you get the good food, you want to make sure you get the good toys, and then you need to do that all over again when she’s eaten all the good food and/or all the good toys. The first few months are especially expensive, as puppies traditionally have about four sets of vaccines they need to get. Then, if your dog has a thick coat (like mine), you’re going to want to invest in a decent vacuum cleaner and a professional grooming brush, both of which go for very professional prices. Then there are the baths, the dog training classes, and the occasional surgery. Nymeria was spayed a few months ago, which put her in the cone for a few weeks, and then last month she had part of her face gouged open by another dog that wanted a tennis ball just a little bit more than she did. That necessitated a trip to an emergency vet, a set of stitches, antibiotics and another cone, all of which cost far more than I was planning to spend that month.

They say two can eat as cheaply as one, and that may be so, but they also say a man’s best friend is his dog, and that means he occasionally has to flatten his wallet to make sure she’s comfortable.

8. Everything Is a Conversation 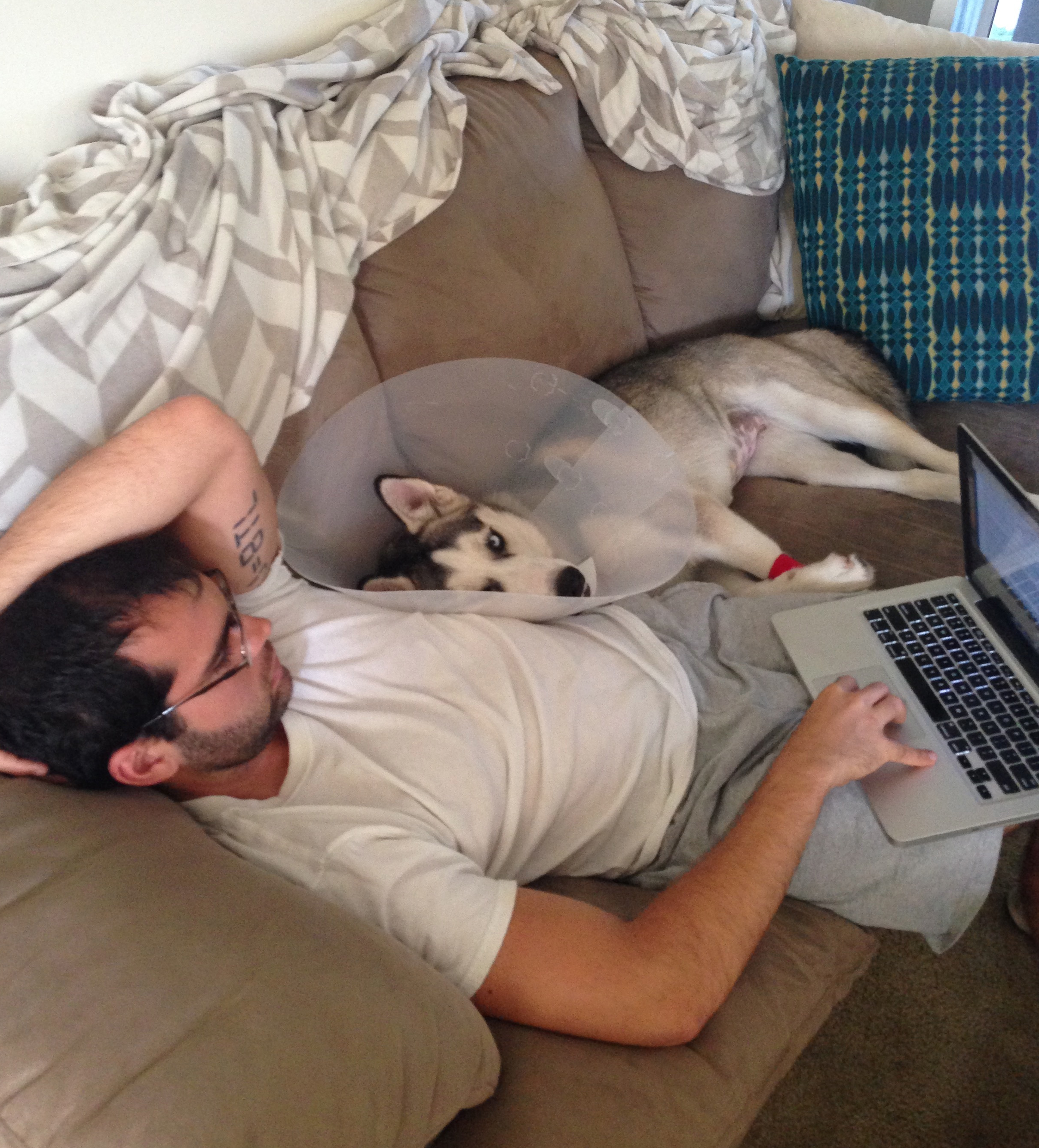 I’m still surprised by how quickly Nymeria became a part of my life. She’s my family now. And while that does mean she occasionally does things I can’t excuse (like eating and then vomiting up non-matching pairs of socks), it also means that wherever one of us goes, the other one is not far behind.

I talk to Nymeria a lot, but not all of those conversations are out loud. Oftentimes it’s a shared look across the living room, either her asking me if this is an appropriate time to toss the squeaky monkey or me telling her to stop trying to assassinate the cat next door. She also knows when I’m having a bad day, or when my girlfriend is having a migraine, and in an instant she transforms from a mouthy little pest to a big fuzzy pillow.

Everything is a conversation, from snorts and howls to barks and body language, and the conversation is never boring. Granted, I do wish she’d told me dogs aren’t supposed to eat onions, but I guess that was something we both had to discover for ourselves.