Discovered by a flight attendant on layover in LA. She reported it to the carrier so she wouldn’t get blamed. 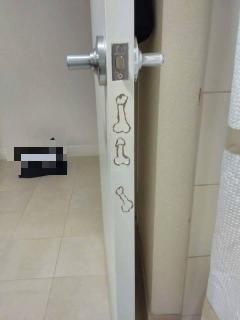 2. A veritable fountain of mold.

“I was heating up my food in the communal lobby microwave. I felt something drip onto the hand I was holding my plate in, so I looked up and saw this disgusting mess,” says a flight attendant staying at a Radisson hotel.” 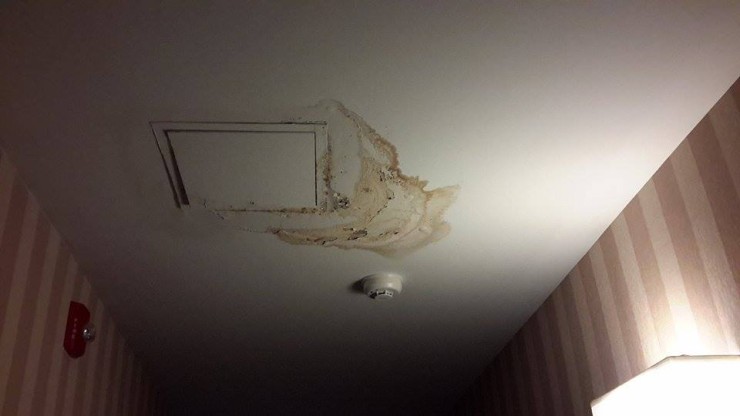 A hotel that stocks Playboy brand condoms in the vending machine. 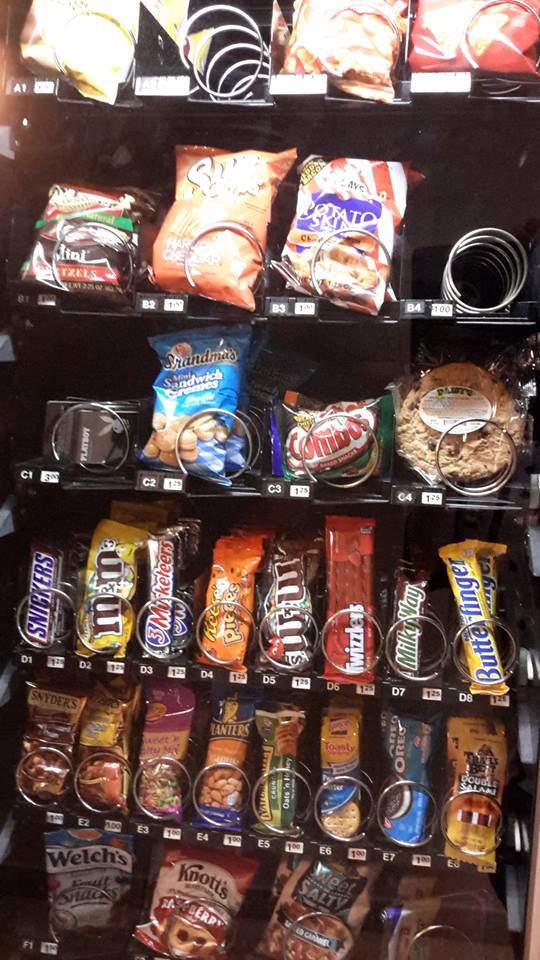 4. In bed with a giant spider.

This little bugger was found lowering itself onto a horrified flight attendant’s bed in a Milwaukee hotel. Shrieks and hairspray sent it RAPIDLY back up the ceiling, at least temporarily. 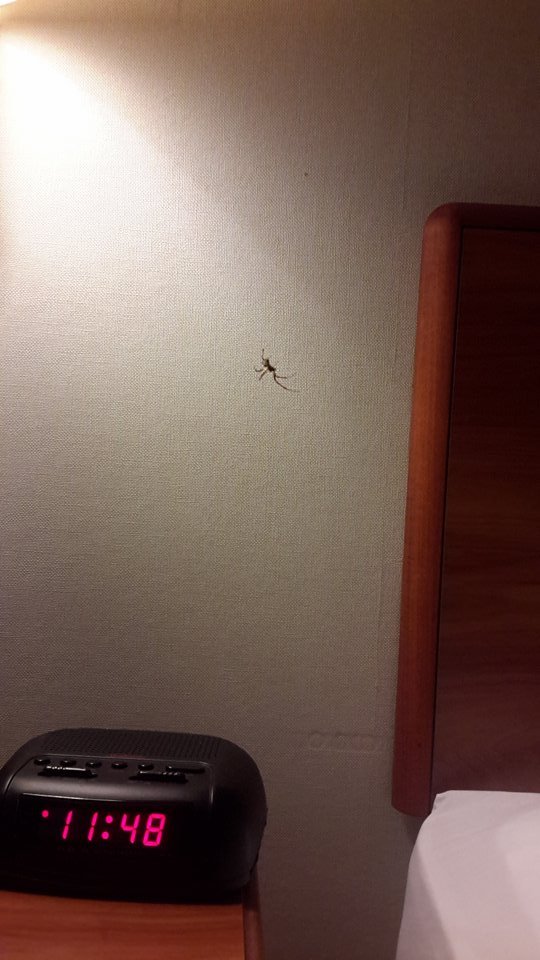 “My toe just got stuck in some unidentifiable goo on the floor in my room. I refuse to get down and smell it…” 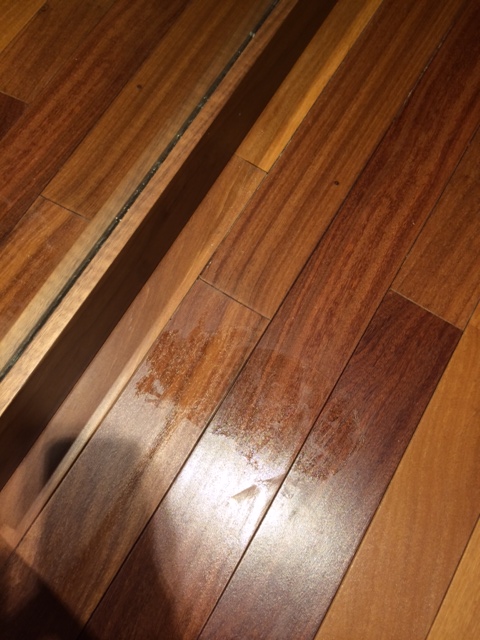 6. When a bathtub drain makes you feel totally unclean.

From an airport hotel in Orlando. Nice. Probably not a tub you’d want to take a bath in. 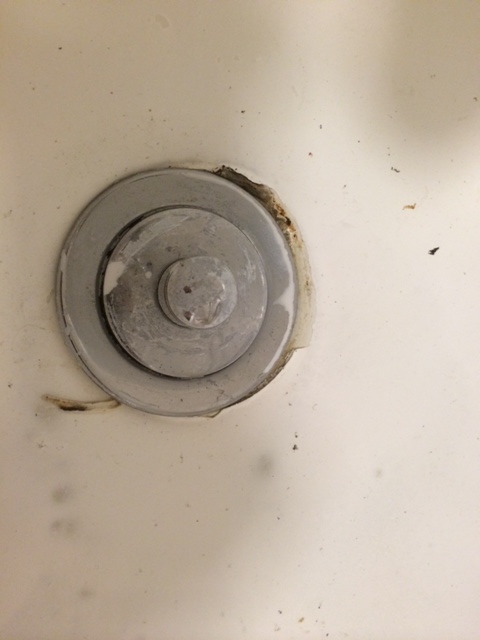 After her shower, one flight attendant noticed that a puddle of dirt particles had accumulated on the tub’s floor. Since the dirt wasn’t there when she stepped in, she could only assume that it came out of the drain mid-shower. Ew. 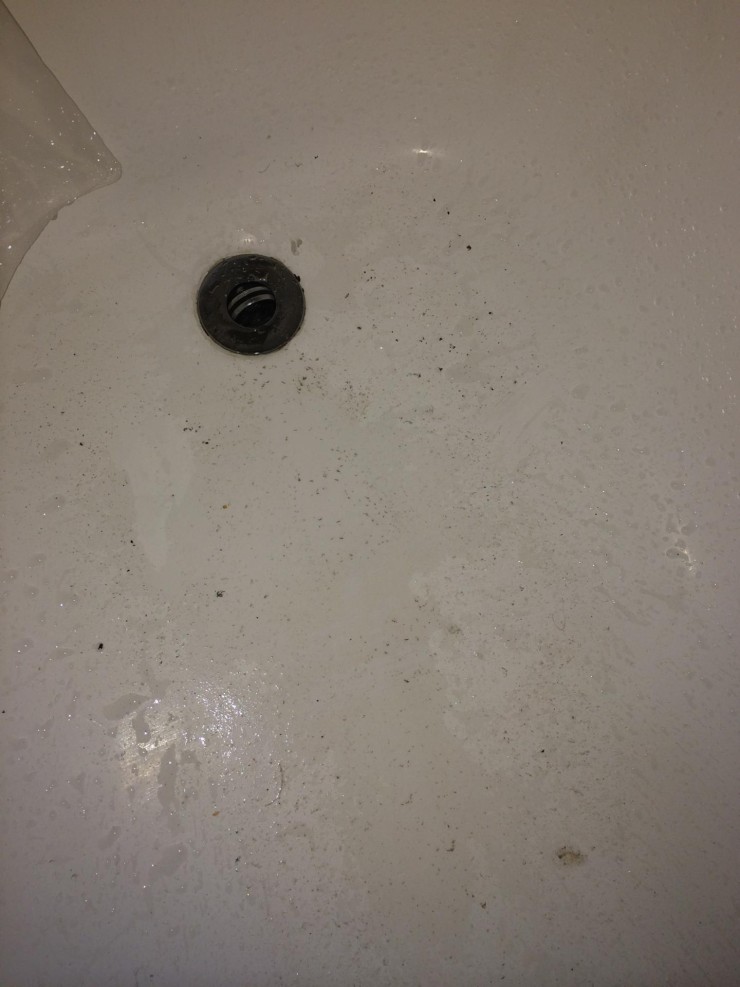 8. A Moldy hair dryer guarded by a cockroach.

On layover in New York City, one crew captain found this disgusting hair drier alongside a giant cockroach. 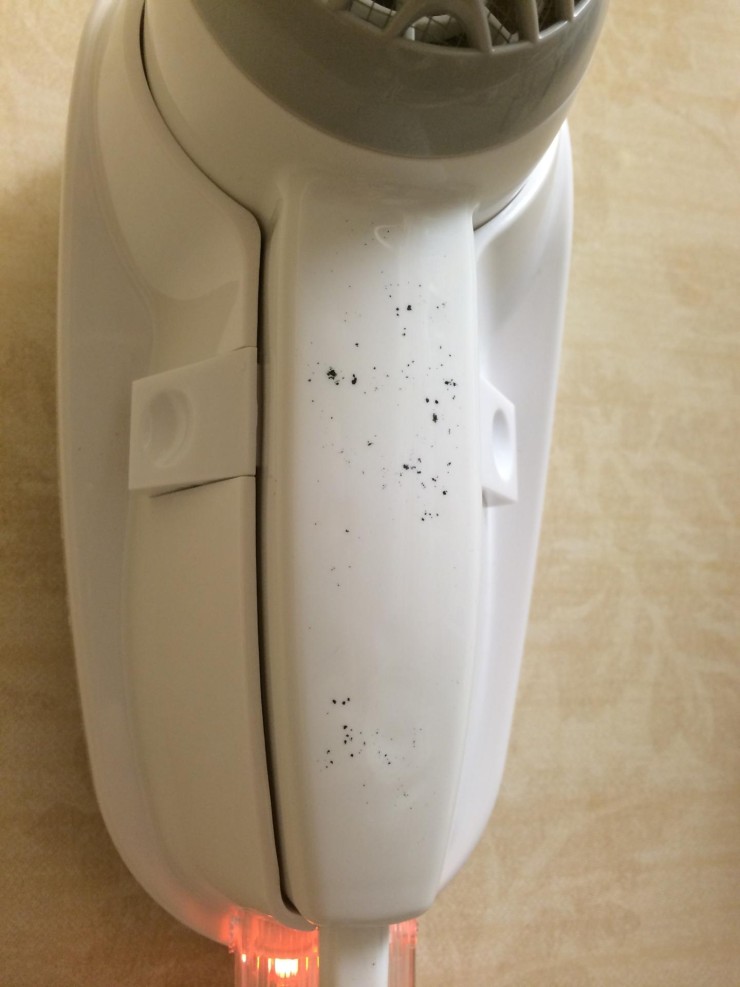 From a flight attendant at The Focus at SFO. Checked in and found paper wadded-up, plugging the door peephole. 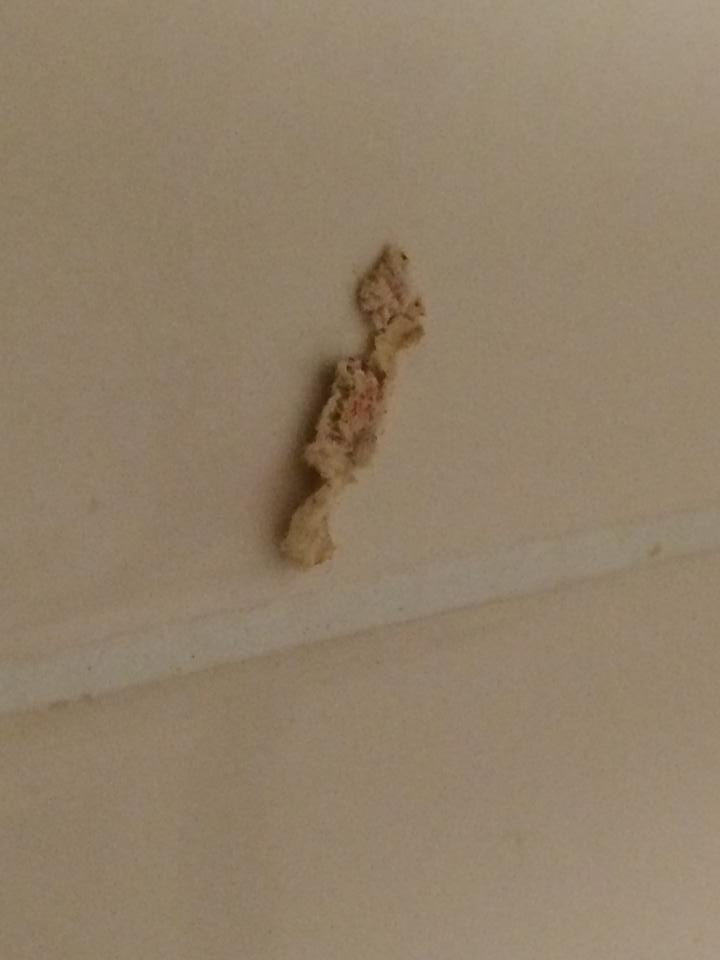 Someone REALLY wanted to break into this room at the Galt House in Louisville. 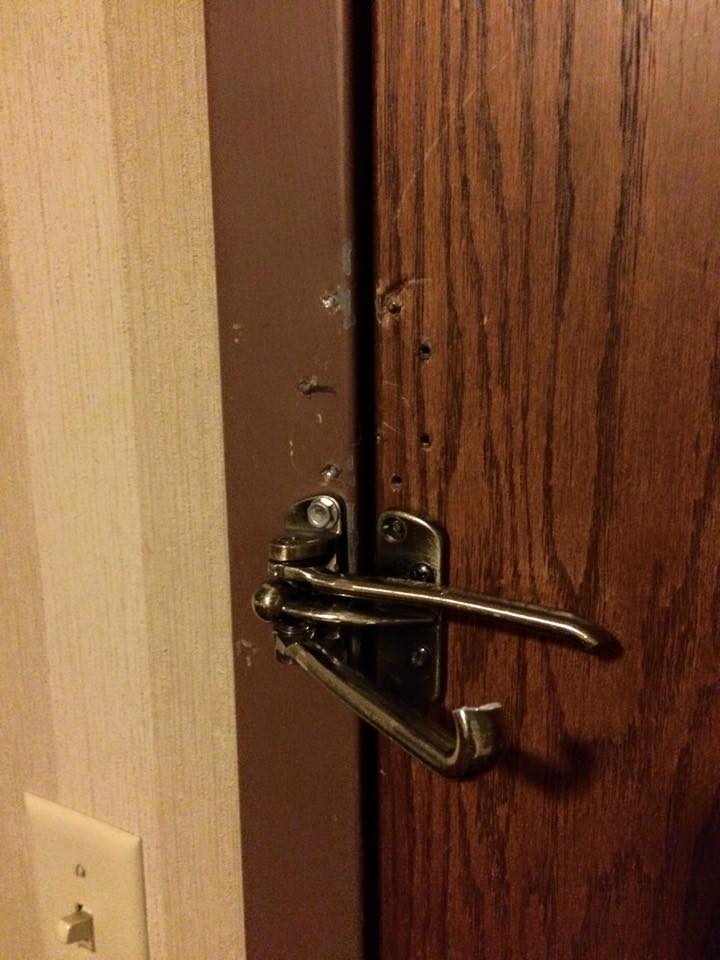 11. Shutting this kicked-in door won’t make you feel all that good, either.

If you look closely, you’ll see that this door has been kicked in, leaving it about half an inch making off its frame, and inspiring the flight attendant who checked in to sleep in a corner, can of Mace in hand. 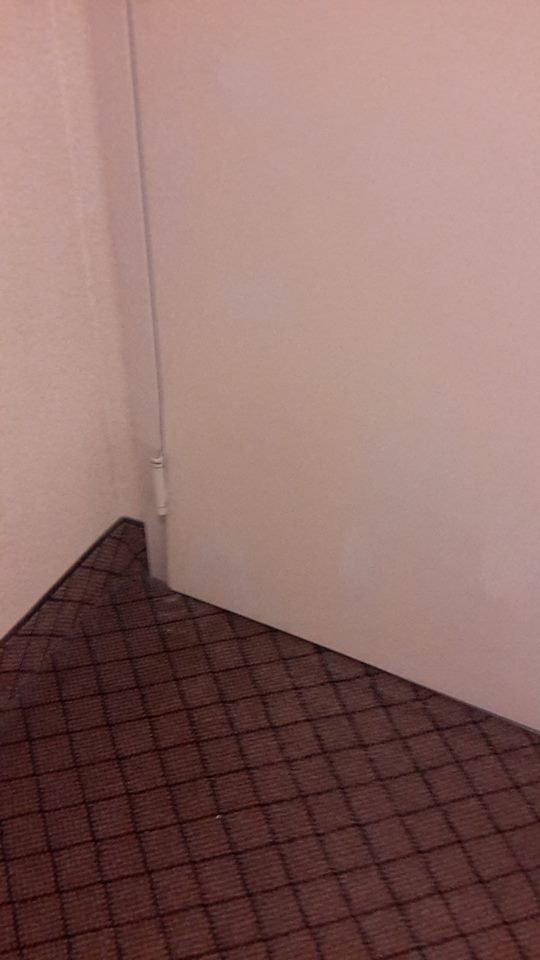 12. Same goes for this battered door.

Someone REALLY wanted to get into this room. 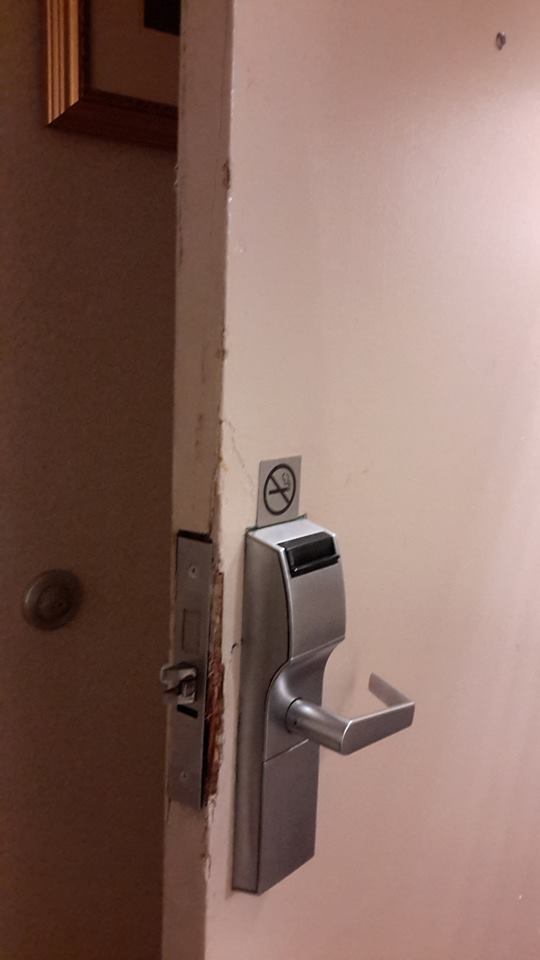 From an attendant working on Thanksgiving: “I was not too observant before stepping into shower this time. Almost through showering when I see this.” 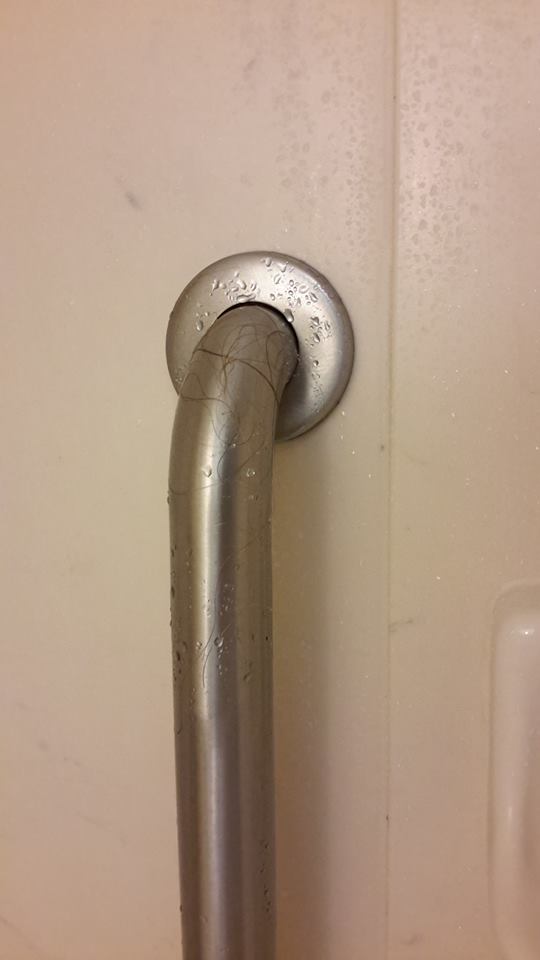 A flight attendant found this cache of hair in her hotel shower at a Courtyard by Marriott in Richmond. 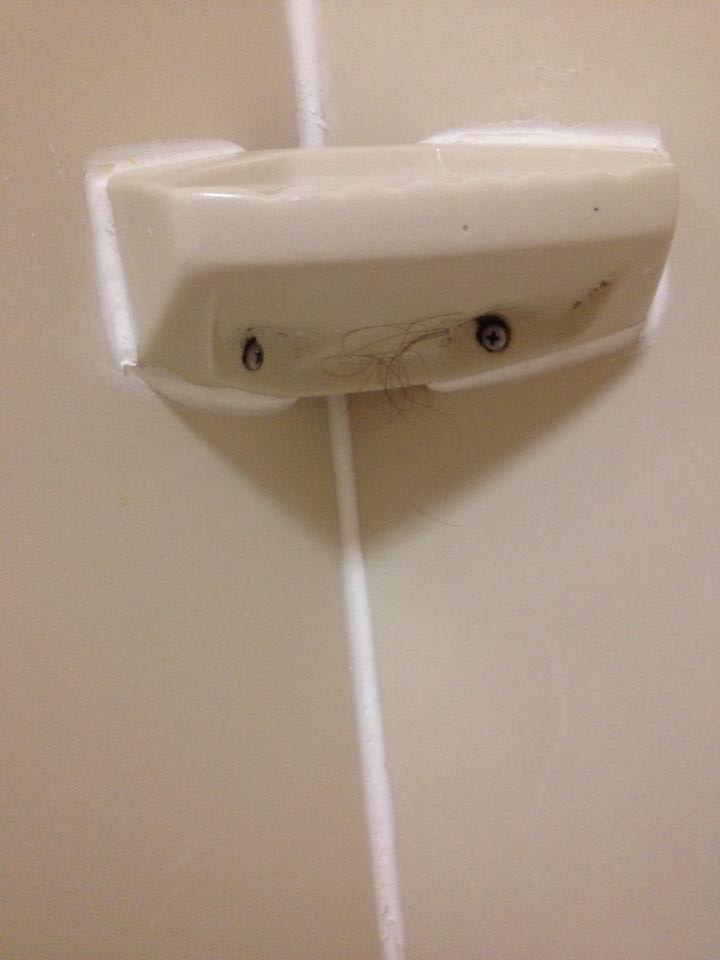 What the Hell? At an airport hotel in Syracuse. 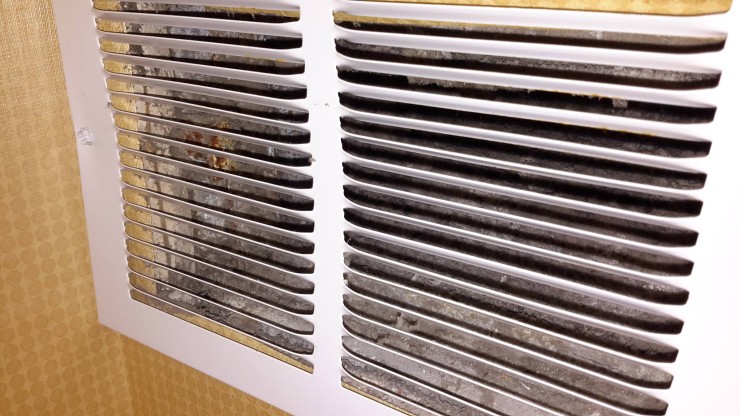 16. The least inviting chair of all time.

Submitted by a flabbergasted flight attendant in Charlotte. 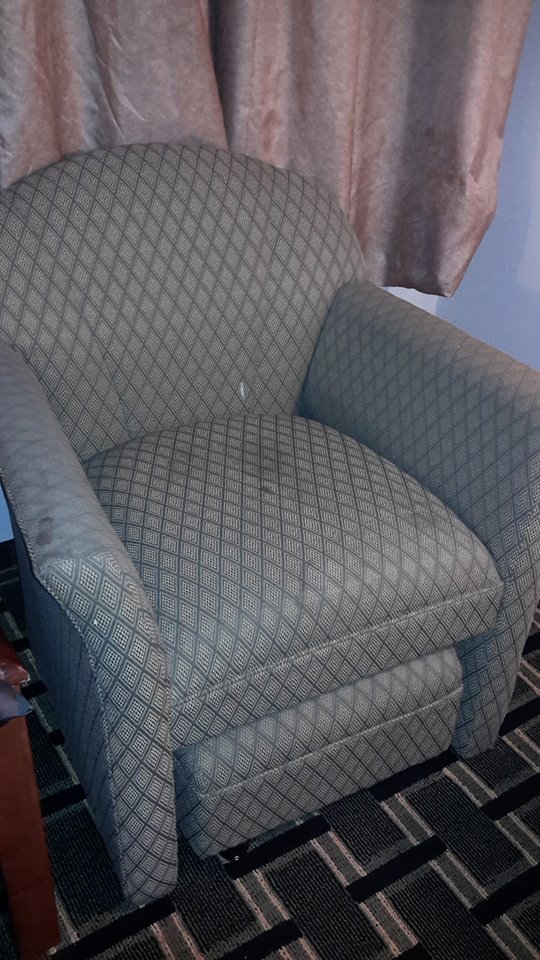 17. Not to be outdone by the least inviting bedspread of all time. 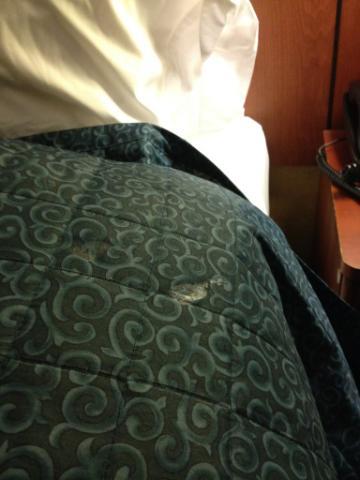 18. You’ll feel bloody uncomfortable in this bed, too.

Blood on a bed doesn’t foster a comforting night’s sleep, that’s for sure. 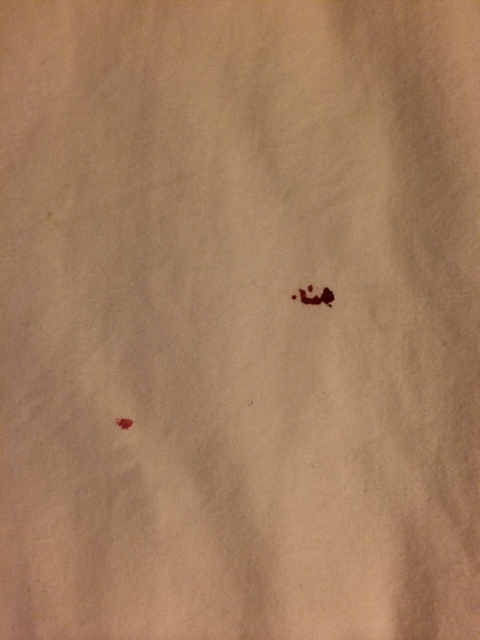 Another look at some under-the-sink grossness at a Comfort Inn in DC. 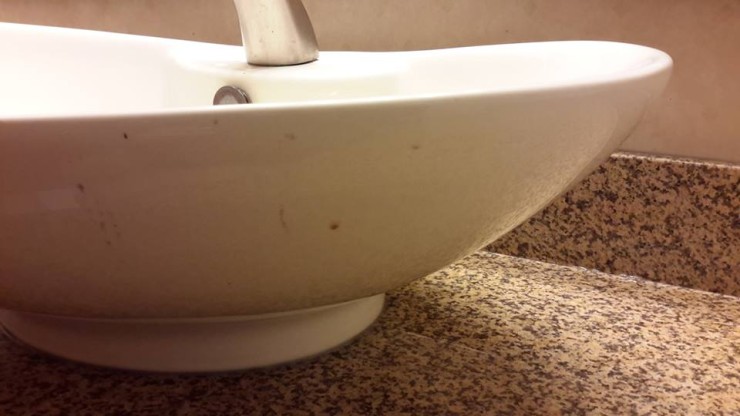 Not a great find if you have issues with fear of fire, electrocution, or spontaneous combustion. Spotted at an airport Best Western. 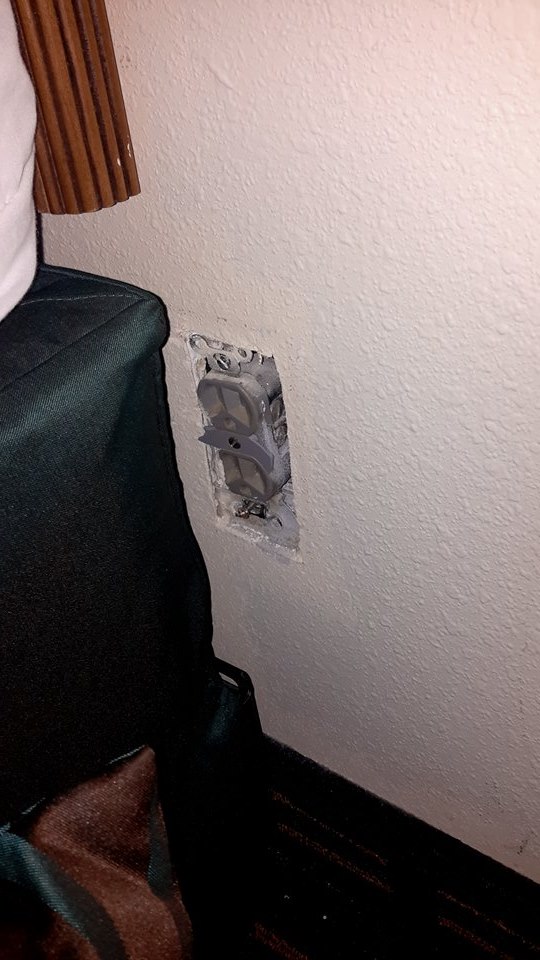 21. Perhaps I can interest you in a pee soak?

The flight attendant who discovered this tub of uriney water was stranded in Shanghai for two days due to equipment problems. The bathwater, she said, appeared to come directly from the river 21 floors below her hotel window. 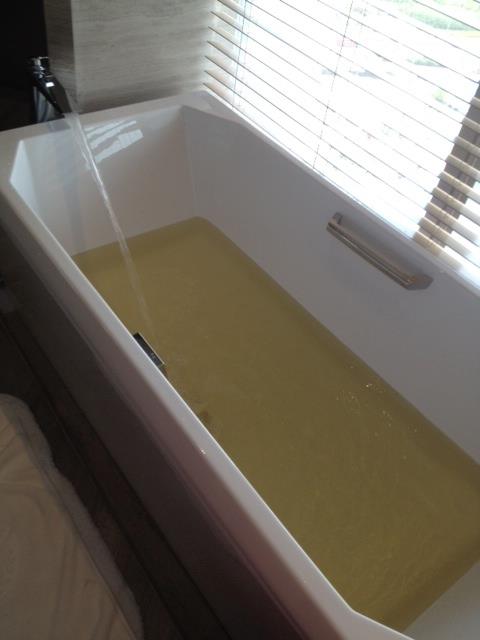 22. Who knew it was possible to make bacon unappetizing?

Submitted by an employee of a major airline who had this “bacon” delivered to her for breakfast. 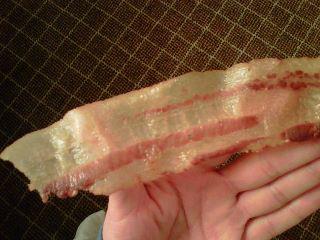 From a jet-lagged airline employee staying at the Renaissance Hotel in Mumbai, India: “I don’t think this toilet has been properly cleaned since the 80’s. Or perhaps it has and the guest before me just drank the tap water. Either way…GROSS!” 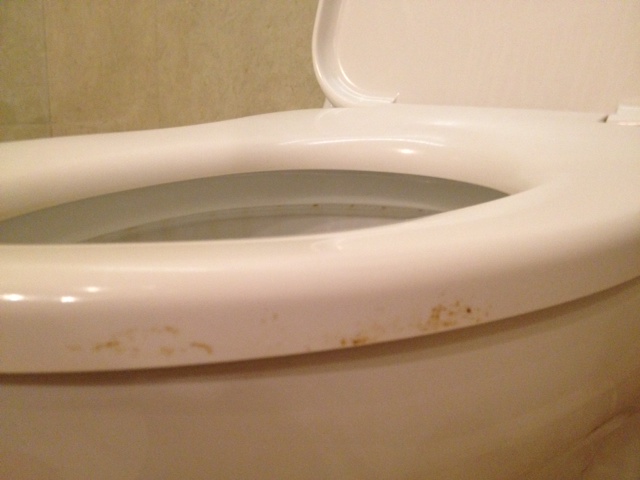 From a charter crew on layover in Cabo: “Went looking for an outlet for my phone & found this behind the bed…two lamp power cords spliced together with electrical tape & you can see where it had sparked at one point. Makes me wonder how many other rooms have this. If I die in a fire here, I figure someone should know what may have started it.” 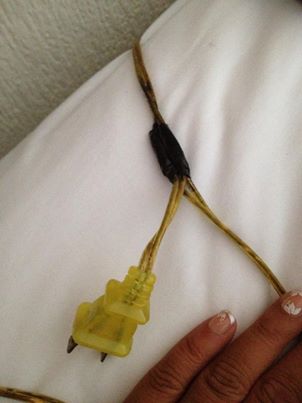