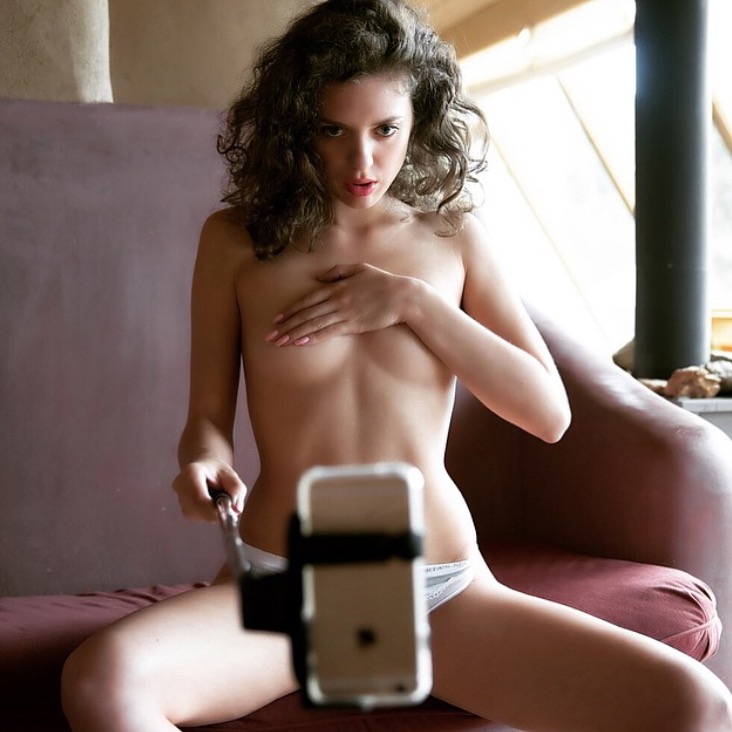 Last week, without any warning whatsoever, my Instagram account was deleted. The 400 posts I’d shared with my follower base of roughly 71K were titillating, but I had painstakingly followed every rule listed in the Community Guidelines section. I hadn’t featured “nudity…sexual intercourse, genitals, close-ups of fully nude buttocks…[or] nipples.”

Since my Instagram account was the promotional backbone of an online celebrity art project I’m working on (it’s been featured in Art Forum, so I promise I’m not just playing the “artist” card), losing it was devastating. I felt utterly violated. After sixteen stressful hours spent appealing the decision, they re-activated my account, explaining that it had been flagged as “sexually suggestive.” (What “sexually suggestive” actually means remains conveniently unclear.)

Some might think this would be a particularly good time for me to voice support for #freethenipple, a social media hashtag, documentary film, and political movement that claims to seek female equality and empowerment by securing the right for women to show their naked breasts everywhere from Instagram to the streets of Indiana. Celebrities like Miley Cyrus, Rihanna, Courtney Love, Lena Dunham, and Chelsea Handler have all embraced the cause. I will not. Below are ten reasons why I disagree wholeheartedly with #freethenipple, and believe it’s time we all shifted our focus to a phenomenon I call #paythenipple.

Instragam is great as it is, partly because the restrictions push users to be creative in showcasing their sex appeal without taking all their clothes off. It’s fun for models to come up with different ways to use the platform without violating all the rules. Limitations inspire exciting new forms of expression. My only complaint is that Instagram’s rules are ambiguous, so what’s actually permissible isn’t so clear-cut.

Some women might feel empowered by displaying their nipples on Instagram, but the way I see it, giving photos of your naked body to a major corporation empowers that corporation, not the women whose nipples are pictured. Why give your naked body away for free when you can monetize a nipple shot on another platform? Women should focus on keeping the revenue their naked photos might fetch rather than take measures to throw that money away, effectively.

Scout Willis wrote in XOJane that “women are regularly kicked off Instagram for posting photos with any portion of the areola exposed, while photos sans nipple—degrading as they might be—remain unchallenged.” This isn’t the whole story, however. Instagram and all other social networks have the right to delete user accounts for any reason at any time, and they are under no legal obligation to clarify the reasoning behind their decisions. Fighting to be naked on a private corporation’s platform after accepting their Terms of Service is a little ridiculous, and we all checked that box when we formed our accounts.

4. #freethenipple is tacitly against sex work and a sex-healthy society.

Though perhaps not the intent of its proponents, #freethenipple is in many ways a socially conservative movement masquerading as a liberal cause. Were it not, it would have long ago encouraged women to charge for their nudity rather than give it away for free, out of respect for all women, including the many who make their living as sex workers. A sex-healthy society demands supporting women and men in making their own decisions when it comes to consensual sexual experiences, whether or not money is exchanged. This will allow us to get to the point where sex can be seen as a beautiful, natural, positive experience between two consenting adults that may or may not involve a financial component.

5. What’s good for rich celebrities isn’t always good for everyone else.

I respect a lot of the celebrities who support #freethenipple, but the reality is that these celebrity women don’t need money or an Instagram account to promote their work. The countless average women following in their suit aren’t as fortunate. The massive nudity giveaway the rich and famous are encouraging essentially results in the financial disenfranchisement of working class women who can’t afford to forego the income their naked breasts might generate. What’s doubly ironic is that these celebrities gain value for their brands by appearing “socially progressive,” while the “no name” women urged to forsake any revenue for their nude photos are often viewed as sluts for doing the same thing.

Arguably, #freethenipple is a kind of nudist movement. Nudism is about desexualizing the (mostly female) naked body so men and women can hang out in the buff without worrying about (mostly male) arousal getting in the way. This is wishful thinking, not reality. Male arousal in the presence of a female body is the basis of life for heterosexuals. When women flash their tits, you can expect more erections, not fewer.

Of course women should be allowed to sunbathe topless and breastfeed wherever they want, but does that mean they should be freely showing their breasts on the web in the name of female equality? No. The Internet offers new, unique and safe opportunities for women to exploit the value of nudity by choice, and those opportunities are a separate matter from the right to feed your baby at McDonalds or to wear nothing but a bikini bottom at the beach.

8. Few women go topless even when they’re allowed to.

It’s actually legal for women to be topless in many states. But do we see lots of topless women in public? No. I’ve lived in NYC (where it’s legal) for years and I’ve never seen a topless woman on the streets. Why? While some might not wish to put up with the catcalls, I think the actual reason is that women know deep down that their breasts have unique value. No, they’re not all looking to monetize that value, but almost all of them are looking to experience it on their own terms and to share their naked body with the people they choose to.

Many women who charge for access to their naked bodies are staunch feminists. The pro-sex vs. anti-sex wars have been dividing feminists for some time, and the tension is now manifesting in a fourth wave of feminism that has its roots in the new performative and economic possibilities the Internet provides. #Freethenipple fails to address what women need to gain equality, power and freedom. Women need a movement that accepts the inherent value of female nudity, that takes into account that men and women are different in their sexual desires, and that supports women who monetize what is valuable about their naked bodies as well as the men who pay for access to them.

Given the above reasons, I feel compelled to launch the #paythenipple hashtag. As the Naked Therapist for over five years, I have conducted thousands of naked webcam therapy sessions, but I’ve always believed that men should only experience my nudity as part of their therapy. Watching #freethenipple grow into a huge feminist movement, embarking on a pro-sex music project, and having my Instagram account deleted for no reason have made me change my mind. I’ve launched a website, OnaGram, where men can now pay to see naked photos of me—the very photos I can’t post on Instagram free of charge. This is my way of demonstrating that I not only support #paythenipple, I also live it. Bottom line: We need #paythenipple so we can #freethewoman.

Do My Nipples Offend You?

Why Women Actually Need Twice As Much Sex As Men

This Is Why You Should Snoop Through Your Person’s Phone