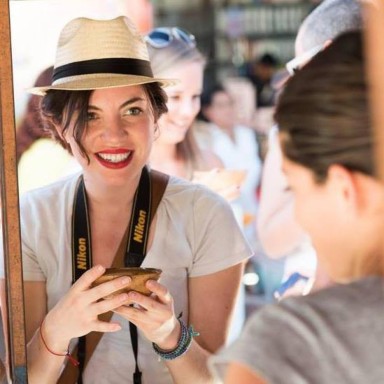 Ask anyone in New York and they will offer up their own version of when you cross the threshold from visitor to a true New Yorker. Some will say it’s the first time you spot a celebrity and shrug your shoulders indifferently, others claim it’s when you know the ‘unsaid’ rules of the subway system such as never going for the empty train car. Whether graduating to a New Yorker means stealing a cab, giving directions or becoming immune to the nose wrinkling smells of the MTA tunnels, there is one thing all New Yorkers can agree on: how to spot a tourist.

1. Keeping Up Pace with other New Yorkers

While working professionals push past in the classic New York ‘huff,’ you’re strolling through Times Square like you’re moseying down the white sand beaches of Aruba. If all New Yorkers have one complaint about tourists it is the slow and languid way in which they abruptly stop on sidewalks or stroll by taking in the skyscrapers and sights of ‘the concrete jungle.’

Be it downtown, Grand Central or the subway stations—if you walk slow, you will inevitably hear the inaudible grumbles and pointed sighs of stressed out New Yorkers lamenting the loss of the .5 seconds your pause has cost them. Although the childhood tale of the turtle and the hare will tell you that slow and steady serves you well, when visiting New York throw that lesson out the window.

2. Knowing the Unsaid Rules of the Subway

The automated voice tells you to “step back from the yellow line,” the police officers watch pedestrians like hawks and your guide of New York sits in your hands like a hand scribbled treasure map—the MTA subway system can be overwhelming, confusing and downright shocking. While basic rules–like don’t ride between the subway cars, lean on the doors or go on the tracks — are obvious to any visitor, it is the unsaid subway etiquette that will show the difference between a wide-eyed tourist and a hardened native.

Unsaid subway rule #1: If the incoming train is packed to the rafters with commuters and there is one empty car, do not fall victim to the siren call of those empty seats! While it may seem logical to comfortably sit in the spacious car rather than opt to be packaged in like sardines; that empty train car is deserted for a reason. Perhaps the car has a malfunctioning AC system on a hot summer day or maybe a homeless soul has decided to use the car as his personal restroom, whatever the reason for the deceivingly comfortable looking car it is a lesson all New Yorkers have learned the hard way and a trap all tourists fall for.

Unsaid subway rule #2: The subway system is an underworld to NYC, serving as a home to the weary, homeless, unstable and downtrodden. Despite its efficient layout and easy commutes it is unique to see business men in thousand dollar suits stand should to shoulder with hipsters with purple hair, who stand alongside moms with smiling babies, who are looking curiously at homeless men sprawled out across the seats. The subway is a mirror of New York and the many people that call this city home. That said, commutes (even morning ones) will sometimes bring you face-to-face with people of questionable sanity who may preach, monologue, yell or instigate conflict. Unsaid rule #2? Simply avoid eye contact and follow suit with other New Yorkers who look down and away.

Unsaid subway rule #3: If you move fast in subway stations, making sure not to disturb the beehive of New York’s underbelly, than you’re on your way to side stepping the scarlet letter of T for tourist. While keeping pace is an indication of your residency status, knowing how to swipe your Metro card and swiftly move through the turnstiles is just as important. God forbid, you swipe your card one, two, three times during morning rush hour!

3. Choosing your Allegiance Against New Jersey

Ask any New Yorker and they will agree with you on two things—yes, apartment prices in Manhattan are ridiculous and yes, New Jersey can’t hold a candle to New York City. True, we are practically elbow-to-elbow with the Garden State but although we share a path train we could not be more different. The secret truth is that although New Yorkers will pledge allegiance to the Empire State, we still seek refuge on Jersey’s sandy shores, underpriced beer gardens and calm neighborhoods that offer a respite from Manhattan—we just don’t admit it. From New Jersey, staying in New Jersey or preferring New Jersey? If you’re a tourist, roll with the punches and know we all secretly like our neighbor.

It’s said that New York has over 4,200 restaurants with Manhattan holding the bulk of the culinary scene and serving as home to over 3,500 eateries. We love food! We talk about it, blog about it, Instagram it, recommend it and always are armed with at least 3-5 recommendations on ‘in-the-know’ local spots. When we spot tourists in line for Applebee’s or Hard Rock Café in Times Square, we cringe; deciding to eat a national chain in NYC is like opting for McDonalds when visiting Italy—you’re instantly branded as a tourist.

5. Knowing How to React to Celebrity Sightings

I was new to NYC when I had my first celebrity sighting; Stanley Tucci was at a media party I was attending and I thought I was having nothing short of a panic attack. I had literally just watched The Devil Wears Prada during one of my take-out, couch-fest sessions and couldn’t believe Mr. Tucci himself was standing feet away from me. The next time I spotted a major celebrity, I was shopping for wine on the Upper East Side and barely noticed as Emma Watson, Hermione Granger in the flesh, was perusing for wine bottles right next to me. No panic attack, no sweat-inducing excitement…I had been down this road before.

Our city is home to many celebrities and stars and after some time our daily lives become so saturated with movie sets and celeb spotting that running into ‘what’s his face’ from ‘what’s that show’ starts to lose its luster. New Yorkers can spot tourists by the sheer giddiness of spotting a celebrity we saw just last week at Starbucks.

Some days the subway commute, slushy streets and pouring rain will create a perfect storm of annoyance and hatred towards New York City, while other days the magnolias blossoming over Central Park and sun cascading down the skyscrapers will fill New Yorkers with love. New Yorkers all have a love-hate relationship with NYC. For tourists, they will always see New York in shades of pink, letting the glitter this city can toss settle wonderfully over their eyes. To be a tourist in New York means never to lose that awe-inspiring image of a city where dreams are said to come true. So, let the New Yorkers brush by in a hurry, never looking up from their iPhones, so long as you’re a tourist in New York City, it will feel like the world is yours.

Nikki Vargas is a travel writer and photographer based in New York City with published work in FOOD & WINE, Matador ...